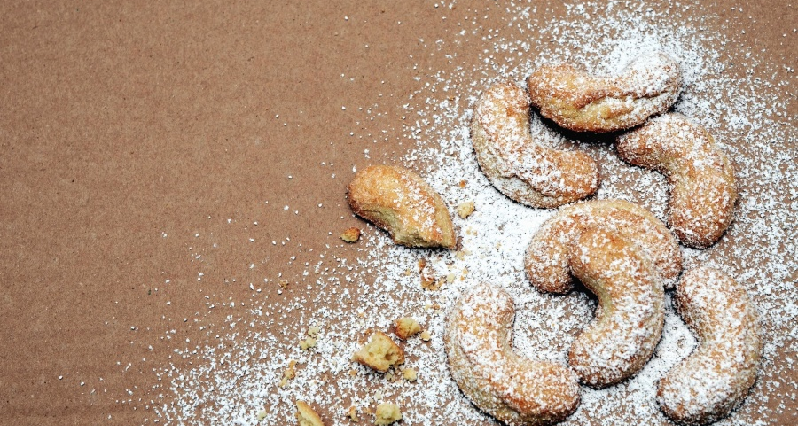 Sugar in foods is dangerous for a number of reasons. First of all, it feeds Candida yeast. As many of us are beginning to learn, the human gut is home to billions and billions of bacteria and yeasts, some good and some bad. Candida is a normal part of the gut flora, and as long as it stays under control, it’s not a problem. But sugar feeds the yeast, allowing it to overrun the good bacteria in the gut. When Candida gets out of control, the overgrowth can lead to a host of symptoms, including fatigue, gas, bloating, various skin conditions, chronic sinus infections, headaches, and recurrent vaginal yeast infections.

Sugar in foods is also dangerous because of the way it raises sugar in the blood. “Blood sugar” is a common name for the chemical glucose, and all carbohydrates – whether from potatoes, grains, beans, fruits, honey, or white sugar itself – must get converted into glucose before the body can use them as fuel. Foods that get converted into glucose quickly are called “high-glycemic”; foods that do so more slowly are considered “low-glycemic.” I believe that understanding this distinction is one of the half-dozen most important concepts for everyday health, and all of us should all have at least a rough feel for the glycemic value of the foods we eat. Two good books on the subject are Syndrome X, by Challem, Berkson, and Smith; and The Glucose Revolution, by Jennie Brand Miller.

High-glycemic foods (and few are higher than sugar) can wreak havoc with the body. Imagine, for example, a meal of pure refined white sugar. The sugar hits your stomach, and since there’s nothing for it to do there (the stomach primarily works on digesting protein, and breaking down chunks of food), it hits the small intestine in a matter of minutes. In the small intestine, it undergoes two very simple chemical reactions which turn it into glucose, then the glucose is absorbed straight into the bloodstream. Almost instantly, your blood glucose levels skyrocket.

When the body senses high blood glucose, its first reaction is to lower it. Simple enough, right? So the pancreas produces the hormone insulin, which lowers glucose by escorting it into the cells of the body. So some glucose goes to the muscle cells, to be used as energy. A lot of it goes to fat cells, to be stored as love handles. Some goes to the liver, where it is either stored or converted to fat and cholesterol.

When glucose levels get too high, the pancreas overreacts and produces too much insulin, bringing blood glucose levels lower than they should be. Low blood glucose can leave people feeling tired and grumpy, and craving the next sugary treat. And when they eat that treat, a vicious cycle ensues. Perhaps more importantly, low blood sugar is perceived by the body as a form of stress, just the same as stress out there in your world. And we all know how dangerous stress can be.

The problem can get a lot worse, too. After years of chronically high insulin levels, the cells of the body start to ignore insulin. And when insulin stops working, your blood sugar levels stay high. This is called Type 2 Diabetes. Chronically high blood sugar can damage the blood vessels, nerves, eyes, and kidneys. It won’t happen overnight of course. There’s nothing the matter with a really nice dessert now and again. But if you make sugar a major part of your diet long-term, it will happen.

If all this physiology gets confusing, let me simplify: practically every disease imaginable can, directly or indirectly, be caused or worsened by a high-sugar diet: acne, ADHD, lowered immunity, osteoporosis, heart disease, cancer… the list really does go on and on…

So what are the alternatives?

Brown Sugar, Sucanat, Rapadura, & other “natural” sugars: Brown sugar is white sugar with molasses added. Sucanat and Rapadura are unrefined dried sugarcane juice. They’re all basically SUGAR, with few more nutrients. Although the Sucanat and Rapadura aren’t bleached like white or brown sugar, and although they’re both basically “whole foods,” they’re still just as bad as white sugar in terms of spiking your blood glucose.

Molasses: When white sugar is made from sugarcane juice, this is what’s left over. It’s loaded with minerals, especially iron. But it’s still 90-plus percent sugar.

Honey: Compared to white sugar, honey is… not that great, actually. In fact, it sits higher on the glycemic index than white sugar does! And while people often cite the vitamins, minerals, pollen, and enzymes in honey, most honey is “pure” honey, with all those “impurities” removed! I do believe that a good, raw, un-filtered honey, is better than sugar. But if you sit there and eat it by the spoonful, it’s still going to hurt you.

Maple Syrup: The sugars in maple syrup are chemically almost identical to pure white sugar. Yes, there are traces of nutrients in there. But it’s still basically SUGAR.

Fruit Juice Concentrates: won’t spike blood glucose quite as badly as white sugar, brown sugar, or maple syrup, but still should be used in moderation. This goes for Agave nectar (“cactus juice”) as well.

Brown Rice Syrup, Malted Barley and other grain malts: These thick, syrupy sweeteners are much lower-glycemic than sugar, honey, fruit juice, etc. Note: this does not include high-glycemic corn syrup.

Maltitol, Sorbitol and Xylitol: These are all sugar alcohols (which means something very different to chemists than it might mean to you or me; to clarify, they do not get you drunk!). Sugar alcohols are actually very useful sweeteners. They don’t get converted to glucose too efficiently, so they won’t spike blood sugar like white sugar. They taste nice, and are finding their way into more and more candies and prepared foods. We have some maltitol-sweetened chocolates in the store right now which are surprisingly good! People with diabetes should be cautious with sorbitol, as it is linked to diabetic eye problems. Also, eating a lot of sugar alcohols can cause gas or even a laxative effect, although most people won’t have this problem with normal portions. Xylitol, especially, may actually be useful for health. It can reduce tooth decay, and one small, inconclusive study on rats (or was it mice?) suggested it might be helpful in terms of osteoporosis.

Stevia and Lo Han: Stevia is a South American herb, and Lo Han is native to the mountains of southern China. These herbal sweeteners are both hundreds of times sweeter than sugar, which means you need very little of them, which means you’re getting almost no calories or glycemic spike. Too good to be true? Well, I tried, I really tried, and I could find no reason to believe either of these is unsafe. Ask for a sample of stevia in March!

Sucralose (“Splenda”): This artificial sweetener is produced by taking regular white sugar (sucrose) and replacing three of its methyl groups with chlorine atoms. Chlorine, as you know, is toxic. Splenda, as you know, is legal in this country. The theory goes that the sucralose isn’t metabolized: it goes in one end, and out the other, so you don’t have to worry. There are indications, however, that it is damaging to diabetics. And according to the FDA, “Sucralose was weakly mutagenic in a mouse lymphoma mutation assay.” Ask any biologist: if it’s mutagenic, it’s carcinogenic, too. Avoid!

Saccharine (“Sweet ‘n’ Low”): The FDA actually tried to ban this one in 1977, because of some scary studies with cancer in rats. But since saccharine was the only non-caloric sweetener at the time, and people liked their diet sodas, Congress actually overruled the FDA.

Acesulfame-K (“Sunette,” “Sweet One”): Honestly, there is no clear evidence that there is anything wrong with this artificial sweetener. Still, I worry. The Center for Science in the Public Interest insists that the safety data on Acesulfame-K was very poorly put together and inconclusive. I really don’t know.

Aspartame (“Nutrasweet,” “Equal”): This artificial sweetener had been the subject of more adverse effects reports than any food additive in the history of the FDA. A lot of studies show it to be safe; a lot insist that it isn’t. Why that discrepancy, I wonder… Well, in 1996, Ralph G. Walton, a medical doctor, professor, and Chairman of the Center for Behavioral Medicine at Northeaster Ohio University analyzed 164 studies on aspartame – 74 that were sponsored by the aspartame industry, and 90 that were not. Of the 74 studies sponsored by the industry, every single one claimed that no safety issues were found. However, of the 90 studies not sponsored by the aspartame industry, there were only 7 that didn’t find at least one problem – and of those 7, 6 were conducted by the FDA! For the sake of your health and common justice, do not consume aspartame, and do not enrich the men and women who profit from it.