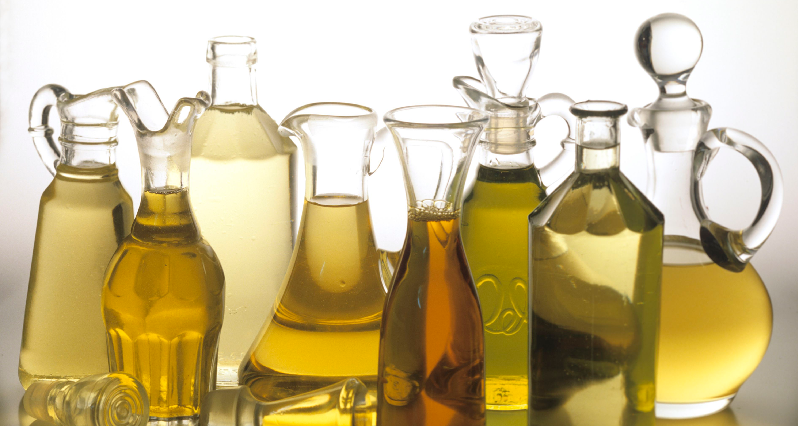 Good oils are like good spices: they’re not just instruments of convenience — they’re vehicles of flavor!

I’m not going to try and cover every oil, just the six I use in my kitchen.

Oil #1) A Decent Extra Virgin Olive Oil (EVOO): I use a lot of this, and so does the rest of the world. Olive-growing regions are still the largest consumers (Greece is #1), but India, Western Europe, Scandinavia; South, North, and Central America all consume more than we do. EVOO is a versatile oil, it’s a tasty oil, and it’s a healthy oil.

EVOO’s health benefits are well-established. Suffice it to say, EVOO is healthy on its own, and it’s healthy because, for most of us, it tends to replace unhealthy oils in the diet. (It’s also healthy because for Americans shopping in mainstream markets, it’s the only oil that isn’t filtered or refined).

EVOO is also among the most adulterated food products in the U.S. today. In other words, it’s quite possible that what you’re buying as “extra virgin olive oil” may be neither extra virgin, nor olive oil at all. A 2011 report out of UC Davis tested two dozen brands of EVOO bought in California, and found that only 31% of met the standards of a full extra virgin oil. And in recent years, the issue of adulteration with other oils entirely has been covered by the New York Times, the New Yorker, and the U.S. International Trade Commission. Arguably, the only food at greater risk for adulteration is honey.

So, how do you know you’re getting the real thing? First, taste it. Second, buy from somebody you trust.
• Usual uses: cooking everything.
• Temperature requirements: you can heat EVOO, but watch that it doesn’t start smoking.

Oil #2) A Very, Very Good Extra Virgin Olive Oil: The really good stuff has a distinctive sharp bite, sort of peppery and fruity, or whatever other adjectives might make a wine connoisseur blush. The thing is, all that goodness (the antioxidants called polyphenols) evaporates when you heat it. You don’t hurt yourself by heating it; it’s just a waste. So I save the really good stuff for a finishing drizzle. In our store, some examples of peppery EVOOs are Bariani Early Harvest, Eleones Early Harvest, Villa QRO.
• Usual uses: finishing drizzle on ravioli, Greek yogurt, chopped tomato salads, hummus; in pesto
• Unusual use: my favorite autumn salad, composed of sectioned blood oranges, walnuts, radicchio, coarse black pepper, EVOO.

Oil #3) Sesame Oil: One of my favorite taste adjectives is “earthy.” So it’s no surprise I love sesame oil, especially black sesame oil pressed from black sesame seeds. It has the earthy richness of toasted sesame without the bitter toasted bite. Deep and dark, it looks like a cross between dark whiskey & light molasses

Sesame seeds are a true superfood. Among many other benefits, they contain sesame lignans, compounds which modulate the ways in which our livers process fats. Sesame lignans lead to a reduction in blood triglycerides and cholesterol. They reduce underlying inflammation. There’s every reason to believe they reduce cardiovascular disease and dementia risk.
• Usual uses: finishing drizzle on Asian starchy or vegetable dishes (snow peas!), in marinades for BBQ, in dipping sauce for dumplings.
• Unusual use: with roast squash, or Black Sesame and Orange Zest ice cream recipe here: http://www.seriouseats.com/recipes/2011/01/black-sesame-and-orange-ice-cream-goma-recipe.html.

Oil #4) Coconut Oil: Every once in a while, there’s a truism about nutrition that just isn’t true. “Coconut oil is bad for you” is one such truism.

Epidemiological data exist linking saturated fat consumption with an increased risk for heart disease and cancer. Because coconuts are rich in saturated fats, many experts extrapolate that coconut oil would be bad for us.

Coconut MCTs have been proven to reduce blood triglycerides and cholesterol. There’s evidence that they may improve cognition in dementia. They possess antiviral and antifungal activity. They won’t make you lose weight, but they’re more likely to burn as calories than other fats. So replacing other fats with coconut oil will lead to a net decrease in stored calories.
Coconut oil is another rich tasting oil – yet oddly light as well. Food scientists often speak of the “mouth feel” of a food; coconut oil’s is sublime.
• Usual uses: Asian stir-fries, popcorn, to replace lard in recipes like fruitcake, roasted vegetables.
• My favorite use: oven-roasted carrots with cumin. This is a dish with exactly three ingredients. Roast them at 400 until they get wrinkly like toes from a bathtub.
• Temperature: no limits

Oil #5) Ghee: Ghee is clarified butter, i.e. butter without the milk solids. It’s a very traditional cooking oil out of India, and a very versatile one. Ghee can stand up to intense high heat. It keeps without refrigeration. And it has an incredible richness to it. Ever wonder how an Indian lentil soup can taste so rich and so satisfying – even though it doesn’t have the sausage, ham, or marrow that a Western lentil dish has? Often, it’s the spoonful of ghee.

Oil #6) Red Palm Oil: Palm kernel oil isn’t nearly as bad as it’s made out to be (although it’s not especially good for us, either). Palm fruit oil, on the other hand, has a lot to recommend it. First, it’s bright, bright jungle-red. That’s not only pretty; it’s healthy, too. We sell antioxidant capsules made from that bright pigment. It also stands up to very high heat. It’s not much for flavor. It doesn’t taste like much of anything.
• Suggested uses: popcorn, rice dishes, roasted potatoes, anything where you want beautiful color.