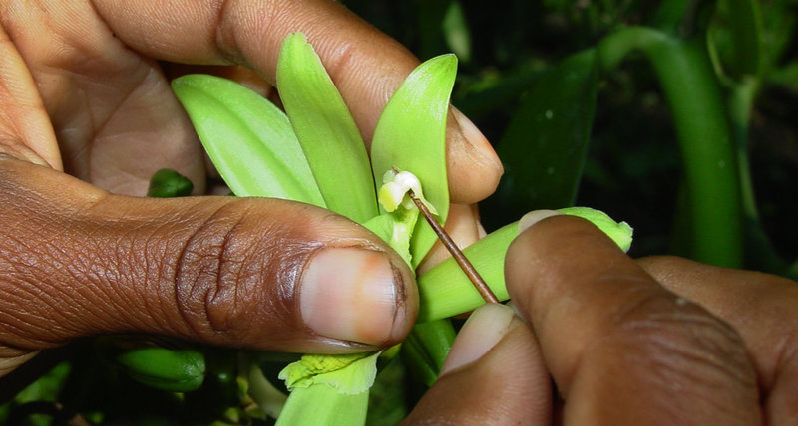 I am dismayed that so many food writers today bless using synthetic, imitation vanilla in our food. The fake stuff is touted as tasting more vanilla-y, tasting stronger, and who, they ask, can really tell the difference anyhow when there are so many other ingredients in a cake?

Real vanilla extract is important, they state, only if you’re making a custard or ice cream where the difference can be more easily detected.

This feels wrong to me on so many levels. Not only are we dissing Mother Nature (have you seen the lovely, tropical plant called the vanilla orchid?), but we’re saying the social connection with the farmers who grow the plants and harvest vanilla doesn’t matter.  We’re saying quality and artificial flavors don’t matter.

I don’t want to eat “foods” that aren’t foods, that are made from petroleum products, made with a chemical extracted from coal tar and wood, monkeyed around with in the lab to imitate a food. I don’t want to dumb down my taste buds with artificial flavors. Nor do I want to deprive myself of the 250+ compounds in real vanilla (this number according to Cook’s Illustrated), over and above the component vanillin, which is the one flavor component that is easily reproduced in labs.

I don’t want to eat ingredients such as propylene glycol or caramel coloring or refined sugar, all of which are used in the faux stuff. They are also used, perfectly legally, in some of the cheap vanilla extract knock-offs.

Which is also to say that not all real vanilla extracts are created equal. According to the FDA, “Vanilla extract may contain one or more of the following optional ingredients: (1) Glycerin, (2) Propylene glycol, (3) Sugar (including invert sugar), (4) Dextrose, (5) Corn syrup (including dried corn syrup.”

If you’re buying a quart of “real” vanilla extract for $15, it’s too cheap to be true. Most likely it contains some of the approved ingredients above.

So why have we gone the way of the lab? Price is certainly a major concern. We’ve also started making stuff in the lab because Mother Nature has provided a real challenge.

Remember the 2017 cyclone that wiped out 30% of the vanilla crop on Madagascar, the island that produces 80% of the world’s vanilla? That’s only one loving pat by Mother Nature.

Vanilla is said to be the world’s most labor-intensive crop. It is more difficult to grow and harvest than our most expensive spice, saffron.

Vanilla, says Lior Lev Sercarz, author of the book The Spice Companion, has a “single flower that opens up on only one day every year, and if you fail to pollinate it, that’s it. No vanilla bean.”

The bees have one day to pollinate the flower. The same for humans. One day.  That’s it. Until next year when there’s again only one day.

And making the extract from the pods, those beans, also takes patience and many steps until the beans are soaked in liquid, typically a mixture of alcohol and water (35% alcohol and a minimum mandatory standard of 13.35 ounces of vanilla beans per gallon of steeping liquid).

Vanilla is also scarcer nowadays because there are large food companies who pledged to stop using artificial flavors, and they’re competing for the world’s limited supply.

The good news is that more countries in the developing world are starting to grow vanilla orchids. Israel is experimenting with green house growing of the vanilla orchid.

If you’re shrugging your shoulders and say that the difference in flavor between the real stuff and imitation vanilla isn’t important to you, if you don’t mind eating petroleum products, does real vanilla have any health benefits?

Vanilla is said to have antioxidant, anti-inflammatory, anti-carcinogenic and antidepressant properties. And I like to think that I’m eating the kind of foods Adam and Eve had in their cupboards in the Garden of Eden. I like the fact that I’m not turning my back on farmers who are doing the kind of artisanal work done for thousands of years!

How do you pick a good vanilla extract?

Think what makes a bottle of fine wine fine. Think the same about a bottle of fine vanilla extract! Vanilla flavor differs because of the differences in climate and soil –but also by each region’s unique method of curing and drying. While vanilla is said to have first been grown in Mexico, today the vanilla orchid is found in Israel, Tahiti, Uganda, Madagascar, Indonesia and Papua New Guinea.

Our bakers, Tori and Nathan said that they felt the Madécasse vanilla has a more complex, rounded flavor. We’d like to know your opinion.

Want to make your own vanilla extract?  Of course, use vanilla beans that are first quality (yes, we have those!) In a clean jar, combine 16 ounces alcohol (vodka, rum, bourbon or brandy – I like vodka best because you can see it change color as the beans soak) with 4 whole vanilla beans.

Combine alcohol and the whole vanilla beans in the clean jar and put on the lid. Place jar in a cool, dark place for 2 months, occasionally agitating the beans (I shake the jar each day). At the end of two months, your vanilla will smell heavenly and you can start to use it. Leave the beans in the jar or, as my mom used to do, take them out and put them in your coconut sugar jar to flavor the sugar.

Cook’s Illustrated says, “Like taste in music, it’s a personal choice. Do you want to listen to a soloist or a symphony? Some people will never buy an imitation vanilla because it’s made from petroleum, because it’s not ‘real,’ because it’s not as interesting or complex, or because they want to support small farmers. Others simply cannot justify the price of pure vanilla extract, and that’s fair, too.”

My strong opinion? I’d rather pay a fair price for the best quality food and pay less for health care as I move through life…..I know I want the celestial notes and amazing taste of real vanilla!