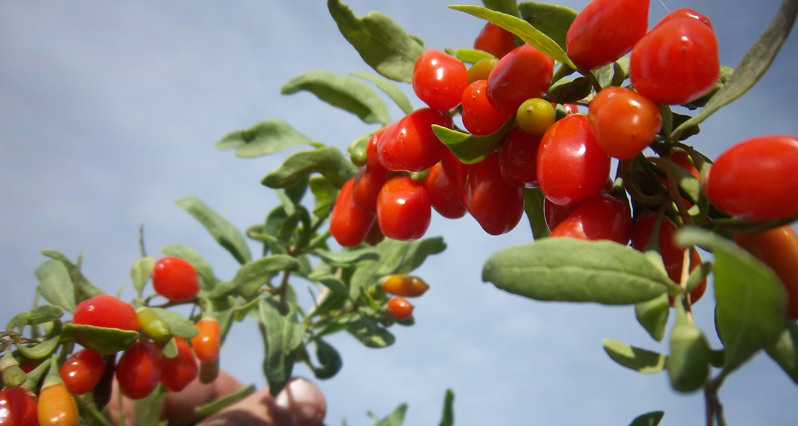 Fresh goji berries on the vine. Goji is one of many “superfruits” being marketed today — and one of the few that’s really worth it!

In the world of vitamins and minerals, herbs and oils, green foods and high-tech antioxidants, superfruit juices are a relatively new development.  But in the last decade really, in the last few years they’ve leapt into the mainstream with a vengeance.  Noni was first, after a woman got on the Oprah show and swore that it cured her of everything.  Then followed goji and mangosteen, pomegranate and acai, each one hyped as better than the others, a panacea, a miracle.

Why so much hype?  As each juice became popular seemingly overnight, regular health food stores and manufacturers didn’t jump on the bandwagon quickly enough, so these juices came to market largely through multilevel (i.e. “pyramid scheme”) marketing.  Multilevel is sometimes a bit dodgy.  While the products are often fine, the claims used to sell them tend to be overblown.  And while there are some honest and informed multilevel-marketers out there, the culture of multilevel marketing tends to encourage aggressive salesmanship at the expense of balance and objectivity[1].  Which is not to imply that the staff of regular health food stores (not to mention internet sales, acupuncturists, and doctors) are always objective, either…

Long before “goji” became the newest health craze, gou qi was a revered tonic in Chinese and Tibetan medicine.  Until recently, however, it was largely unknown outside Asia.  If most Americans had any awareness of goji, it was seeing what looked like a pile of bright red raisins in Chinatown, and asking “what’s that?”

In Chinese medicine, goji is a premier yin tonic, meaning that it is nourishing, cooling, and restoring; that it feeds the fundamental reserves of the body.  Traditionally, it has been used for general debility, to

strengthen vision and control diabetes, and with persistent dry coughs.  The herbalist David Winston quotes an ancient saying that advises not to eat goji “when traveling thousands of miles away from home.”  The idea being that it might make it difficult to stay faithful to your spouse, what with goji’s reputation to enhance desire.

Modern research suggests that goji might actually live up to its reputation.  Goji has been found in all sorts of animal research, under all sorts of conditions, to be broadly protective of the organs of the body.  To get into the nitty-gritty of this research would take all three pages I’ve got, so I won’t.  Suffice it to say Goji appears to protect the liver, the brain and nerves, the DNA, the spleen, the eyes, and the immune system, in a surprising variety of ways.  Admittedly, there are no decent human studies, but the sheer volume and variety of research in animals is impressive.  (And that’s not even getting into the research on sexual enhancement.  I’d love to get into that here, but it would have to involve repeated use of the phrase “mouse testicle.”  So, better not…)

Goji is over-hyped (like most of these juices are) mostly by people who exaggerate what the research concludes.  Just because something will protect a mouse from a specific kidney disease caused under specific experimental conditions does not mean that it will “profoundly strengthen the kidneys” under all conditions.  At this stage, it’s much more appropriate to talk about what goji might do for you instead of what it will.

There’s also a lot of “my-juice-is-better-than-your-juice” marketing.  This often has revolves around claims that someone’s juice is superior because it’s from Tibet instead of elsewhere in Asia.  No less an authority than David Winston, who has used goji for decades, says that the only difference with the Tibetan stuff is that it costs more.  Another common claim, that you should only buy a rare and unique species of goji called Lycium eleganus as also rather suspect there is no such species!

I have no personal experience drinking goji juice.  I’ve eaten the dried berries, though.  Didn’t do much for me, but they were nice.  You can munch them raw, add them to cooked food, throw them on cereal.  From what I gather, though, while the berries are nourishing and protective a nice daily immune food it’s the juice that people really feel.  We have three customers who buy the juice by the case because of the energy they say they feel, and the boost in libido (men and women).  In fact one woman bought six bottles for her mom, only after “warning” her of this potential side effect!

Of all the juices here, goji is the one I’ve been most impressed by in terms of the feedback I’ve gotten from healthy people.  The others might be more suited for specific diseases states, or be better antioxidants (or they may not…) but goji is the one people take and say they really do feel better.

I mentioned mangosteen in passing to my ex-girlfriend.  She said “what’s that ? a Jewish mango?”

Mangosteen is neither Jewish, nor a mango.  It’s a funny-looking little fruit from a tropical evergreen tree.  Outside, it looks sort of like an exotic, rough-skinned plum.  Inside, there’s something that looks like a cross between the sections of a tangerine, and somebody’s brain.  Maybe that’s not the most flattering description for this “queen of fruits,” but it’s the best I can come up with.  Traditionally, only the inside part (the “brain”) was eaten; the tough outer skin was discarded, or used as a medicine against dysentery.  However, supplements now use the whole fruit.

As I write this, fresh mangosteens are not allowed into the continental U.S. for fear they might carry the Asian fruit fly.  By the time you read it, however, that will have changed, and mangosteen fruits will be allowed in ? but only after they have been irradiated.

Lack of research doesn’t mean an herb won’t work.  Some of my favorite herbs (lomatium root as an antiviral; mimosa bark as a mood elevator) are very poorly-researched.  But unlike those herbs, mangosteen doesn’t have any history or tradition.

Who knows?  Maybe in five years I’ll be a convert; maybe not.  For now, however, I’m simply not ready to recommend this stuff at $37.00 (or more) a bottle.

Nicholas Perricone, best-selling author of The Wrinkle Cure, The Perricone Promise, and The Perricone Weight-Loss Diet, and famous for his appearances on PBS, calls açaí the #1 food for anti-aging.  Also called palm berries (they’re the berries from the tree that gives us hearts of palm), açaí is native to Brazil.

Everything that Perricone says about açaí is true.  For example, it is a wonderful antioxidant… but not that much better than blueberries or cranberries; the whole fruit does have good fats and proteins… but the fruit juice has no fat or protein.

I like açaí.  I throw some in my smoothie every now and again.  I know it’s good for me, very good for me even.  I just don’t think that it’s “special.”

Noni was covered in some depth a few months ago, so I won’t go into great detail again.  Suffice it to say, noni is primarily about balancing the immune system.  There’s no legitimate research, but in chronic autoimmune conditions and allergies, it seems to really help people.

Pomegranates are the lobsters of the fruit kingdom: delicious, but difficult to get out of their shells.  Many believe that the “apple” in the Garden of Eden was in fact a pomegranate!   Pomegranate is the least exotic fruit here.  We’ve all seen one before, and nobody’s claiming it will gives you energy, or make you younger, or attracts the supermodels to you like ants to honey.  But of all the juices on this list, pomegranate has the most solid research to back it: fairly large studies, good studies, human studies.

The most solid research has focused primarily on cardiovascular health.  In a number of trials, a small amount of pomegranate juice (usually a cup a day) has been able to reduce both cholesterol and moderately elevated high blood pressure.  Granted, other supplements have been able to show a more pronounced impact on these numbers.  But pomegranate is still a good idea, I think, because it’s easy (and enjoyable!) to take, and it has those 101 side benefits I’m always talking about.  The research is especially interesting, too, because some of it has looked not just at heart disease risk factors (i.e. the “invisible numbers,” like cholesterol and blood pressure), but noticeable symptoms of heart disease.  One study found that a cup a day for three months improved blood flow to the heart in coronary heart disease.  In another study, one month of pomegranate improved moderate erectile dysfunction.

There’s a fair amount of research, too, that pomegranate can prevent the skin from sun damage.  One study even found less freckling!  And while it’s too early to jump to any conclusions, the research so far appears quite promising that pomegranate might prevent various cancers, slow down osteoarthritis, and protect against prostate enlargement.  I’m really excited to see where this research leads, and I would not be at all surprised if it turned out amazing.  In fact, if I had to list my ten healthiest foods (always very arbitrary), I’d put pomegranate up there.

[1]The problem, I believe, with multilevel marketing, is that the salespeople are so invested in what they’re selling ? emotionally and financially ? that it supercedes critical thought.  To put it another way, when you’ve got $600 worth of goji juice sitting in your garage, you’re going to be pretty motivated to sell it.

Many of these people are well-intentioned insofar as they believe what they’re saying.  But often that belief comes from little more than gung-ho sales trainings.  Go to any multilevel website, and you’ll see ads trumpeting, not just the efficacy of the product, but “six-figure income opportunities” and the like, all very optimistic, all very vague.  For a laugh, check out http://gojiexpress.com/index.cfm?fuseAction=main.CID_01_003, where you get to hear the Himalayan Goji Juice Song motivate the sales force like only a bad rock’n’roll anthem can (“Making your stride/Are you ready for the ride?/The million-dollar berry is on your side!”) As the herbalist Alan Tillotson says in his guide to Evaluating Herbal Information, “There are a lot of good guys in the natural foods and herbal medicine world.  ‘Good’ doesn’t just mean good-hearted.  To me, it means good-hearted, well-read and endowed with critical thinking skills.”  His essay is a lot of fun, actually.  Check it out at http://oneearthherbs.squarespace.com/evaluate-information