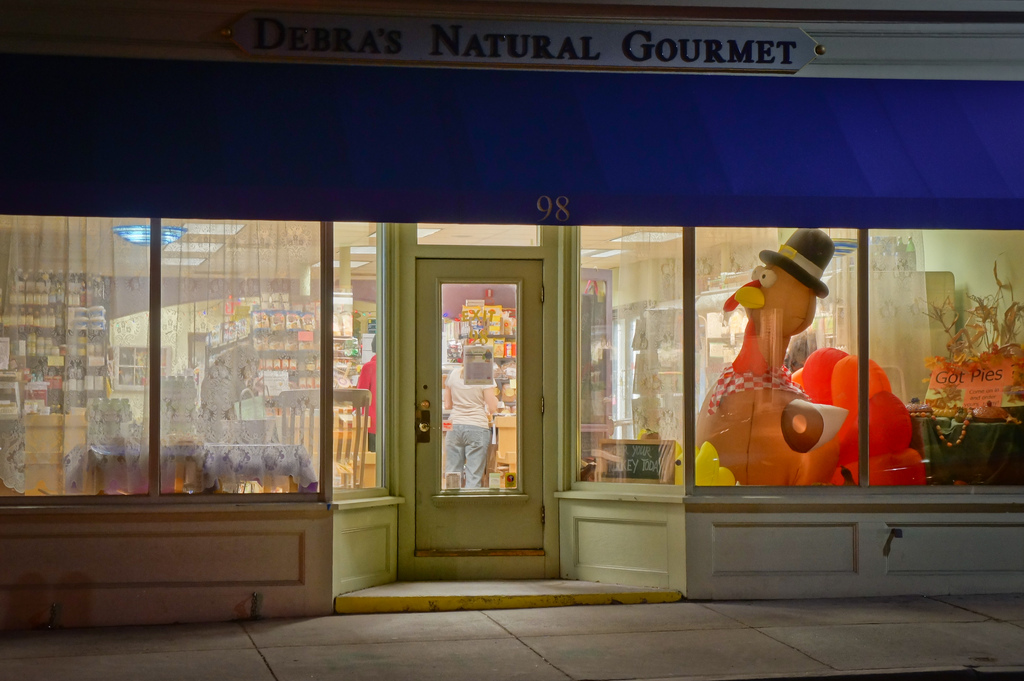 Photo of inflatable turkey in our window courtesy Igor Motov.

The day we finally bought our space and became masters of our own destiny, it occurred to me: we have 68 different kinds of lip balm.

The day before, when everything was still up in the air, it occurred to me: this place feels like home. On that day, a customer came up to me and told me that the store was an “anchor” in her life, a safe place, a constant. She could always count on us to be there. And by that, I gather, she didn’t just mean be in a place, but to be there, for her, in ways that were unnamed-able.

I told her I felt the same way.

But I couldn’t tell her about the building, the fact that it was on the open market and we might not get it, might be homeless in less than a month when our lease was up, might not be there any more.

We didn’t have a Plan B. And frankly, I was scared.

Now, we have the space. And an enormous mortgage. And 68 different flavors of lip balm. These 68 flavors (and this number is constantly fluctuating) say something important about Debra’s. It isn’t very efficient. It doesn’t reflect a Master Plan. I doubt they teach 68 flavors at business school.

These 68 flavors, added one at a time, reflect the community, what Wendell Berry calls a membership, that is the store, both its staff and its customers, extending outwards to its vendors, and its vendors’ suppliers, and finally, to the farmers who bring food from the Earth. We stock Skye Botanicals lip balm, because Martha decided, independent of anyone, that it was too good not to have. Also, she knows Monica Skye, knows that Monica wildcrafts her own herbs. We stock Burt’s Bees beeswax lip balm because Barbara says the peppermint oil in it makes her lips “tingly.” We stock Mode de Vie Karité-Lips because of Debra. She likes that it contains Shea butter, which is closest of all butters to the oils found in our own skin. We stock Carlson vitamin E lip balm because John and Susan Carlson have been in business for all the right reasons since 1967. Now their children and grandchildren are part of the company. We stock The Merry Hempsters vegan lip balm because one of you told Jim you couldn’t live without it. We stock Galen’s Way lip salve-ation because my ex-girlfriend knew the man who made them, and always said he was a great guy.

(Congratulations, too, to Tony at the Walden Italian Kitchen next door, who now owns his space as well.)