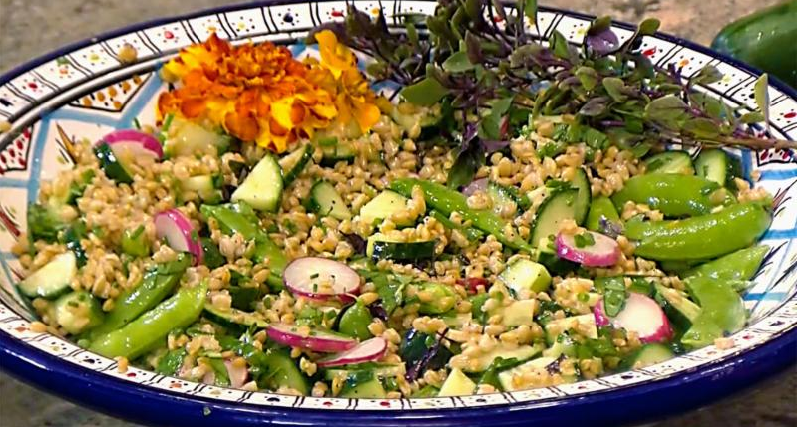 Farro, an heirloom wheat, is said to be the first grain ever domesticated by humans, was grown in what was called “The Fertile Crescent” of the Middle East. The Fertile Crescent, in case you didn’t know, is the location of the biblical “Garden of Eden!” And farro fed the Roman legions on their marches too.

As new varieties of wheat were created through hybridization, farro somehow lost its favorite status.Today, however, farro is one of several ancient whole grains that we are bringing back. Yeah!

I find when I eat these ancient grains, my tummy feels happy. When I eat modern, changed wheat in somebody’s home or at a restaurant, I don’t feel nearly as good. Do you think our modifying the genetic makeup of food affects our health and well-being? Do you think it makes a difference?

But back to farro, it’s actually a class of grains. There’s farro piccolo (einkorn), farro medio (emmer), and farro grande (spelt). Emmer is what you’ll find sold most often in the U.S. Emmer is harder than einkorn, and I’m sure there are more distinctions too. Just try whatever farro you can get (yep-we’ve got it) in risottos, salads, even dessert (think rice pudding).

Place farro and water in a small pot with a tight-fitting lid. Bring to a boil, lower heat, cover pot and simmer about 45 minutes. Farro will have absorbed the water and still be a little chewy, which is perfect for salads. Let farro cool while you get the rest of the ingredients into a large bowl. Then add farro and mix everything together. Season to taste with salt and pepper. Serve the salad garnished with lime wedges and basil leaves (or garnish with extra radish or diced cucumber – all your choice).