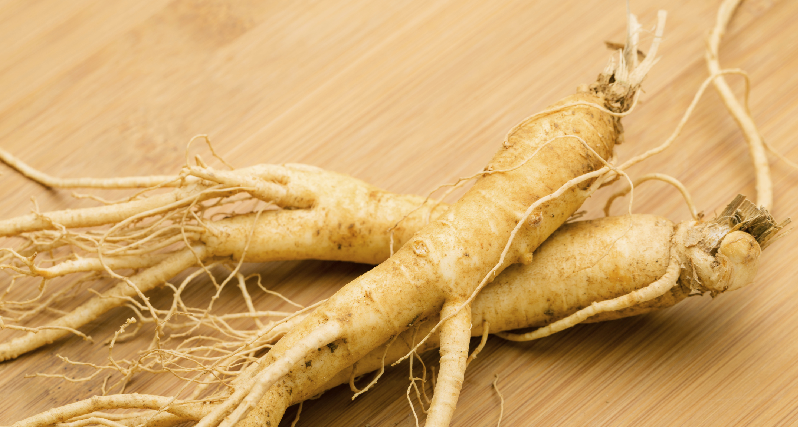 Ginseng (latin name Panax Ginseng) is indeed a Panacea… largely by mitigating the effects of daily stress on energy, vitality, and immunity.

This isn’t about running marathons, although it could be. It’s not about lifting freight cars off of kittens, amped on adrenaline.  This is about the daily energy that gets us out of bed with a spring in our steps and a twinkle in our eyes; that maintains our focus throughout the day; that keeps us lively even after work, and the kids are put to bed.

So, where do we start?

Well, coffee sure does the trick. I’m a big fan of coffee, actually.

And if you really want to get into it, there’s an impressive body of research demonstrating that moderate coffee consumption is actually good for most of us. But coffee isn’t a sustainable answer to the energy problem. Coffee doesn’t add to our energy reserves, as much as it mobilizes those reserves for immediate use. It’s great in a pinch, but we pay the price later.

So let’s look a little more holistically. Actually, let’s start by looking at four things that sap our energy in the first place.

1. Emotional Stress and Anxiety. This is an obvious one. But it deserves pointing out. Try three deep breaths, yoga, meditation, listening to some music (or playing it). You know the drill. Or try to externalize the stress by sharing it with a friend, journaling about – or exhausting yourself with exercise. Beyond all the lifestyle stuff, there are also herbs and nutrients which can quiet the mind and soothe the soul. It’s beyond the scope of this article to really get into that, but you can read a little more here https://debrasnaturalgourmet.com/anxiety-and-panicpart-ii, or any one of a million other place; or feel free to come in and talk to some of the knowledgeable people on staff: myself and Debra, Jay, Mary, Tyler, Jocelyn, Grace, Cindy, etc.

2. High blood sugar/low blood sugar. High blood sugar actually makes us feel energized. Eat a candy bar and see. But the body doesn’t really “like” high blood sugar. It senses all those circulating calories, and it says “let’s save those for later.” So insulin kicks in, and those calories are sent into storage. Some are stored in the liver as glycogen, which can be quickly released, by adrenaline (or caffeine). Most, however, are stored as fat, which is harder to mobilize.

Even when you’re not gaining weight, the big problem is that when blood sugar is too high, the body tends to “over-lower” it. So you end up with low blood sugar. (Again, eat a candy bar and see). You’re grumpy and irritable and hungry (you want another candy bar!), and you start feeling tired. Not to mention you might be moving towards diabetes.

Marathoners can carbo-load before a race, because they’re going to be running 28 miles and using all that energy. The rest of us, we want to focus on slow-, steady-burning protein, fat, and fiber.

If you always feel tired an hour or two after dinner, consider a smaller dinner. If you always feel tired around lunch, consider a larger breakfast, or at least one higher in protein. Shoot for 30 grams. That’s four eggs’ worth, or a scoop or two of protein powder in a shake. If you feel low energy every afternoon around 1:00 or 2:00, try the protein-for-breakfast thing for three days…

Some of our weight loss supplements (glucomannan fiber and green coffee extracts, especially) work by blunting the blood sugar spike following meals. So consider them as well, if you want to kill two birds with one stone.

3. Sleep deprivation. This one is obvious. Again, it’s beyond the scope of this article. Again, feel free to come in and talk about it.

4. Dehydration. I’m not kidding! Drink water, and see what happens. As a general rule, drink enough so your urine is clear-colored. Bear in mind, B-vitamins can color the urine yellow, so take three days off from them to make this test work.

5. Other underlying medical conditions, and medications. How’s your thyroid? Is your antidepressant making you tired?

Anyways, what can we do, herbally and nutritionally?

1. Take a look at “kinder” caffeine sources. Coffee is great, because it gives you that jolt. But the flip side of that jolt is often a crash, proportional to the jolt.

Consider Yerba Mate or Guayasa teas instead. Both contain alkaloids similar to caffeine, a little weaker than caffeine, but longer lasting.

Also consider green tea. The caffeine in green tea is no different than the caffeine in coffee, but it’s buffered by another substance called theanine. A lot of you probably already know about theanine, since we wrote about it a few years ago for calmed focus, healthy sleep, etc. In 200-mg pills, it really does work. The lower doses in tea, on the other hand, smooth out the rough edges of caffeine.  Green tea can leave you ever bit as alert as coffee, just less jumpy — and less worn out as it wears off.

2. Take a long look at herbs like ginseng. Ginseng is often misunderstood. People think it’s a stimulant that gives you energy; that it makes you stronger and smarter. Actually, ginseng is an adaptogen that helps you respond to stress. It doesn’t make you stronger or smarter; it just keeps stress from maker you weaker and dumber.

When you really get down into it, stress is in play – to a lesser or greater degree – any time you’re not sleeping. Even without obvious stressors like anxiety, low blood sugar, sleep deprivation, or running a marathon, there’s always something, subtly eroding our reserves.

So adaptogenic herbs are useful no matter what. However, they become especially useful when dealing with a lot of stress.

Some of my favorite research to illustrate how this works has been done with the herb Rhodiola. In one study, people were given a single dose of Rhodiola or placebo before being asked to proofread a series of documents over 24 hours, without sleep.

Right out of the gate, everybody was proofreading at roughly the same rate, catching errors at the same rate. As the day wore on, however – as fatigue set in – the placebo group started making more and more mistakes. The Rhodiola group also declined in accuracy, but not nearly as much. At the end of the 24 hours, the Rhodiola group was making only one mistake for every seven the placebo group was making.

Another study tracked med students during a three-week exam period, taking rhodiola or placebo throughout.  Here, the students taking rhodiola scored better on tests of attention and focus; slept better, reported being happier, and had greater motivation to study; could run farther on a treadmill, and got better grades on their actual exams. The improvements weren’t huge. But they were there, across more than ten different measures of stress and fatigue.

It’s worth emphasizing one of those improvements: they slept better. You see a lot of that with adaptogenic herbs: on one hand, they energize us, but on the flip side, they calm and relax us, too. They make us “right.” (They also help mitigate other impacts of stress: lowered immunity, increased strain on the heart, inability to keep inflammation within healthy limits…)

Exactly how many herbs are true adaptogens is open to debate. But the core group we can all agree on include Asian ginseng, American ginseng, rhodiola, eleuthero (sometimes “siberian ginseng”), ashwaghanda, and jiaogulan. They all accomplish roughly the same things, but with different “tones.” So Asian ginseng is a little more stimulating (without being a stimulant). Ashwaghanda is my favorite relaxing adaptogen for high-strung folks with plenty of superficial, nervous energy. Rhodiola may be the best “white-collar adaptogen,” when the stressors are less emotional and physical than cognitive. (Think 3rd-year med students, start-up entrepreneurs, accountants around mid-April…)

Jiaogulan is worth looking at because it’s a leaf, instead of a root. So it extracts easily into water. Look especially at the Spring Dragon tea from Dragon Herbs, which has been one of our best-sellers for almost a decade.

While we’re on the subject of brand-name products, let me name another one. Shakti Chai from Golden Lotus botanicals is a wonderful powdered drink mix, something like an herbal coffee, but so much more. A lot of adaptogens, plus raw cacao, liver tonics, and sort of (but not really) coffee-tasting roots, it mixes in hot or cold, with water or milk. They make a version both with and without gentle caffeine sources. If you’re looking for a coffee replacement, start here.

At the end of the day, don’t try to hard to find the “perfect” adaptogen for you. It’s hard to go wrong with any of them. Combination formulas often work the best.

3. Cordyceps is a unique medicinal mushroom that increases oxygen uptake through the lungs, among other deeper tonic functions. I absolutely adore this herb for athletic (aerobic) endurance, and wakeful alertness. It works quickly. Expect to notice something within an hour, with liquid extracts on an empty stomach; and within two hours for tablets on a full stomach. I find it’s especially useful for trained athletes, where lung capacity is more of a limiting factor than general lack of conditioning. I’ve also found it to be quite helpful in “senior” folks who start needing afternoon naps.

I’m an especial fan of the cordyceps products from the Host Defense company, which I’ve been using (under a variety of different labels) since 1999. I also want to give a shout out to a very simple three-herb formula called Cordyceps Tablets, put out by the Pine Mountain company. It’s a simple combo of cordyceps, plus two adaptogens.

4. Bee Products – Royal Jelly and Pollen – also have roles to play. Royal Jelly is the superfood that bees feed their queen. It’s a premier chi tonic in Chinese medicine, and has been treasured in Russia and the U.S. as an energy and endocrine tonic. It helps produce strong, supple connective tissue (read: nice skin), and qualifies as a legitimate “anti-aging” nutrient to boot. It is one of my very favorite supplements for nourishing deep, vibrant well-being. The fresh refrigerated stuff is wonderful. Or perhaps consider a Chinese formula called Ren Shen Feng Wang, which combines Royal Jelly with ginseng, goji berries, reishi mushroom, shizandra berries, and Chinese red sage.

While Royal Jelly is a gland tonic, the pollen gathered by bees is more of an energy food. A teaspoon or two chewed-up on an empty stomach (it tastes kind of musty, but not too bad), is great for that last 30 minutes of the hike – or the first 30. It’s wonderful for making you feel lean and efficient on an empty stomach, instead of hungry and shaky.