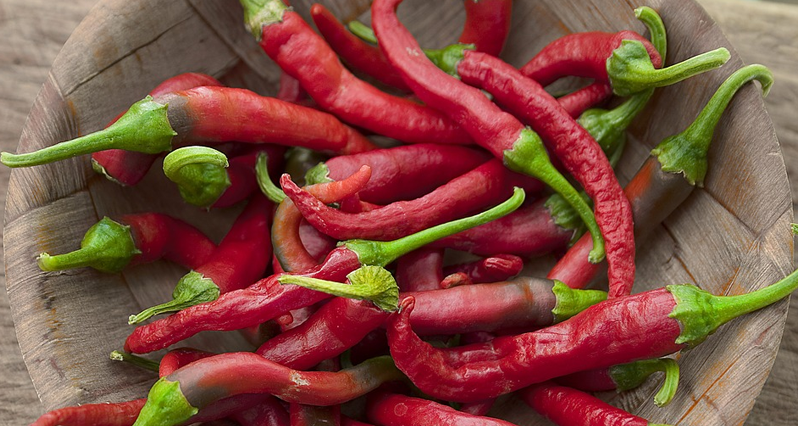 I suppose the icy depths of winter would be a more appropriate time to cover herbs that are heating and spicy.  But now is when the mood strikes, so, here goes.

Actually, summer might not be such a bad time for this, after all.  Traditional South American, Asian, and Indian cultures don’t back off the spice just because the temperature is rising.  On the other hand, the Eskimo’s aren’t exactly known for their spicy cuisine (or much any cuisine, for that matter).  Cayenne pepper sends circulation to the surface.  It might make you feel warmer, more flushed for a bit, but in the end it might cool you: heat at the surface is more easily dispersed than heat at the core.

Despite what I just wrote, which might seem counterintuitive, most of us still have a pretty intuitive grasp of the hot and spicy.  We all sense that ginger, cayenne, and wasabi decongest us, and stimulate circulation.  Even people who don’t believe that herbs “work” will still tell you that ginger helps the digestion, and that wasabi sure clears the sinuses.

Don’t spicy herbs give you heartburn?  The simplest answer might be to say that everyone is different, and that trial and error is the best way to tell.  That being said, there are two major kinds of heartburn, reflux and ulcer.  Reflux that is being treated poorly i.e. by suppressing stomach acid, and not improving the functioning of the stomach itself usually is made worse by spicy food.  Reflux that is being treated well usually will not suffer from spicy food.

In terms of ulcers, there have been a number of studies where spicy foods some of the most potent, cayenne and wasabi, among them have actually prevented or even healed ulcers.  The one exception here is ginger.  Ginger is generally wonderful for digestion due in no small part to its ability to digest protein.  For that same reason, however, it should be used cautiously in ulcers, where the exposed stomach lining can be digested as well.

If spicy foods have a “heating” energy, are there “hot” times I shouldn’t use them?  Summer, when I have a fever, or when I’m having hot flashes?  See above, about summer.  As for hot flashes, all I can say is try ‘em and see.  I’ve certainly known a few women who would go into a flash when they ate spicy food, but there are also plenty who don’t.

Types of Spicy Herbs: The Radishes: These are the edible roots of Brassica family plants, the family that includes cauliflower, broccoli, and cabbage.   These include the “normal” radishes (the term “garden-variety” could be a bit confusing here), as well as horseradish, daikon, wasabi, etc.

Perhaps the most obvious things radishes do for us is clear the sinuses.  The spicier the radish, the better.  But the most impressive thing they do, to my mind, is among the least obvious: they help detoxify cancer-causing compounds.

They do this by stimulating liver function, but do it differently than other plants.  You see, the liver does most of our detoxifying, and for most types of toxins, it does so in two stages.  The first stage takes toxins out of the bloodstream.  The second neutralizes them.  The problem is, if the first stage is outpacing the second stage, the liver ends up accumulating toxins that have not yet been neutralized.  Not very good for the ol’ liver!

(Actually I’m oversimplifying: radishes protect the body from toxins and the cancer they promote in other ways, too).

Like I said, there are quite a few herbs that are more effective than the radishes at protecting the liver from toxicity.  Milk thistle, picrorhiza, and reishi mushroom are just a few that come to mind.  But in terms of helping the liver protect the entire body from toxicity, radishes are unparalleled in herbal medicine.  So, did your spouse just go and spray an entire can of insect killer in your bedroom with the windows closed?  Well, now is the time to go to a hotel, or stay with relatives.  Barring that, reach for the wasabi.  Painting the house?  Working with toxic solvents?  Reach, again, for the wasabi.

Next month: radishes, continued, plus cayenne (including the amazing story of Samuel Thompson!), ginger, and black pepper.