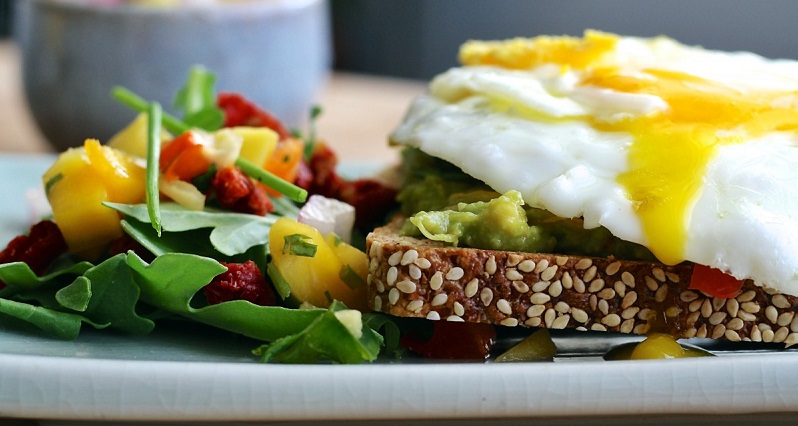 The foods will be different, but they’ll taste the same.  Sound too good to be true? Read on…

1. DON’T JUST EAT FOR YOUR OWN HEALTH, BUT EVERYONE ELSE’S HEALTH, TOO.

Compare a chocolate bar from fairly-traded cocoa, to an “identical” chocolate bar, made from the “same” chocolate harvested by child slaves. It may or may not be better for you, but it’s definitely better. We’re talking about Fair Trade here, and it’s important where you can get it, but it’s especially important with coffee, tea, chocolate, sugar, and bananas.  Fair Trade is only one of many ways we can eat “better.” We can buy food from a farmer we know treats her land well. We can buy from a kitchen we know treats their staff well. By making the right choices here, you preserve land, support communities, and encourage meaningful lives. (Yes, really!)

2. UPGRADE YOUR FATS AND OILS.

You don’t have to give up anything, to switch generic “vegetable oil” out for something better. You won’t have to cook any differently, and the food will taste just as good – or better. As a general rule, look for oil from fruits (avocado, olive, palm), tree nuts (almond, pistachio, macadamia, coconut, etc.), and edible seeds (pumpkinseed, sesame, hemp, flax).

Where to start? Try these five (in alphabetical order):

Coconut Oil: For years, we’ve been told that coconut oil is an “unhealthy tropical saturated fat.” It’s all true!  Except for the “unhealthy” part…

I’ve never seen a single study actually showing any ill effects associated with coconut oil. I have, however, seen plenty where coconut oil lowers cholesterol and blood triglycerides, helps maintain a healthy weight, and supports the health of the liver. It has some antiviral properties. And there have been some interesting claims (so far unsubstantiated) that it can help with Alzheimer’s.

Coconut oil is also DELICIOUS, and here I’m talking about more than just flavor. Coconut oil has that elusive quality that chefs and food technologists crave: a tantalizing mouth feel. Soft winter veggie curries and crisp summer veggie stir-fries both welcome coconut oil’s richness. Use coconut oil to grease a pancake pan, or as the shortening in pie crusts and flourless desserts. Every Christmas, native British store manager Jim Leahy makes plum pudding for the whole staff – using coconut oil instead of lard, coconut sugar instead of white sugar, and whole wheat flour. It’s devoured in minutes! Popcorn popped in coconut oil is divine. (Do it yourself at home, or pick up bags of that new brand we sell).

Grapeseed Oil: You know all the wonderful things people say about olive oil? Well, grapeseed oil does basically the same things, only it doesn’t taste like olives. When you want an oil that’s basically flavorless…

Olive Oil: You’ve heard about this one already. I won’t go into it here.

Red Palm Oil: from the palm fruit, not the palm kernel, this oil is jam-packed with carotenoid and tocotrienol antioxidants. Plus it is deep, deep, deep red, which is kind of fun. Palm oil plantations are known for displacing orangutan habitats, so stick to brands that work work around this problem.

Sesame Oil: Sesame Oil is rich in sesame lignans, which help us metabolize healthy fats, and protect the liver and blood vessel walls. Sesame oil can easily overpower delicate flavors. It also smokes at even moderate heat.  So you want to use this one as a finishing oil. Try a drizzle to finish stir-fries, or over grain dishes. Or the classic Chinese dipping sauce of roughly two parts each soy sauce and vinegar (rice, plum, or black vinegar), one part sesame oil; minced ginger, and scallions floating on top. I especially like the oil made from black sesame seeds. See below about black sesame seeds.

I’m sure there are some exceptions out there, but it’s true 95% of the time: when choosing between similar foods, choose the one that is darker.

Plants usually produce pigments to protect themselves – from light, heat, and disease. These pigments can also protect us. There are lots of little bits of evidence for this: one study showing black rice bran reduces cholesterol better than brown rice bran, another showing that rabbits live longer when they get dark lettuce vs. pale lettuce. And of course the thing with red wine vs. white wine. Etc., etc.

Modern sauerkraut, pickles, and kimchee are generally made by soaking vegetables in an acid-and-salt brine. This isn’t necessarily unhealthy, but it’s a far cry from how healthy it could be.

Old-fashioned sauerkraut, pickles, and kimchee were made differently: by letting the vegetables ferment with live cultures, much like yogurt is made by fermenting milk. This was done, not just to make the food delicious or healthy, but as a way of preserving vegetables before refrigeration.

It turns out this fermentation doesn’t just preserve nutrients, it creates them. So you end up with something that aids digestion, supports the liver, promotes immunity, and helps the body detoxify. And, if done right, it’ll taste just like “normal” pickles, only better.

It has been debated, and it will continue to be debated, exactly how “good” organic food is, and how “bad” pesticide-raised food is. Most of the anti-organic crowd will point to studies showing that organically-raised vegetables don’t have more of this-or-that vitamin or mineral than their conventional counterparts. Fair enough. But I will respond with three points:

That last point then leads to even more debate about how much poison is safe, and it’s an interesting debate at the level of science, but it’s a foolish debate at the level of your family’s health. We simply cannot conduct the sort of trials needed to quantify what such-and-such a level of pesticide is going to do to you over the next 70 years, especially in the context of the complex stew of everything else you consume, or don’t consume. So what if a pesticide is “safe,” for a rat, for 12 months? Is a high dose for a year “equal” to a low dose for 50 years? Do other pesticides reinforce or multiply the effects of the first one?

Personally, I eat non-organic foods if they’re served to me, or if I’m out, or if a particular batch of blueberries just looks super-duper-delicious; or if the only black sesame oil I can get isn’t organic. But I do take this seriously, and I’d encourage you to as well.

Nothing against organics, but even organic meat, chicken, milk, and eggs might come from animals that are fed poorly in confined conditions. I mean, it’s a step in the right direction to feed a cow a diet of organic soy-corn-soy-corn-soy-corn-soy-corn-etc. But it’s still a poor and imbalanced diet.

A truly grass-fed/pasture-raised/free-range animal, on the other hand, should be able to roam freely. It may have its feed supplemented in the wintertime, or in times of drought, but should be able to forage for a lot of its feed most of the year. The balance between anti-inflammatory omega-3 fats, and pro-inflammatory arachidonic acid skews hugely between factory-fed and free-range eggs. There can be a literally 10-fold difference in the ratio, not to mention increased levels of antioxidants, and lower levels of cholesterol.

And those are just the nutrients we are starting to quantify. There’s a lot more going than that. And it brings us back to #1: Don’t Just Eat for Your Own Health…