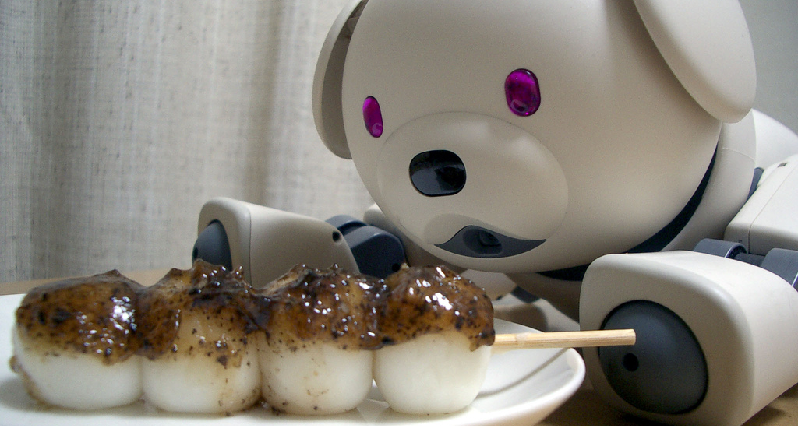 Is engineered food only for engineered beings?  (Photo of robot dog with traditional Japanese food courtesy of Hiroaki Maeda via Create Commons).

This article ran first in the Concord Journal

In March of this year, Whole Foods Market announced a commitment to full GMO transparency by giving their suppliers five years to source non-GMO ingredients, or to clearly label products with ingredients containing GMOs.

Well, that’s good for the rest of us because Whole Foods has clout. As a national, natural products supermarket chain, when Whole Foods says something, many manufacturers jump.

What are GMOs anyway? They’re Genetically Modified Organisms that result when genes from one species of bacteria, viruses, insects, animals, or even humans, is forced into the DNA of another species. This does not occur in nature or in traditional crossbreeding. GMOs are like science fiction!

In case you’ve forgotten as I sometimes do, most genetically modified crops are engineered to survive application of weed killers. So instead of spraying this weed here, and that weed there, farmers (should we call them “agribusiness technicians”?) can blanket their whole fields in these toxic weed-killers.

Some GMOs are engineered to produce poisons to kill bugs. They are little chemical factories!

Do I believe that all GMOs are forever-and-ever inherently bad? Maybe, maybe not… I think I’m always going to be afraid of introducing some gene-spliced life form into the environment, where it can reproduce and take over, and maybe wreck the ecosystem like no superweed we’ve ever seen (talk about “science fiction!”) Certainly, I’m against anything engineered to bring more poison into the environment – which means the vast majority of GM crops today.

GM crops and the chemical products (glyphosates) applied to them are like “The Creeping Unknown!” (Remember that horror film from years ago?) We just don’t really know what GMOs and glyphosates do to the environment, soil, or human health.

GM crops and the chemical-class, glyphosates, are banned in 27 countries around the world. GM products are labeled in 64 more. In our own country, there is NO right to know, there is no labeling on that bag of corn chips or package of Twinkies.

In our own backyard, MIT scientist Stephanie Seneff and consultant Anthony Samsel wrote an article in which they said that they are concerned that GM plants (such as RoundUp-Ready Soybeans and Corn), and RoundUp (which is what glyphosate is often called), are contributing to diseases as far-ranging as inflammatory bowel disease, cancer, infertility, cystic fibrosis, cancer, Alzheimer’s and Parkinson’s. They worry that RoundUp “…may be the most biologically disruptive chemical in our environment.”

We do know that the RoundUp chemical, glyphosate, kills normal bacteria in the human gut, which leaves room for the bad bugs to proliferate. And it also blocks the gut’s ability to crate serotonin, the happy chemical.

Seneff and Samsel ask whether the RoundUp residue now found on our food enhances the damaging effects of other food-borne chemical residues and toxins in the environment. They worry that the negative impact on the body is “insidious and manifests slowly over time as inflammation damages cellular systems throughout the body.”

While touted as a boon to the environment and a way to produce more food, the truth is that since GMOs have been introduced into agriculture, increasing amounts of weed killers and pesticides are required on fields where GM crops have been planted. It took Mother Nature about three seasons to create superbugs and superweeds that got around RoundUp… Environmental Protection Agency (EPA) data reveals that between 2001 and 2007, 185 million pounds of glyphosate was used by our farmers, double the amount used in the previous six years.

And we now know that GM crops do not withstand drought better, do not produce more food to feed the world, are not better plants.

So if GM crops don’t feed us better and require more and more pesticide and poison, does it make sense to keep planting them?

We keep planting them, I think, solely because they’re a great business model!

If we decide we want food the old-fashioned way, the way it’s been grown since the beginning of time, there are several things that have to happen concurrently. Individual farmers have to want to transition from GMO to organic and sustainable methods.  We have to want to buy the organic and sustainably-grown food our farmers grow. We have to back our farmer up and put money on the table!

I’m proud to say that this past summer our local farms advertised that their corn was either organically-grown or grown sustainably from Non-GM seed. [By the way, “organic” prohibits the use of pesticides and herbicides like RoundUp in addition to prohibiting sewage sludge, antibiotics, growth hormones (RBST or rBGH) and irradiation in the growing and production of food.]

If you put in an organic home garden this summer, I’m proud of you too!

What are the 10 foods being grown as GM today?

Which makes me realize most Halloween candy contains GMOs and will have glyphosate residue….

At risk nowadays are animal products (milk, meat, eggs, etc.) because of contamination in feed. And now because animals may be fed GM alfalfa!

Someone asked, “What about potatoes?” GM potatoes were introduced by Monsanto in 1996. Due to consumer rejection by several fast-food chains and chip makers, the product was never successful and was discontinued in the spring of 2001.

This shows us how powerful our buying habits are. We can and do make policy with our $s. The Institute of Responsibility Technology’s Jeff Smith says if 5% of consumers in this country stop eating GM foods, we can create a tipping point and get food manufacturers to remove GM ingredients, which, of course, theoretically gets farmers to stop planting GM seeds and growing those crops, and retailers from buying them to sell to you.

An aside here: Animals don’t always have that choice, but when given a choice, cows, pigs, geese, squirrels, elk, deer, raccoons, mice and rats will not eat GM food, unless forced to do so.  In farmer-run tests, cows and pigs repeatedly passed up GM corn. Instinctually, animals know something we don’t.

If the big companies are so proud of their GM crops and think they’re the best thing since sliced bread, why don’t they want that info on the labels of your box of cereal?

How can you avoid GMOs today? Buy organic, sustainably grown food. Stay away from processed food unless it has the Non-GMO Project verification label, or at the very least, stay away from processed food that has any of the GM crops as ingredients. That’s going to be a challenge at Halloween…[In October, come look at the cartoons in our store window by cartoonists Joe Mohr and Hal Hefner.]