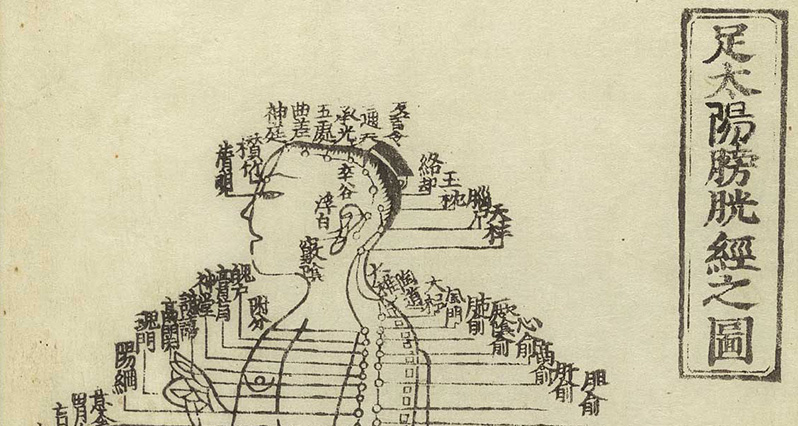 Portion of a 14th-century acupuncture chart. Chinese medicine has a wonderful formula for quickness to temper.

Is there really an herb for this? How quickly does it work? And how can we slip it into someone else’s coffee without them noticing?

Okay, in all seriousness, it isn’t that easy.  Yes, there are herbs that can help. But none of them are magically effective. None of them take the place of those major life changes we might want to prescribe for others, or perhaps reach out and grasp for ourselves. None of them can accomplish what meditation, mindfulness, or a solid night’s sleep can. Having said that…

Easy Wanderer (Xiao Yao) is a famous Taoist herbal formula that’s been around for about 400 years.  It’s said to remove obstructions to the harmonious flow of qi, dissipate heat, and clear stagnation from the liver. If you’re a Westerner (like me), that probably sounds poetical, vaguely attractive, but hard to grasp.

As far as I’m concerned, Easy Wanderer is all about pent-up anger and frustration – the sort of feelings that lead a child to throw tantrums, or an adult to get snappy. “Irritability” is a key word, with or without outbursts. Easy Wanderer can be great for PMS, incidentally.

The noted scholar of Chinese medicine Subhuti Dharmananda explains that Easy Wanderer “helps overcome the ingrained personal approach of clashing with – rather than flowing around – a difficulty that is encountered.” (Dharmananda’s wonderful paper on the formula can be found online at http://www.itmonline.org/arts/xiaoyao.htm.)

A standard dose will usually start to be noticeable in about a week, although for PMS, you’ll probably want to run it through at least a full monthly cycle. Bear in mind, you may feel more irritable for a few days in the beginning as the “heat” – i.e. the pent-up anger and frustration – is released.

Again, as a Westerner, with a Western understanding of anatomy and physiology, it doesn’t quite fit into my standard worldview, but I’ve seen the formula work. Easy Wanderer combines well with mood elevating herbs in treating depression; with adaptogenic herbs when dealing with fatigue/sleep-deprivation.

Omega-3 Fatty Acids (most commonly found in Fish Oil) are great at elevating mood, and there’s a solid body of research to prove it. Having said that, what really impresses me here is some of the research linking fish oils to a reduced rate of violence and assaults. What’s especially impressive is that the research isn’t out of a lab or a university, but a very “real-world” environment: the prison systems.

Two studies, one out of the U.K., and the other out of Holland, found that when inmates were given fish oils plus a standard low-dose multivitamin, prison assaults and other markers of “antisocial behavior” fell by over a third vs. prisoners given placebos.

While it’s possible these results could be attributed to the vitamins, almost all the research suggests it’s the fish oils. There’s also research out of Finland showing that people arrested for violent crimes have lower blood levels of omega-3s; and research out of this country showing that people who consume more fish oils murder people less. For mood, the most important thing is the amount of eicosapentaenoic acid (EPA) your supplement contains. A standard starting dose would be 1,000-2,000 mg EPA daily.

Honorable Mentions include the herb Bacopa for impatience, and adaptogenic herbs like Ashwagandha and Rhodiola for fatigue-irritability.