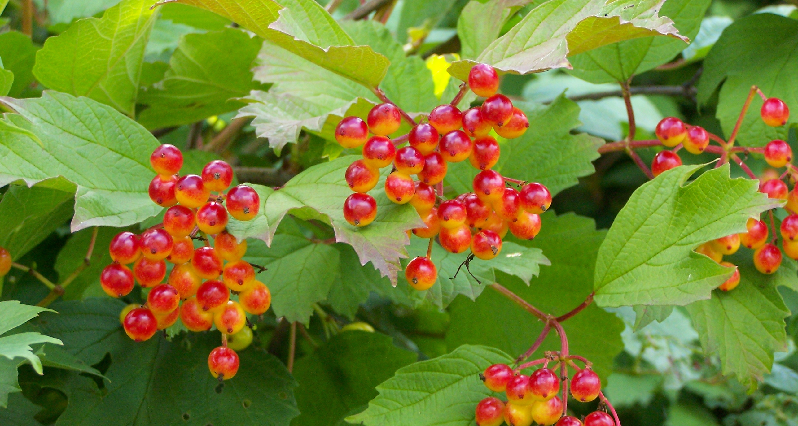 Cramp Bark is an herb whose name says it all…

Another month, another topic, and yet another opportunity to write about fish oils. Truly nothing in natural or conventional medicine (with the exception of exercise, stress reduction, and a balanced, whole foods diet) is as effective in preventing and treating so many conditions! While there is, for any given condition, something that works better for that specific condition than fish oil, I always recommend fish oil first because its “side effects” include reduced risk of heart disease, cancer, Alzheimer’s, osteoporosis, and depression.

Fish oil supplements are useful in treating the mood symptoms of PMS. This isn’t surprising, especially when you bear in mind some of the recent research on fish oil and depression. But they don’t seem to help much with the physical symptoms such as cramping and bloating.

So what does? Krill oil. Krill is a sort of plankton, a little microscopic plant that produces the same kinds of oils fish do. But Krill oil also contains phospholipids, antioxidants, and other compounds which work synergistically to alleviate not only the emotional symptoms of PMS, but the physical ones as well. This was shown by a recent study with 70 women in which Krill oil was compared, not just to a placebo, but to a good-quality fish oil. Not only did the women on the Krill oil have fewer emotional symptoms, they also reported using far fewer painkillers during their periods after 3 cycles. The dosage was two capsules a day for a month, then one a day after that.

And Krill oil should have all the side benefits of fish oil. Krill oil is also especially rich in the antioxidant, astaxanthin, which Debra has written about in the newsletter a number of times.

This is one of those natural therapies that not only makes sense, but really seems to work… but which simply hasn’t been formally studied. (It has been studied in menopause, however). Still, I feel very comfortable recommending it. Quite a few women I’ve known have used it and liked it. A number of respected alternative doctors report great success with it in their practices. And of course there were the wonderful books on this subject by John Lee, M.D. (I once heard John Lee speak. I was impressed by his intelligence, commitment and humor, and was saddened to hear of his death last October).

John Lee coined the term “estrogen dominance” to describe a common hormone imbalance in women with PMS. Simply put, there’s a constantly-shifting balance during a woman’s cycle, between estrogens on the one hand, and progesterone on the other. The two hormones play off each other, complement each other, and oppose each other in various ways. In estrogen dominance, there is either too much estrogen, or too little progesterone. Progesterone cream can restore the balance.

Unhealthy estrogen dominance appears to be especially pronounced during the second half of a woman’s cycle , when progesterone is normally supposed to rise (and the progesterone rising, in turn, should reduce estrogen – there truly is a lot of interplay between the hormones). It is this combination of insufficient progesterone and/or unopposed estrogen which can be at the root of a number of PMS symptoms.

Progesterone can absorb through the skin into the bloodstream, where it functions just like our own natural progesterone. In her Women’s Encyclopedia of Natural Medicine, Tori Hudson, N.D., gives guidelines on using the cream:

In my clinical practice, I largely use the transdermal creams that contain more than 400 mg [of progesterone] per ounce of cream. For severe PMS symptoms that have not responded to nutritional, botanical, and lifestyle changes, and for those whose symptoms start from a few days to one week before the menses, I recommend applying ¼ tsp natural progesterone cream twice daily starting at mid-cycle and stopping the day before menses is due. For women whose significant symptoms begin at ovulation, I recommend ¼ tsp per day from day 8 to day 14 (do not use during days 1-7 while bleeding), and then ¼ tsp twice daily until the menses begin, as described above. The best sites for rubbing in the cream include the palms, inner forearms, chest, and inner thighs. Also, it is best utilized when rotating sites of application. Individual use may vary depending on symptoms or menstrual pattern.

Most women who have menstrual cramps started getting them soon after their first period. In fact, if your first case of cramping takes place more than two years after your first period, Tory Hudson suggests getting a professional diagnosis to rule out such things as endometriosis.

Women who smoke or are overweight tend to have worse cramping.

For many women, there’s no better quick fix than the herb Cramp Bark (Viburnum opulus, or its cousin, Black Haw (Viburnum prunifolium). While they’re very closely related to each other, and are often considered interchangeable, Tori Hudson does make a distinction:

When the pains are of either a congestive or spasmodic nature and include low back pains, especially if the pains radiate down the thighs, there is no better herbal choice than cramp bark.

[Black haw] has been historically used as a specific medicine for menstrual cramps with severe low back and bearing-down pelvic pains. For menstrual pains associated with a profuse menstrual flow and intermittent severe pains, black haw would probably be a more specific choice than cramp bark.

Once again, fish oils can be very, very helpful here if you stick with them a couple of cycles. In addition, cutting back on foods rich in a competing oil called arachidonic acid might be very helpful. This means cutting back on all animal products except for wild game, eggs, and fish.

While oils rich in GLA such as evening primrose oil and borage oil are often recommended and can be helpful, I would not recommend trying them until you’ve exhausted your other options. GLA is slowly converted into arachidonic acid in the body, and (although this is just theory right now) it could possibly make things tougher in the long-term.

I’d look at Niacin (vitamin B-3). In one study, over 85% of women who took it experienced relief from painful cramping. The dose was 100 mg twice a day over the entire cycle, then 100 mg every 2-3 hours during episodes of cramping. Niacin can cause a “niacin flush” in some people: you tingle, turn red, and look like you’re blushing. No harm done, but it can be uncomfortable and look funny for a half-hour or so. So don’t say I didn’t warn you!

This article could have been written without the excellent Women’s Encyclopedia of Natural Medicine, by Tori Hudson – but it would have been a lot more work! I recommend this book very highly. Check out page 185 for an exercise plan that helps menstrual cramps!

A woman’s menstrual cycle is counted off in relation to the onset of bleeding (day 1). So for a 28-day cycle, the second half would began 14 days after bleeding started, not 14 days after it stopped.