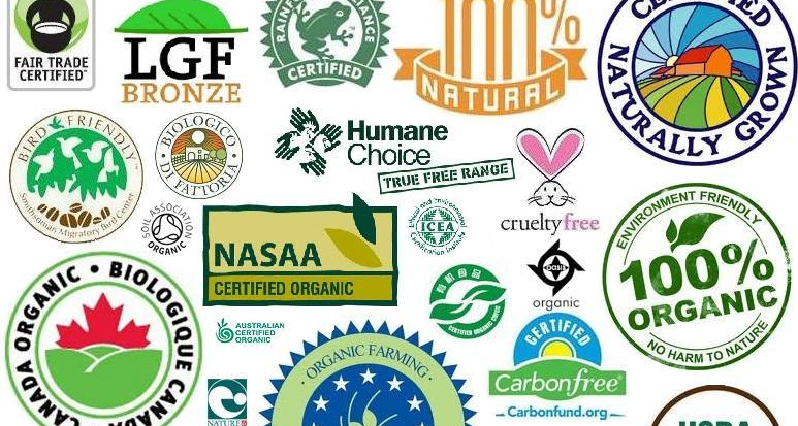 Food packaging these days can look like a sky full of stars, each star an insignia, each insignia displaying an attribute that’s (ostensibly) important to us.  But what do they all mean?

Most of us have a rough idea what organic means: grown without synthetic pesticides, herbicides, or fertilizers, on land that has been clean for at least three years. No sewage sludge as fertilizer, no genetically modified organisms (GMOs: see below). Food must not be irradiated. For animal products, no anti-biotics or synthetic hormones, and the animals must be fed organic feed containing no animal by-products. (A recent amendment to national organic standards allows animals to be fed non-organic feed if it costs less than half of organic feed).

Food labeled “Made with Organic Ingredients” must be at least 70%. If it simply says “Organic,” it has to be 95%. “100% Organic” should be self-explanatory…

Organic food is not allowed to touch non-organic food, which is why you often see organic produce wrapped in layers of plastic wrap. Great. So now when you want to do something good for the environment it has to come wrapped in a non-recyclable petroleum product…

The biggest gray area in organic labeling is in the body care and cosmetics industry, where some manufacturers use questionable math to count plain tap water towards their percent-organic rating. They list ingredients like “organic herbal infusions,” which are little more than organic flower petals steeped in thousands of gallons of water. All of a sudden, ordinary tap water is magically transformed into an “organic” ingredient and counted towards the total organic content of the product. Hopefully, there will be a law against this soon, but for now, buyer beware.

means non-organic, no holds barred. Transitionally-Grown food meets organic standards, except the land hasn’t been clean for a full three years. Personally, I’d be more concerned about transitionally-grown root vegetables than above-ground fruits. And remember, when you buy transitional produce, you encourage conventional farmers to make the switch!

As the organic movement is increasingly co-opted by the organics industry, many of our romantic notions of small farmers carefully tending the land have been replaced by the reality of industrial factory farming – albeit without pesticides, herbicides, etc. It’s a step up from conventional agriculture, but it still leaves a lot to be desired.

Enter Biodynamic agriculture. Biodynamic principles require us to treat the land not just as a high-efficiency revenue-generating factory, but as a complex, diverse, holistic ecosystem.

The applications of biodynamic principles are too complex to fully detail here. But in talking with an acquaintance who is just beginning to farm biodynamically, I am constantly impressed at the dedication and artistry she applies to her work. She plants particular herbs as natural insect repellants; others, to be tilled under in a year to enrich the soil. There are bees for pollination and animals for manure (why import it?) In the end, there won’t be 100 identical acres of wheat, but a patchwork quilt of complementary plants and animals. You get the sense that she isn’t just farming a year’s crop, but a lifetime’s stewardship of soil and water.

GMO stands for Genetically Modified Organism, describing plants, animals, bacteria, and fungi that have been created by splicing the genetic material of one species into another’s. Products are not required to list GMO content on their labels.

The most common GMO crop is Monsanto’s Roundup Resistant soybean, genetically engineered to resist Roundup-brand herbicide. The idea is, you can plant a thousand acres full of these soybeans, and then douse the entire area with Roundup, expediently wiping out every single living plant but the cash crop. Other GMO crops include corn with genes from Bacillus thuringiensis (“Bt Corn”), which produces a protective insecticide which is also toxic to the Monarch butterfly, and, presumably, other benign organisms (think this is controversial, but not necessarily true????). Tobacco genes have been introduced into corn so it can better withstand frost. Golden Rice incorporates genes from both daffodils and a bacterium to raise vitamin A content. And there’s the controversial “terminator technology” to produce seeds which will grow sterile crops, locking farmers (and all who depend on farmers) into a cycle of dependency in which they must buy new seeds every year from the large biotech firms.

I do not believe that biotechnology is inherently evil, and at some future day, it may make a real impact on global hunger and malnutrition. But that day has not yet come. GMO crop yields are not skyrocketing; food costs are not plummeting. And meanwhile legitimate safety concerns remain as we continue to introduce living organisms into the environment which cannot be recalled, and which are cross-pollinating with and contaminating natural crops. As the saying goes, “GMOs: now, pollution has a life of its own.”

Somewhere, on a plantation halfway around the world, a man works a 15-hour day for 3 cents an hour picking coffee beans so his children don’t starve – and so we can enjoy our $4.65 double-tall decaf cinnamon mocha cappuccinos with whipped cream on top. There is often a huge disconnect between the items on a store’s shelves, and the labor that got them there; between what is to us disposable income, and, to others, survival. Fairly-traded products ensure workers are paid a living wage, paid according to what a product is worth to us; not according to what it’s worth to an international commodities broker looking for the cheapest price he can get.

There are three parts of any grain: the bran, the germ, and the starch. The bran is the outer protective coating, full of fiber; the germ is the part that germinates (sprouts), full of good oils, antioxidants, minerals, and B-vitamins; the starch is full of little more than big fat carbohydrate calories. “Whole grain” means you get the whole grain. “White” or “refined” means that some or all of the bran and germ are removed. (And please don’t be fooled: the terms “wheat bread” and “wheat flour” tell you only what grain they were made from, not how it was processed – ninety-nine times out of a hundred, it’s refined, white wheat. Even whole wheat may not be 100% whole wheat. When in doubt, always read the ingredient list, not just the name!)

Sounds good, doesn’t it? But ask yourself, what exactly are the so-called “impurities” we’re removing? Pure water could have chlorine and arsenic removed. It could have infectious bacteria removed. It could also have valuable minerals like calcium, magnesium, and zinc removed. Pure honey has “impurities” such as pollen, propolis, and royal jelly removed – which we are happy to sell you separately at a premium!