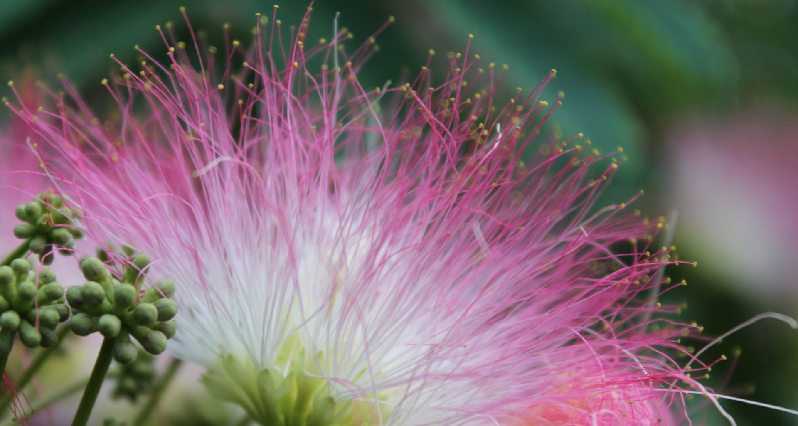 A Silk Tree blossom. Silk Tree, a.k.a. Mimosa, Albizia, and He Huan (Chinese for “The Tree of Happiness”) is one of our most powerful and revered medicines for depression.

Okay, so the title is a little misleading. Most of this article is going to discuss fish oils, which we’ve known about for a few years already. The rest is going to touch on the Mimosa tree, which the Chinese have been using for a few millenia, but which I just learned about… Anyways, they’re both new to this newsletter, so let’s get started.

Fish oils are even effective even in major depression, which is no small thing.  Not overnight, perhaps, but give them a month or two, and most people see very significant results. They are also quite possibly the most versatile nutrient off a health food store’s shelves. Fish oils can be useful, not just in depression, but just about whatever is going wrong with the brain, including ADHD, autism, bipolar disorder, schizophrenia, anxiety, and Alzheimer’s. They also show real benefit in arthritis, heart disease, osteoporosis, cancer, diabetes, psoriasis, and autoimmune disorders. And believe me: this is just the tip of the iceberg. For example, long-term, high-dose fish oil supplementation has even been shown to decrease propensity to sunburn!

Beyond even all this, fish oils are great because they don’t just override the biochemistry of depression, like most pharmaceuticals and many supplements do. They don’t interfere with the brain so much as they help it to manage itself properly. I know that sounds awfully vague, but if I had to explain the science, it would get awfully complicated. (If you are interested in the real biochemical nitty-gritty, check out “Neurobehavioral Aspects of Omega-3 Fatty Acids: Possible Mechanisms and Therapeutic Value in Major Depression” in the November, 2003 Alternative Medicine Review. You can find it on-line at http://www.thorne.com/altmedrev/.fulltext/8/4/410.pdf)

What To Look for in a Fish Oil

Before we get to the clinical research, a little background on fish oils is needed. Fish oils contain healthy fats with vitamin-like properties called omega-3 fatty acids. More specifically, fish oil contains two important omega-3s abbreviated EPA and DHA[1]. It’s the amount of these, not the total amount of fish oil that we need to look for in product. And when it comes to depression, it’s the EPA specifically that you’re looking for. Yes, I know that many reference books still talk about DHA as the major player, but they are flat-out wrong[2].

(This does, however, raise the issue of EPA:DHA ratio, which is, as far as anyone can tell, completely irrelevant to a product’s efficacy. Yes, EPA is the important part of fish oil, but that doesn’t mean it will work any better if you take out the DHA! And when you see a high EPA:DHA ratio, you know that you’re paying someone a lot of money to take it out. Of course none of this stops companies from claiming that their high EPA:DHA fish oils are superior to standard products).

When taking fish oils for depression, you need a fair amount – often significantly more than companies suggest on the back of their bottles (companies suggest these low doses, I think, so as not to scare people away). The very lowest dose I have ever seen used in a research study for depression where it actually worked is 1 gram (1,000 mg) per day of EPA. Many studies have used much higher doses, including one on bipolar that went as high as 6.2 grams.

How Much to Take?  And for How Long?

How much should you take? That’s a tough question to answer. It really does depend on the individual. I’d start with 1 or 2 grams a day of EPA. Again, many studies have used higher doses.

Interestingly, however, one study actually suggested that higher doses were less effective. This trial followed 70 patients who had suffered from persistent depression despite being on pharmaceutical antidepressants. They stayed on their drugs, and in addition, began taking 1, 2, or 4 grams of EPA per day, or a placebo. The placebo group, and the 2 and 4 gram groups showed no benefit. The 1 gram per day group, on the other hand, showed significant improvement. More than half the patients in this group showed a better than 50% improvement in their depressive symptoms.

Fish oils are very safe, even when taken with prescription antidepressants. Occasionally, they’ll upset someone’s digestion, and there are some concerns about taking them with strong blood-thinners.

One final note: as many of you know, there are two families of essential fatty acids: the omega-3s, found in fish oil, and the omega-6s found just about everywhere else. Both are crucial to life, and have far-ranging benefits in the body. In many ways, however, the two families actually oppose each other, competing to get processed and used. So the more omega-3s you take, the less omega-6 activity you have and vice versa. Some very interesting research has just recently begun to shed light on this omega-3/omega-6 balance as it relates to depression. To make a long story short, we’re beginning to see hints that depressed brains aren’t deficient in omega-3s so much as that they have an excess of omega-6s. Which would imply two things: 1) to maintain balance, you’d want to take more omega-3s the more omega-6s you consume; and 2) maybe you want to consume less omega-6 in the first place. Of course this was animal research. And who knows what we can extrapolate from a genetically depressed rat to a situationally-depressed person?

Silk Tree: The Tree of Happiness

The other “breakthrough” is the Mimosa Tree (Albizzia julibrissin). It’s a relatively obscure herb, even in traditional Chinese medicine. In the West, it’s practically unheard of. There’s no real research on it, and it doesn’t show up in most reference books.

But Mimosa Tree is starting to turn some heads, ever since two of the most well-known and respected herbalists in the U.S. started speaking about it in glowing terms. David Winston, the noted Cherokee/Chinese/Eclectic herbalist, calls it the best herbal antidepressant he uses in his practice, describing it as specific for letting go of grief and healing a “broken heart.” Michael Tierra, the Ayurvedic/Chinese herbalist, writes: “I have used Mimosa or Albizzia flower and bark extract alone or in formula for large numbers of people who might otherwise be given pharmaceutical antidepressants. All have experienced complete or significant benefit even after a day’s use. I recommend taking one half to one teaspoon three or four times daily. While its flavor leaves something to be desired, it has shown itself to be completely safe, and after experiencing its positive effects, one quickly grows used to the flavor. Called the ‘tree of collective happiness’ by the Chinese, mimosa flowers are specifically used by them for individuals who are experiencing deep feelings of grief and loss. This is truly one of the most beautiful trees to behold. Its dramatic branches evoke a spirit of freedom and grace. It is deciduous and when it bursts into leafy floral wonder in the late Spring and early Summer, its fernlike leaves and beautiful flowers are indeed a celebration of the most positive feelings of joy and beauty in the natural kingdom.”

I personally have no experience with this plant (other than seeing one flowering in downtown Cambridge…) [Note from 2018: Since writing this, I have plenty of experience with this plant, and it is WONDERFUL!]  So I’d love to get feedback from any users. The flowers and bark are both used. The flowers (He huan hua, in Chinese) are considered by some to be more “uplifting,” whereas the bark (He huan pi) is considered more “anchoring.” So far, I have not seen the flowers in supplement form. We will have them in bulk, however, to make tea. And they are beautiful.

[1] Flax, hemp, perilla, and other vegetarian foods also contain omega-3s, but in forms not easily used by the body. [2] For years, people focused on the DHA because it’s a major part of neuronal cell membranes. They just assumed that, since it’s in the brain, it must be the part of fish oil that’s needed for the brain. Recent research, however, has emphatically shown that it’s EPA which elevates mood and reduces inflammation. Yes, DDHA does have roles in the body. But considering all that EPA does – and the fact that we can make DHA from EPA, but not the other way around – high-DHA supplements simply don’t make sense.