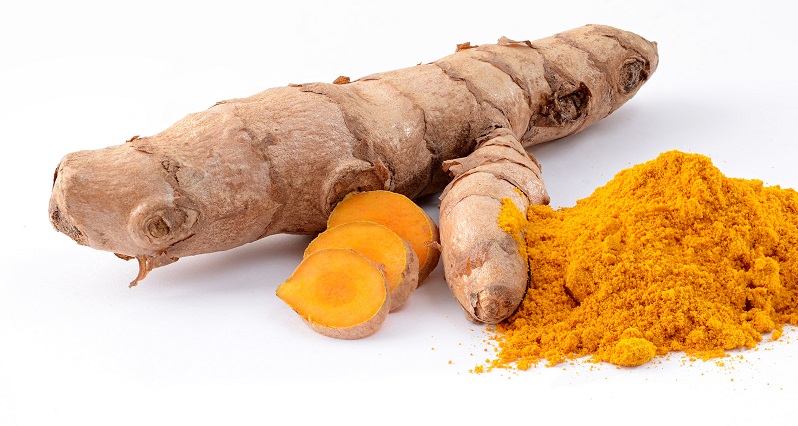 Turmeric root contains powerful anti-inflammatory compounds.  For culinary uses or general health, fresh or dried turmeric is fine.  But for medicinal purposes, concentrated extracts are the way to go.

I once had a Biochemistry professor who liked to give all his students a chart that his professor had given him, probably 50 years ago. This chart, he said, summed up everything. It showed all the things that can go wrong with the human body – all the acute and chronic diseases, the age-related degeneration the aches and pains, and injuries and deaths – all with arrows pointing to and from a single word at the center: “inflammation.”

For the most part, it’s true. There are thousands of ways we can be unwell. Almost all of them involve inflammation in some way.

So what is inflammation anyways?

Inflammation is the body’s first response to injury, infection, or a perceived threat. Chemicals released by damaged cells make the blood vessels dilate, bringing more blood into the region. Immune cells are attracted out into the surrounding tissue, to do battle, clear out debris, initiate repair, and quarantine. Meanwhile, normal metabolism and transit of nutrients take a back seat to these more urgent tasks.

Obviously, inflammation has its place. Problems arise, however, when it appears without a real threat (think allergies), or lasts too long (think arthritis). Then, instead of containing and resolving damage, inflammation begins to create damage. Chronic inflammation can perpetuate itself, setting up a vicious cycle of tissue damage and pain.

Especially insidious is hidden inflammation. When we sprain an ankle, the pain, heat, redness, swelling, and loss of function are obvious. But when our blood vessels, liver, colon, or brain become inflamed, it isn’t nearly so obvious until things are pretty far gone.

The most common test for hidden inflammation is for a marker called C-Reactive Protein (CRP). Unfortunately, CRP can’t distinguish between one type of inflammation vs. another. So high CRP might just mean a sprained ankle, or the flu. It’s when your CRP runs high, and stays high, that you’ve got a cause for concern. Many doctors will tell you that high CRP is a better predictor for future heart attack than even LDL (“bad cholesterol”) is.  And it may indicate other problems as well.

Omega-3 Fats: Omega-3s are a class of vitamin-like fats found in fish oil, krill, flax, hempseed, chia, walnuts, and free-range, free-feeding animal products. They are among the most health-promoting substances on the planet.

Omega-3s aren’t the best way to address acute inflammation. They work… They just take a week or two to start; sometimes a month or two to really kick in. But they’re an ideal approach to chronic inflammation.

Omega-3s don’t block inflammation, as much as they shift the balance away from it. They do this largely by displacing other, pro-inflammatory fats in the body[1].

Not all omega-3s are created equal. Long story short: the omega-3s found in animal foods (abbreviated EPA and DHA) are much easier for the body to use than those from plant foods. You can still shift the balance with nut and seed oils (and the omega-3 found there, abbreviated ALA), but if you really want to see a strong, therapeutic benefit, you’re going to want the EPA and DHA[2].

You actually can get vegetarian versions of EPA, although they tend to be expensive. They’re usually extracted from algae or specially grown yeasts. You can also use krill oil, where lower doses appear to be adequate. Take them with food.

Turmeric: Turmeric is one of the most broadly health-promoting spices on the planet. It promotes healthy fat metabolism, which in turn promotes the health of the heart, and of the liver. Turmeric is also a powerful antioxidant that protects the body from chemical and metabolic damage. There’s reason to believe it may protect against dementia. And turmeric is a reliable anti-inflammatory.

In our store, we sell more turmeric than any other herb. And not just because people “believe in it.” We sell it because people feel it. For joint pain (among other things) it really works.

But not all turmeric is created equal.

Turmeric, like all plants, is made up of thousands of compounds, some more relevant than others. Of particular interest here is a compound called curcumin. Curcumin is the most potent anti-inflammatory in turmeric, and one of the most researched phytochemicals in science.

But how concentrated? When we reach 95% of any one thing, it leaves only 5% for everything else. While these 95% extracts work great on inflammation, they leave behind some of turmeric’s other benefits. You can also find concentrates that run lower than 95% curcumin. They aren’t quite as efficient with inflammation, but maintain a full spectrum of side benefits. Here, I especially like the ones put out by the Gaia Herbs and New Chapter companies.

Finally, there’s the issue of enhanced turmeric. It seems everyone is marketing an “absorption enhanced,” “bioavailability optimized” version of the spice – and then claiming you “need” these for it to work at all. Long story short, you don’t. Having said that, a little black pepper extract will boost absorption slightly[4]. Here, I’d look at our Debra’s brand, which is good and reasonably priced. The Japanese Theracurmin™ product, marketed in North America by Natural Factors can boost absorption very significantly – but only becomes cost effective when you’re dosing aggressively.

A standard dose is 500 mg of the 95% extract, 3 times a day. Feel free to skip it on pain-free days. You may also exceed this dose on marathon days.

Boswellia, a.k.a. “Indian Frankincense” is another anti-inflammatory herb that works well on both its own, and makes a great complement to turmeric. Both turmeric and boswellia block inflammation. But boswellia does so from a different angle.

I’ve seen a few studies which have compared moderate doses of boswellia to a moderate dose of the mainstream pharmaceutical drug sulfasalazine in both Crohn’s disease and ulcerative colitis (both, types of inflammatory bowel disease). In all cases, the herb outperformed the drug.

A standard dose is 400 mg of boswellic acids, two or more times a day.

Combination formulas: While I write a lot about turmeric and boswellia, there are dozens of other herbs out there as well. I know a lot of people like to “keep it simple,” and just take one thing. But to my mind, the best interventions are combo formulas. Here, I’d pay special attention to the ones put out by Planetary Herbals (“Inflamma-Care”) and New Chapter (“Zyflamend.”)

Noni Juice and Reishi Mushroom are two solutions to chronic, autoimmune inflammation. Unlike pharmaceutical treatments for autoimmunity, neither one suppresses immune function. (They don’t really suppress inflammation either, at least not directly). They actually promote immune function by leading it in whichever direction will bring it closer to balance.
A lot of this has to do with a balance between Th1 and Th2 immunity. I won’t get into that here. But for true autoimmunity, either or both of these are worth a try.

Arnica is an herb that is often prepared as a homeopathic medicine. It is not an anti-inflammatory in the traditional sense of the word. What it can do – internally and topically – is help resolve acute inflammation more quickly. In particular, it helps clear excessive swelling and stagnation out of an area following a minor injury, so the real healing can take place. It’s of value both before and after an injury, but it really shines if you can pop a few pellets within 10-15 minutes. With the topical stuff, use it liberally, but keep it out of the eyes, and away from broken skin.

(These aren’t necessarily unhealthy foods, either. They’re just unhealthy for you).
So we see people with immune intolerance to wheat – whether they know it or not. They eat wheat, they get gut inflammation, and their arthritis gets worse. This usually doesn’t happen overnight, so it’s hard to connect cause and effect.

Every year, I speak with dozens of people who are shocked to discover how much their lives get better when they cut one, sometimes two, foods out of their diets. After decades of aches and pains, blues and blahs, so pervasive they didn’t even notice anymore… It’s worth exploring this issue – not with your doctor, not with your pharmacists, not with me – but through some trial and error. If you’re going to make the discovery, you may as well make it now, instead of a decade from now.

[1] Of course you should also eat less of these bad fats. Avoid fried and partially hydrogenated fats, but also generic “vegetable oil.”  Be especially careful around a fat called arachidonic acid, especially rich in poorly-raised meat. The shift from free-grazing animals to factory-farmed, soy- and corn-fed animals, is one of the biggest causal factors in our current epidemic of inflammation.

[2] And really, the EPA much more than the DHA.

[3] Cook the powder in oil for a while, like sautéing garlic. It will taste better, and absorb better. Then you can use that oil to make popcorn, fry eggs, cook a burger, or soften aromatic vegetables for a stew.