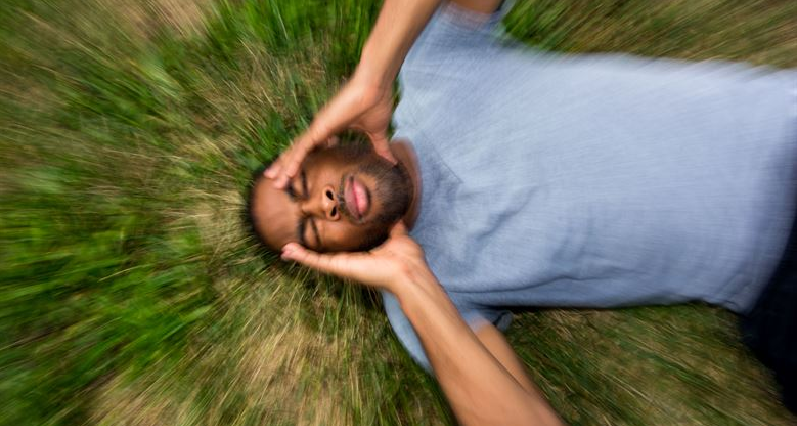 Potential concussions should be addressed quickly. Don’t wait. And DON’T go back into the game until you’ve been cleared!  U.S. Air Force photo/Staff Sgt. Jonathon Fowler

A concussion is a traumatic brain injury caused by a thwack to the head.  It’s usually a big thwack.  But it doesn’t have to be.  Even something as “benign” as an errant soccer ball can do it, if it hits you just wrong.

The impact and following inflammation disrupts neuronal membranes, cell contents “slosh over” into the surrounding tissue, and blood flow to the brain is reduced. Brain cells ramp up their metabolism to try and repair the damage, using up their (now, limited) fuel, leading to a suffocating build-up of metabolic wastes. All of which, combined with the heightened neuronal excitation, suffocates and fries brain cells.

Everything gets thrown out of kilter, and recovery can take weeks or months.

Even after full recovery, concussions, especially multiple concussions, increase our risk of developing dementia and mood disorders including depression as we get older.

So, what should you do when you think you may have gotten a concussion?

Well, if you think you might have a concussion, get checked out by a professional, quick.

Feeling confused, clumsy, and/or groggy? Have a headache or feeling nauseous? You might have a concussion.

Whatever you do, do not jump back into the game.

At the ER, they can rule out intracranial bleeding and any immediately life-threatening complications. They can make sure you’re stable. Then you can jump right into the natural medicine.

To be honest, there isn’t any “gold-standard” research on natural medicine and concussions.  This isn’t because natural medicine doesn’t work, as much as because concussions are hard to research. Nobody plans on having one. Nobody signs up for a clinical trial ahead of time. When people do show up for treatment, hospital emergency rooms are generally interested in stabilizing them and sending them home. Follow-up generally isn’t part of the picture. In other words, there’s really no gold-standard research on any sort of medicine reducing the severity or after-effects of a concussion.

Really, everybody ought to be taking a high quality fish oil. Everybody. All the time. Especially people who play contact sports. Yes, you can – and should – take high-dose omega-3s following a head trauma. But moderate-high doses daily are also important.

In 2011, two U.S. military doctors published a paper entitled “Neuroprotection for the Warrior: Dietary Supplementation With Omega-3 Fatty Acids” in the journal Military Medicine. This was a review paper, consolidating a large amount of published data, plus the authors’ clinical experience. Their conclusion: “3,000 mg daily should be considered for the athlete and soldier, not only for its general health benefits, but particularly for those at risk or high exposure to brain impacts.”[1]

To be clear, the authors aren’t advocating 3,000 mg of fish oil, but 3,000 mg of omega-3 fats from fish oil. In particular, they’re talking about the omega-3s abbreviated EPA and DHA. EPA reduces inflammation. DHA rebuilds damaged neuronal cell membranes. Both are important.

Following a head trauma, after you’ve ruled out intracranial bleeding, you’re going to want to use even larger doses.  The doses that I was originally taught were 9,000 mg omega-3s per day in the first week, 6,000 daily during the second week, and 3,000 daily thereon until symptoms resolve. (Or, ongoing for general health). Granted, these are doses for soldiers or large professional athletes (NFL and NHL). For an average size person, maybe cut them by a third…

Most of us know turmeric, the Indian curry spice. Curcumin is the primary active anti-inflammatory compound in turmeric, and the focus of most turmeric research.

While there’s plenty of research on curcumin in people, there isn’t any specific to traumatic brain injury. There is, however, a fair amount in rodents. Curcumin given both before and after acute brain injury reduced inflammation in the brain, and many other markers of brain trauma: cellular edema, reactive astrogliosis, membrane lipid peroxidation, and decreases in healthy protein levels in brain cells, all strongly suggesting a healing role in human concussion.

The rodent research seems to suggest there may be a limited window in which curcumin helps: before the injury, or for a just a few hours afterwards. Time is of the essence. Having said that, I certainly wouldn’t throw away my curcumin after the third or fourth hour…

Large doses may be desirable, as much as 8 g of curcumin for an average weight adult. Again speaking personally, I’d suggest a particular brand called Theracurmin. It appears to cross the blood-brain barrier more efficiently than others.

Going back more than a decade, there was tantalizing research on this one, where it seemed to increase nerve growth factor (an important brain-repair compound) in test tubes. In theory, this could mean recovery from concussions, strokes, peripheral neuropathy, even dementia.

Test tubes, however, are a long way removed from real life.

I’m throwing this one in the list not only because of that tantalizing research but because I’ve recently had a few people report it helped a lot in other neuropathy states – post-herpetic neuralgia, pinched nerves – implying that it does something in the body.

is often marketed as a sports supplement, a sort of “steroid, lite.” This does a tremendous disservice, both to the supplement itself, and anyone who might benefit from it. Yes, creatine will help weight-lifting. But no, it is not in any way a steroid (or hormonal at all). It is safe (unless you use it foolishly), and appropriate for teenagers.

Creatine works by helping to extend the stored energy capacity of cells. This includes muscle cells, of course, but also brain cells. There’s been some human research showing it helps the elderly respond better to sleep deprivation, and improves function in Parkinson’s and Huntington’s patients.

In the first few days and weeks following a concussion, when brain cells starve, creatine helps keep them alive. One study found that creatine administered before and after head trauma could reduce cortical injury by 36% in mice, and up to 50% in rats. Bioenergetics within the neurons was improved, while free calcium (a marker of unhealthy excitation) and oxidative stress were decreased.

Two small studies (both open label) in adolescents found that 0.4 g/kg creatine given within four hours of head injury, and daily thereafter, got them out of the hospital faster. Over a matter of months, they also did better on test of memory, cognition, mood, and coordination.

The great naturopathic doctor Bill Mitchell always recommended saffron tea for cerebral edema. He suggested steeping ten threads in hot water for a few minutes, and drinking twice a day. We do know that saffron is one of the most potent antioxidants to cross the blood-brain barrier, and a calming antidepressant.

Saffron may be the most expensive spice on Earth, ounce for ounce. But as Dr. Mitchell loved to point out, two cups a day still costs less than a latte.

[A word from Debra on Arnica: I was brought up on homeopathic medicine. Mom always said homeopathics were the safest and gentlest medicine. After any accident or injury, no matter what else, “Take arnica!” she would exclaim. Arnica is the remedy of choice for concussion. Blue Shield Complementary and Alternative Health notes that arnica can also help prevent shock.

Lifestrong.com says, “Arnica, recommended for sudden traumas, shocks or impacts, was originally chewed by Alpine mountain climbers to treat bruises and broken bones….Homeopaths use arnica to treat both concussion and post-concussion syndrome, which features headache, dizziness, amnesia and depression.”