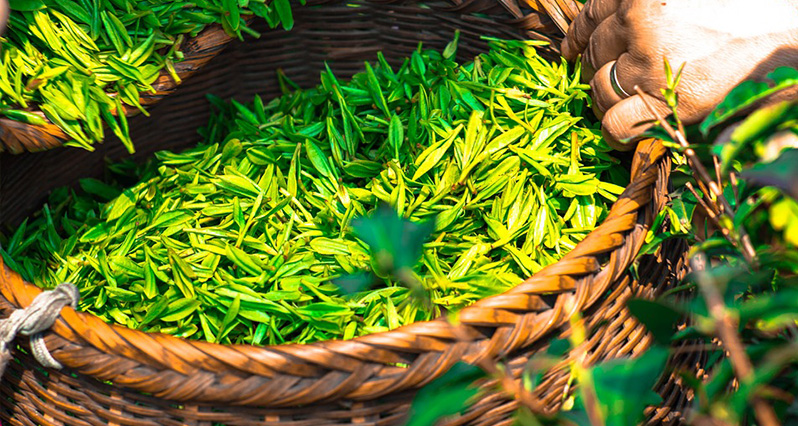 Theanine is an amino acid originally isolated from green tea. It has well-researched calming and focus-enhancing properties.

L-theanine has been a “big deal” in the natural health world for a number of years now, as a nutraceutical “chill pill” that calms you down without making you drowsy.  It helps you relax, but leaves you alert. Unlike a lot of pharmaceutical calmatives, it also appears to help learning, and protects the brain.

Despite all that, I never wanted to write about theanine until recently. I just wasn’t ready to jump on the bandwagon of yet another new thing, largely because I already had my herbs, and I trusted my herbs. And why would I want to mess around with this newfangled nutrient if my herbs already worked?

Well, it’s time to jump on the bandwagon. For one, theanine really does work, quite well in fact… Not only do I hear it from customers and other healthcare practitioners, but every few months, it seems, there’s another clinical trial.

And it has side benefits, as you’ll read below.

Theanine is quite safe.

Theanine also tastes alright, so even if you can’t swallow pills, it’s easy to take. There is chewable theanine, which is easy to take, and appropriate for adults and children alike. There’s even a beverage called Zenify, which is sort of a theanine soda. I don’t see anyone grimacing when they drink it!

So what is l-theanine anyways?

L-theanine is an amino acid found naturally in tea. In supplement form, you can get theanine both extracted from tea (more expensive), or produced via “fermentation” (in other words, bacteria make it). By far the best-researched theanine is produced by fermentation, the Suntheanine brand out of Japan.

And what does it do, exactly?

A lot! Most of it will be covered below. But what most interests me is how it can calm you down — without sedating you. In fact, while many calmatives function as depressants in one way or the other, theanine does not. It doesn’t work by damping down your mental activity. It appears to steer mental energy in a direction that is focused and relaxed.

And how much l-theanine should I take?

Enough so it works for you! Theanine doesn’t need to build up in the system – you’ll feel it quickly enough, and be able to adjust your dose accordingly. I’ve seen research out of Holland showing at least a slight effect at 50 mg (PMID: 18296328). However, I’d suggest starting at 100 mg (still a low dose), and taking it from there. I think it really starts to kick in at 200 mg, taken as needed throughout the day. The Zenify beverage has 300 mg per can, plus other ingredients.

On the high end, a friend of mine with panic attacks was advised to take 800 mg 3 times a day. I’m not sure if I feel comfortable suggesting a dose that high. However, my friend said he felt wonderful.

So… I already drink tea? How much theanine am I getting?

Every cup of tea is different. It depends on the quality of the tea, how much you use, how long you steep it, etc. I’ve seen numbers ranging anywhere from 5 mg per cup to almost 50 mg for very high-grade green tea like matcha.

My feeling is that for the medicinal or therapeutic effects of theanine, you’re going to want to look to supplements. However, for some of the more long-term protective effects, drinking tea daily is just fine. Besides, tea contains all sorts of other good stuff, too.

So, is it okay to take caffeine and theanine together? Is it good?

Sure it’s okay – you do it every time you enjoy a cup of tea!

Is it good? Yes, in some situations, absolutely. Caffeine + theanine is a wonderful combination for alertness, especially when you’re multitasking. In fact, most of the really impressive research on memory and attention has involved this combination. The combination seems to be especially valuable both in maintaining steady focus, as well as switching our attention from one task to another smoothly (PMID: 20079786). The caffeine makes you alert, and the theanine sort of buffers the jittery-making effects of the caffeine.

It should be noted, however, that most of the research has not involved the naturally occurring ratio of caffeine and theanine in tea (i.e. more caffeine than theanine), but a deliberate combination with more theanine than caffeine.

Either way, theanine is a great way to enjoy the positive effects of caffeine, while making the negative effects less intense.

Of course if you’re looking at theanine purely for relaxation or even sleep, the caffeine won’t help.

Is it safe to take with medications?

In one study, theanine was also safe immediately before and after surgery, with anesthesia (PMID: 22972879). In fact, it improved the outcome of the surgery.

And is it safe for children?

I’m not sure if there’s a cut-off somewhere – 5 years old? 3 years old? Although I cannot think of a concrete reason it wouldn’t be appropriate for young children. There is, however, at least one good clinical trial where it was given to 8-year-olds (PMID: 22214254).

In another study, infant rats (still nursing) were provided theanine by feeding theanine-enriched water to their mothers. This seemed to help them better form memories after birth (PMID: 21604187).

But what, precisely, does it do?

Theanine does a lot. To my mind, the biggest thing is it helps you relax.

What else can theanine do? Help kids with ADHD sleep.

One of the big issues with ADHD is impaired sleep, especially if the kids are also taking stimulant medications like Ritalin.

In one study, 96 boys ages 8-12 with ADHD were given either chewable theanine (200 mg, twice daily) or placebo for six weeks. At the end of the six weeks, the kids who got the theanine were getting better quality sleep, and waking up less often. It wasn’t a huge difference, but it was enough to be noted by the researchers.

It’s interesting that in this study, the kids were getting one serving of theanine in the morning, and another after school. They were not taking any right before bed. I imagine the results would have been even better if they’d switched this around a bit…

The research here mostly involves rats and mice. But it’s pretty consistent. When you get a mouse or a rat stressed, it doesn’t remember things too well. But when you give them theanine ahead of time, they remember things better ( PMID: 23458739, PMID: 23395732).

In one study out of Tel Aviv, 60 patients with schizophrenia or schizoaffective disorder were given either 400 mg theanine or placebo daily for 8 weeks. There are two general classes of symptoms in these patients. Excited, high-energy symptoms were reduced in the patients receiving theanine. However, sluggish, low energy symptoms did not improve. PMID: 21208586. Further analysis showed that the patients on the theanine had lower levels of stress hormones, and higher levels of a hormone in the brain which protect brain cells from damage (PMID: 21617527).

It should be noted that patients continued taking antipsychotic medications along with the theanine.

Protect the Brain from Aging and injury:

The strongest evidence surrounds what’s called ischemia-reperfusion injury to the brain – basically, where blood flow is cut off, then later rushes back in. This is a lot like a stroke (but doesn’t imply that you can fix a stroke that’s already occurred). The weakest, but most exciting, evidence so far, points to brain anti-aging.

In one study, mice were given way too much alcohol for their own good. Half the mice were given a protective dose of theanine beforehand; the others were not. Afterwards, the mice given the theanine had stronger livers, with greater detoxification capacity. Fatty liver (steatosis), a serious problem with chronic drinkers, was also reduced (PMID: 22019691).

In one study with mice (PMID: 23233221), l-theanine inhibited the activation of the reward circuitry in the brain that normally lights up in response to nicotine. It also reduced the number of brain cells that could respond to nicotine. Mice that were given theanine were less likely to go out of their way to get their “fix.”

This is of course a long way’s away from actually proving that theanine will help you quit. But I’d give it a try. If it works on people like it works on mice, great! And if it doesn’t, it will still help you relax.

There was also an interesting study out of Beijing, where smokers were given filter cigarettes with l-theanine infused in the filter. This wasn’t a controlled trial, but still… By the end of 2 months, they were smoking an average of 51% fewer cigarettes, and almost a third of them had quit smoking entirely!

In at least one study with rhesus monkeys, theanine reduced withdrawal symptoms significantly.

Maybe help you quit eating as much?

In one small study (small, even by rat study standards), theanine kept the rats from eating quite so much (PMID: 18460793). For this, however, I’d suggest green tea vs. plain theanine, as there are other compounds in green tea that will also support healthy weight.

In one study, 200 mg theanine was given to healthy adults (PMID: 23107346) for seven days, and then they were given stressful tasks that were supposed to raise their blood pressure. Some of the stressors were psychological (puzzles, mostly), while others were physical (keeping your hand in ice-cold water). Theanine not only helped people relax, but it also kept their blood pressure from spiking as much — at least for the psychological stress.