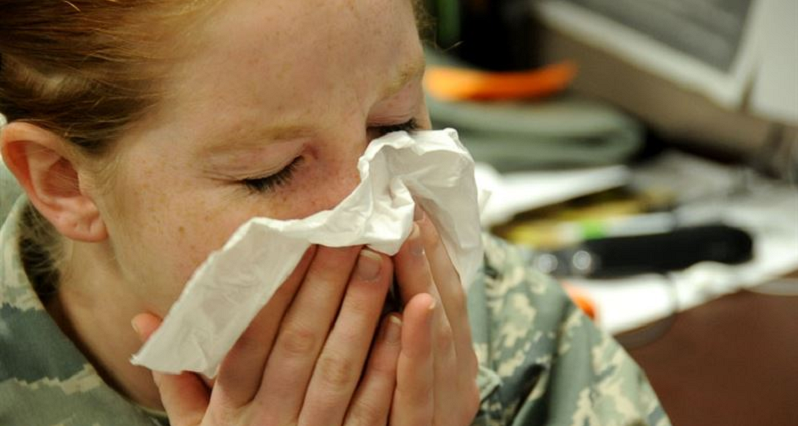 When I first sat down to write this, I was just going to talk about my 5-point herbal wellness plan, and how important it is now with the flu vaccine shortage. But then I figured I ought to write about stress… which meant writing about adaptogens… then a couple of paragraphs for antibiotics… By the time I was done with all that, I didn’t have any room left for the immune-boosting herbs!  So that will be next month (and if you can’t wait, we will have copies to hand out in November, as well as Debra’s classic “Seated Next to Typhoid Mary?” handout).

Most of us know when we might get sick.

For example, if you just spent the last two hours next to someone coughing and sneezing. Or if you get caught outside in the November rain and come home soaked to the bone and shivering. Ditto if you’ve been feeling stressed, overworked, overtired, or generally run-down.

We always talk about taking herbs “when you’re fighting something off,” and how important it is to take them early – at the first sneeze, the first tickle of a sore throat. But we shouldn’t wait even that long! The first step to staying well this winter is to identify the times you’re at risk, and then act accordingly. A good 2 or 3 capsules taken when you might be fighting something off is truly the proverbial ounce of prevention.

Before we get into treatments for cold and flu, it’s worth taking a closer look at stress. When most of us talk about “stress,” we think of the emotional stress of feeling overworked and overwhelmed, which leads to changes in the body such as raised blood pressure, sleep disturbances, sexual dysfunction, weight gain, and of course lowered immunity to infection. These changes are part of what is called the stress response.

But there’s another side to stress, physical stress, which evokes the stress response just as strongly as the emotional stuff. For example, being cold evokes the stress response, as does being hot, crash dieting and skipping meals, sleep deprivation, loud noise, pain, and too much exercise. The point is, all these different types of stress add up: letting yourself get cold and hungry while you’re already feeling overwhelmed by life is adding fuel to the fire. So even if we can’t control all the stressful details of our lives, we can at least make sure we eat well, get to bed on time, and stay bundled up against the cold – especially when the emotional stress is already adding up.

Adaptogens can do this because they don’t target the stressor (i.e. the cold, the low blood sugar, the emotions, etc.). Instead, they target the stress response1, which is nearly identical no matter what the cause! Some of the most revered tonic herbs from around the globe are adaptogens, herbs like Asian ginseng (Panax ginseng), American ginseng (Panax quinquefolium), Eleuthero and Rhodiola from Siberia (Eleutherococcus senticosus & Rhodiola rosea), and Ashwaganda from India (Withania somnifera). None of them are immune herbs, strictly speaking. But they will all help keep your immune system up and running if stress is what’s bringing it down.

Which adaptogen is right for you? Well, this may be a huge oversimplification, but I think of Rhodiola for short-term intense mental stress; Ashwaganda for hyperactive, anxious stress, especially with insomnia; Asian ginseng for cold, congested, lethargic stress; and Eleuthero root as an all-purpose tonic for generally fit individuals. Research also shows that fish oils can keep our immune systems from being so depleted by stress, including the stress of major surgery. Just goes to show (and I say this everything month) fish oils are good for everything!

Antibiotics: the good, the bad, and the unecessary

Let me say right off the bat, I think antibiotic drugs are great! When it comes to systemic bacterial infections, no other therapy is as tried-and-true as the antibiotics your doctor can prescribe. However, it is important to note (and I’m going to put this in all capital letters for emphasis): COLDS AND FLUS ARE NOT CAUSED BY BACTERIA; THEY ARE CAUSED BY VIRUSES. ANTIBIOTICS DO NOT KILL VIRUSES. 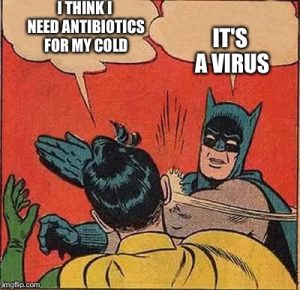 Ask yourself: what would Batman do?

Your doctor might still prescribe antibiotics for a winter infection if he or she fears that it’s something more serious like strep throat. Mostly, however, doctors prescribe antibiotics for colds and flues to placate patients who expect their doctors to give them something.3 This is a major problem. Not only do unnecessary prescriptions drive up skyrocketing healthcare costs, but overuse of antibiotics specifically carries serious health risks. The more we use antibiotics, the greater our chance of developing antibiotic-resistant bacteria, which may become difficult or impossible to treat. Beyond that, there is the very real link between antibiotics and cancer.

When the study’s authors had a chance to explain their findings, they did not suggest that antibiotics were inherently carcinogenic; instead they proposed that the increased cancer risk was due to probiotic die-off. You see, antibiotics are such powerful drugs, they kill all sorts of bacteria, including the “friendly” probiotic bacteria which live in our guts, where they help us digest food, absorb nutrients, control pathogenic yeast, keep the immune system up and running, and play a major role in reducing our risk of cancer.

What the study’s authors did not mention is that probiotics are available in pill form, to replace the friendly bacteria after they’ve been killed off by antibiotics. A strong course of probiotics should be considered an essential follow-up to every course of antibiotics.

3 A study, published in the April 1999 issue of Pediatrics, showed exactly how much of an impact these expectations can have. In this study, involving children with common viral infections, doctors prescribed antibiotics 62% of the time when they thought that parents expected an antibiotic, versus only 7% of the time when the doctors felt the parents did not. Furthermore, they were more than twice as likely to diagnose the disease as bacterial when they thought the parents expected antibiotics! It’s especially interesting to note that what doctors thought the parents wanted had no relation to what the parents actually did want…