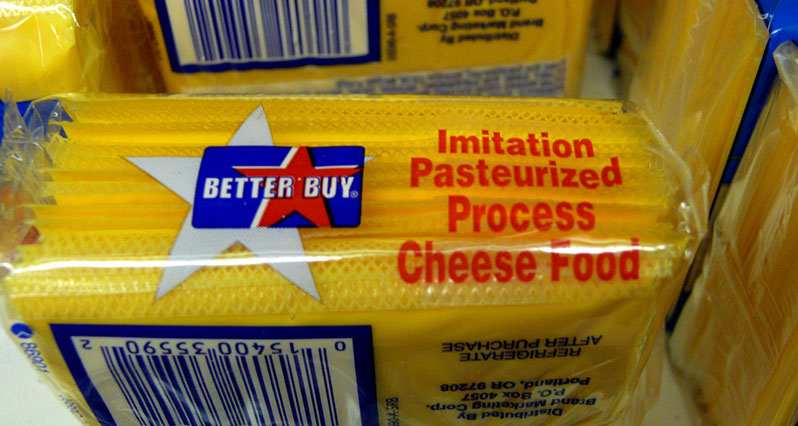 I’m not completely opposed to junk food.  For example, the occasional leftover French fry scavenged from the plate of a dining companion, or the deep fat-fried Snickers-bar-on-a-stick at Redbone’s in Davis Square, Somerville.  Those, I feel, are worth it.

But for the most part, I just wonder why.  I mean, really, why eat most of the crap that’s out there?  Having been raised on good food, I’m constantly amazed that people would crave, say, a Fenway Frank over the much-more-delicious Coleman organic hot dog.  Or a white-flour-Crisco-crusted corn-syrup Cool Whip pie, over something with whole grains and actual fruit and soaring peaks of whipped cream.  For the most part, natural which is to say: “real” just tastes better.

Nowhere is this truer than when it comes to cheese.  I love cheese.  I respect cheese.  I write love sonnets to cheese, in all its cheesy beauty.  So you can imagine how shocked and offended I was when, for the first time in my more than 30 years, my taste buds experienced the day-glo dairy mucous extrusion that’s splotched over lukewarm tortilla chips & called “nachos” at a movie theater.

What is this industrial waste?

That’s not a rhetorical question!  What, exactly is nacho spread made of?  To answer that question, here’s an excerpt from the U.S. Code of Federal Regulations, Title 21: Food and Drugs.

…down a few more paragraphs, the code gets multisyllabic for us…

I could go on.  And on.  But you get the point.  Do we really want to eat a food that requires three pages just to define?  Anyone interested in reading the rest of the three-page definition of “Pasteurized process cheese spread” can find it on-line at http://ecfr.gpoaccess.gov.

And while you’re at it, you could probably find “hot dog” on there as well.  But, really, why give yourself nightmares?