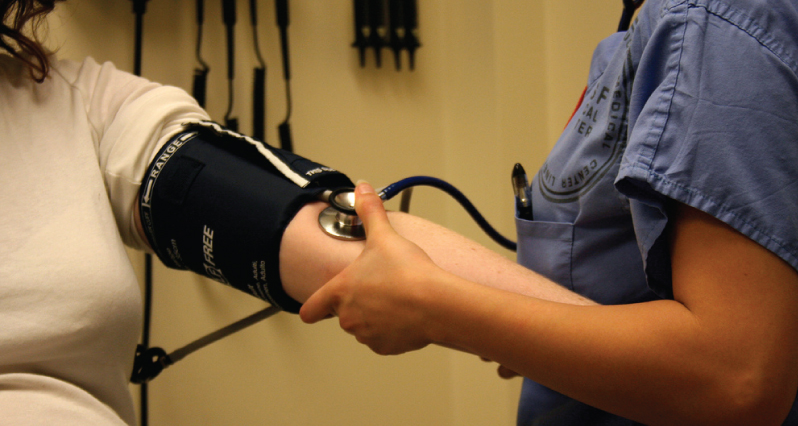 The higher our blood pressure, the harder the heart has to work.  Over time, this enlarges the heart, which is not a good thing.  Chronic high blood pressure hardens the arteries and increases our risk of heart attack, aneurysm, and stroke.  The kidneys, which filter the blood, can also be damaged.  The risk of glaucoma is increased.

Simply put, hypertension is one of our biggest risk factors for serious disease, period.

Blood pressure readings are given as [number]/[number].  (Please understand this is not a fraction, but two separate numbers!)  The top number, called systolic blood pressure, is the maximum pressure, when the heart muscle is in the middle of a contraction.  The lower, or diastolic, number is the pressure between beats.  While both numbers are important, diastolic pressure is a bigger risk factor for disease

The current definitions[1] are as follows:

These numbers can skyrocket temporarily, especially when we’re feeling anxious or stressed.  Since many people feel anxious and stressed in a doctor’s office, blood pressure readings taken there don’t always paint an accurate picture!  Caffeine and other stimulants will also raise blood pressure.

What to do – lifestyle:

Let me just rattle these off.  Stay physically active, maintain a healthy weight, don’t smoke, and control stress.  Simple enough, no?  Well, this all can be remarkably effective.

First, here’s what not to eat (although just about everything is fine in moderation): coffee, salt, sugar, and trans-fats.  Alcohol, especially red wine, appears to be beneficial in moderation (i.e. 1-2 glasses an evening); more than that, however, can be detrimental.

On the other hand, here’s what you do want to eat: fresh vegetables and fruits, fatty fish, whole grains, nuts and seeds.  In short, anything rich in fiber, antioxidants, essential fatty acids, magnesium and/or potassium.  There are some foods, however, which deserve to be especially spotlighted.  Here’s a top-7 list, in no particular order.

#1 Celery: Celery contains a compound called 3-n-butyl phthalide, which has been shown to lower blood pressure in animals.  Honestly, there’s no research out there with people.  Still, there are reports of people having sometimes astounding results with celery, often within a week or two.  The suggested amount?  Four ribs a day.

#2 Coconut Juice (a.k.a. “coconut water”): this is the juice from inside a coconut, as opposed to coconut “milk.”  Even if you’re worried about “dangerous” coconut oil (but you shouldn’t be), you won’t need to worry about this delicious, fat-free, low-cal beverage.  Coconut juice is on this list for one reason only: it is extraordinarily rich in potassium, providing nearly 1,000 mg per pint.  More about potassium later.

#3 Red Wine: over the long, long term, any dark, richly-colored fruit will support the elasticity of blood vessels.  Blueberries, pomegranate, hawthorn berries, dark cherries, and goji are all winners here.  But red wine has an additional advantage, namely the alcohol content.  Don’t get me wrong.  If you drink too much, you will raise your blood pressure, sometimes for days.  But 1-2 glasses an evening can be just enough to relax high-strung, stressed-out individuals at the end of a long day.

#4 Garlic: Garlic lowers blood pressure, pure and simple, although it’s relatively mild in its effect.  So while you can take it in pill form, frankly, there are other pills stronger and more effective.  But work 2-3 cloves of garlic into your dinner to give yourself at least a little boost.  Plus garlic helps the liver, lowers cholesterol, and fights viruses to boot.  Onions are good, too.  Worried about garlic breath?  Talk to Debra about liquid chlorophyll!

#5 Stevia: there have now been two large, good clinical trials that have shown this sweet herb to lower blood pressure in people.   In the largest trial, 174 people took either 500 mg of a concentrated stevia extract or placebo three times a day.  Those taking stevia saw their systolic and diastolic readings drop by 10 and 6 points, respectively, with benefits beginning after a few months.  All told, this was a two-year trial.   It might be more effective to use Stevia in the diet rather than pill form, because it could replace sugar and other unhealthy sweeteners.

#6 Sesame Seeds and Sesame Oil: for about a dozen reasons that involve complicated biochemistry that I’m not going to get into here, sesame seeds are just about the healthiest food on earth, really and truly.  In terms of blood pressure, there have been quite a few rat studies showing sesame to be helpful, and then one human trial.  In this trial, 530 patients with hypertension were given a standard drug, and then either sesame oil, sunflower oil, or peanut oil (or nothing) and told to use that as their only cooking oil for two months.  In the end, the people using the sesame oil had lower blood pressure, better cholesterol levels, and about a half-dozen other heart-healthy blood markers to boot!

#7 Plenty of Fluids, especially water and herbal teas – and especially in people who are especially sensitive to sodium.  (Come in and check out our stevia lemonade recipe, which uses Hibiscus as well!)

So beyond the foods and the exercise and the relaxation, what else can we do about hypertension?  I touched briefly on sodium and potassium earlier, but now I’d like to go into it a little more deeply now.

Simply put, salt attracts water.  So when you have plenty of salt in your bloodstream, it holds water in, raising pressure.  One solution here is to drink more water.  This extra water is needed to flush the sodium from your system.

There’s also the issue of maintaining the balance between sodium and potassium and most of us have way too much sodium.  Sodium and potassium participate in some of the most basic functions of the cell, but they do so from opposite sides, so to speak.  So although we tend to focus on limiting sodium intake, it’s the sodium:potassium ratio that matters for most people.

In fact, a number of studies have found that limiting sodium alone doesn’t lower blood pressure in many people unless potassium intake is upped simultaneously.  The Encyclopedia of Nutritional Supplements has a wonderful page which lists foods, not just by amount of sodium or potassium, but by their sodium:potassium ratio, and this is worth studying.  That being said, it’s a good generalization to say that almost all fruits and vegetables (especially avocadoes, coconut, lima beans, tomatoes, potatoes, and bananas) have the desired higher level of potassium.

The U.S. government does not allow more than 99 mg of potassium to be added to a serving of a supplement, so if you want higher-dose potassium pills, you’ll need to get a prescription.  But look at many common salt substitutes, which are made from potassium chloride instead of sodium chloride.  A teaspoon generally provides 1200-1300 mg, more potassium than 3-4 whole bananas.

Discuss high-dose potassium with your doctor if you have severe kidney or heart disease, and with your pharmacist if you’re taking any medications.

This is another often-overlooked mineral, and not just in terms of hypertension.  Low magnesium can also be a major factor in everything from asthma to heart disease, osteoporosis, kidney stones, migraines, and PMS.  Magnesium does a number of things, but one of its biggest roles is in maintaining the balance between sodium and potassium.

To be fair, the research on magnesium and blood pressure has been mixed, with some large, well-designed studies showing a major effect and others not so much.  Michael Murray and Joseph Pizzorno have the following to say in The Encyclopedia of Natural Medicine:

Rather than performing a blood test to measure renin or intracellular potassium and sodium, we recommend giving magnesium a four-week trial.  We also recommend consuming a high-potassium diet or having your doctor prescribe a potassium supplement.

Like potassium, people shouldn’t take much magnesium if they have severe kidney or heart disease.  Other than that, the only major caution is that magnesium can cause loose stools when it’s poorly absorbed.  Obviously, it’s worth avoiding the poorer-absorbing forms of magnesium such as magnesium sulfate, hydroxide, chloride, and oxide.  400-600 mg a day of magnesium is a good dose.

[1]There is now a push to modify these definitions, as the American Society of Hypertension recently began suggesting that doctors prescribe blood pressure-lowering medications even to some people who are currently classified as only pre-hypertensive.  This move, however, appears to be fueled less by research and more by the $775,000 given to the Society by pharmaceutical giants Merck, Novartis, and Sankyo – all of which stand to make an enormous profit if even a fraction of the 59 million Americans currently considered pre-hypertensive were put on drugs.  Most of the money was spent on a series of dinner lectures to proselytize to doctors.  These dinners took place at a national steakhouse chain, incidentally.

The New York Times writes: “If the American Society for Hypertension hoped to devise an expanded definition of the condition that would be scientifically and ethically defensible, it sure picked the wrong way to do it. Virtually every step in its efforts to redefine hypertension from mere high blood pressure to a broader syndrome has been financed by pharmaceutical companies that would gain by selling drugs to more people.”