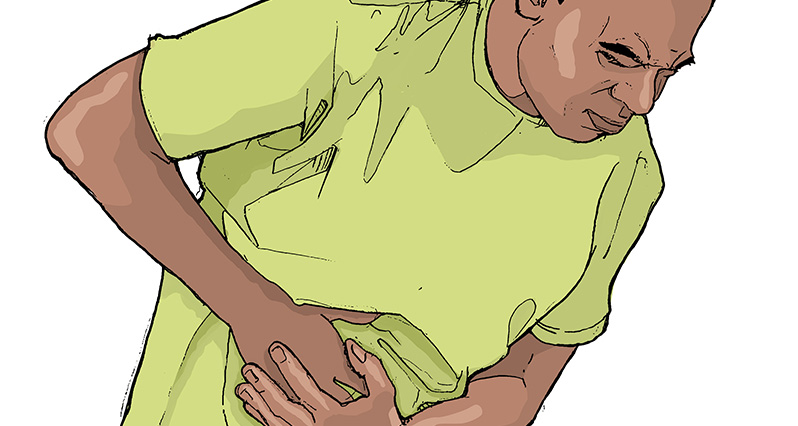 Irritable Bowel Syndrome is tricky.  Basically, you show up at the doctor’s office with lower GI symptoms – alternating constipation and/or diarrhea, gas and bloating perhaps, maybe bowel pain and cramping that goes away when you have a bowel movement – and when the doctor can’t diagnose anything else wrong with you, it gets called IBS.

IBS is a not a structural disorder, but a functional one.  There’s nothing physically wrong with your gut – nothing injured, eroded, or inflamed – it’s just acting wrong.  All of which makes IBS hard, not just to diagnose, but also to treat, since there’s nothing physical you can go in and actually heal.

IBS is hard to treat, too, because the symptoms can be erratic.  Most people with constipation can just take some laxatives until things get better.  But if you take a laxative with IBS constipation, you never know when it’ll switch over to diarrhea…not a good idea!

There are, however, ways to manage IBS (a few follow).  You might have to experiment with them because IBS can be very different in different people.

Diet: Some people find it helps to avoid foods which make them gassy.  Others find they need to stay off dairy, or wheat.  Still others find that small meals are key.  Some people find raw vegetables are a real killer.  And of course there are people for whom food choice doesn’t seem to make a difference at all.  Remember, just experiment.

(Oh, and a side effect of stress reduction?  You feel less stressed).

Antidepressants and Anti-Anxiety Agents: While results with pharmacologic interventions have been mixed, lifestyle-based stress reduction shows pretty consistent benefit.  My advice: if you’re feeling stressed or depressed, perhaps address it with herbs or pharmaceuticals for the sake of the stress and depression.  If your IBS gets better, too, well then: bonus. But it wouldn’t by my first choice to address the IBS directly.

Peppermint Oil: Peppermint oil relaxes spasming smooth muscle on contact, including muscles spasming along the gut.  It’s really as simple as that.  You’re not trying to absorb the peppermint into your system, or metabolize it.  You simply want it to touch your gut walls.

Depending on how fast things are moving through you, it can take a day or two for enteric-coated peppermint oil capsules to start working.  The standard dose is 0.2-1 ml daily, in divided doses.

In a healthy gut, a robust gut lining maintains conditions which promote the growth of “friendly” probiotic bacteria.  These friendly bacteria in turn help stabilize the health of the gut.  It’s very much a symbiotic relationship.  (And it extends far past the gut: friendly bacteria regulate our immune systems.  They help digest food, and assist in detoxification.  They displace other, less “friendly” species.  They reduce the risk of cancer and liver disease).

Microbial populations in the gut are constantly shifting.  Eat lots of dairy?  Dairy-digesting bacteria will dominate.  Eat lots of fiber?  Bacteria that process fiber rise.  Eat lots of sugar, and yeast species like candida begin to take over.  Take antibiotics that decimate bacterial flora, and the yeasts have nothing to hold them back.  Let inflammation take hold, and the ensuing erosion of the gut wall makes it harder for healthy bacteria to hold on.

Which brings us to the research… There’s been an awful lot of it.  Some of it quite positive.  Some of it, not so much.  Most of it is maddeningly inconclusive.  In fact, there have been quite a few scientific papers in the last few years focusing just on the fact that the research is so confusing right now.  Different studies use different doses, of different strains, with different timing, in different people, with different symptoms.

So let me sidestep a lengthy and tiring analysis, and make a suggestion.  Get your hands on a good probiotic, with decent selection of Lactobacillus and Bifidobacterium species.  Shoot for a dose of 30 billion live bacteria, minimum, daily.  See what happens.  People often see benefits in a week or less for diarrhea symptoms.  It may take up to two months for the benefits to establish themselves in constipation.

There are a lot of people who find that it really, really helps.

Fiber: Fiber has a normalizing effect on bowel movements, since it can firm up loose stools, and help ease stubborn ones along.  That being said, some sources of fiber (insoluble fiber) can be rough and abrasive (sort of “scratchy”) to a sensitive gut.  These include wheat bran, psyllium, and raw vegetables.   On the other hand, soluble fibers (the kind that fully dissolve in water) are usually a safe bet.  So think gums and pectins, most fruit, oatmeal, and chia seeds.

Some fibers are also classifiable as “prebiotics,” which is to say they feed the probiotic bacteria in our gut.  Of these, Acacia fiber from the Acacia tree stands out as a great supplement for IBS.  It’s soluble, prebiotic, relatively inexpensive, and easy to take.  It makes a difference for people.

The person most responsible for Acacia’s popularity these days is a woman named Heather Von Vorous, manufacturer of the Heather’s Tummy Care line of products, and webmaster at www.HelpForIbs.com.  As I’ve run out of space, and since Heather is such a wonderful writer herself, I’ll just direct you to her (I normally wouldn’t send you to a corporate website, trying to sell a product, but Heather is great).  http://www.helpforibs.com/shop/suplmts/acacia_sale.asp