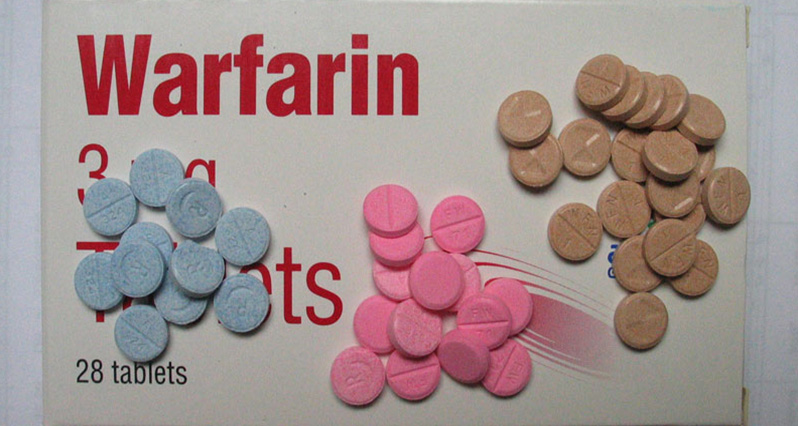 Warfarin is the generic name for Coumadin(Tm), a common anti-clotting drug. Patients are often told they need to avoid vitamin K when they’re on Coumadin. But that turns out to be bad advice.

Probably the number one safety concern I hear from customers is the one where you’re supposed to strictly avoid vitamin K – and especially supplements containing vitamin K – if you’re also taking the drug Warfarin (Coumadin). As with many misunderstandings, there’s a kernel of truth here. But it’s still a misunderstanding! Not only is it okay to get a little vitamin K every day from a multivitamin or other supplement, it actually helps the Warfarin work better.

Vitamin K, among the many things it does, helps blood to clot.[1] Warfarin, on the other hand, interferes with vitamin K with the intention of keeping blood from clotting. So, at first glance, it certainly looks like a bad idea to combine the two!

Managing blood clotting is a delicate balancing act. If you clot too easily, clots might form when and where they’re not needed. If these clots get loose, they can travel through the blood vessels and then get stuck again where they block blood supply to an important organ like the brain or even the heart. This can cause a stroke.

On the other hand, if you don’t clot easily enough, you run the risk of dangerous bleeding when you’re cut, or get bruised, or spring any of the microscopic internal leaks that are part of everyday life.

Coumadin is given to people who clot too easily. Yes, it can be a life-saving drug. But it’s also a drug with a very narrow therapeutic range: too little won’t work, and too much can hurt you. And everyone needs a different dose. Often it takes a number of visits back to the clinic to calibrate the dose “just right.”

All of which seems to imply that vitamin K would be very dangerous if it interferes with this drug that can save your life. So why am I still recommending it?

Vitamin K does a whole lot of really good things for us. And when we take Warfarin, we’re not just blocking its action in the blood. We’re also blocking its action in the bones, where it makes bones more resilient – there’s been a lot of very good research here. We block its actions in the kidneys, where it prevents kidney stones. We block its actions in the blood vessels, where it normally helps keep the vessels walls smooth and supple, preventing, among other things, the bad kind of clots. (Yes, you heard me right. Vitamin K can prevent clots.)

Perhaps the simplest way to get a consistent intake of vitamin K is to consistently just avoid it like the plague. You might be able to pull it off, too, if you try hard enough. And eat unhealthily enough. All you have to do is avoid all the leafy green vegetables. Then avoid all the other vegetables, too. Lose the green tea, lose the olives. Basically, if it’s green (and it isn’t made specially for St. Patrick’s Day), it has vitamin K in it. Fruits have some vitamin K. Vegetable oil has some vitamin K, too.

Even if you could, you wouldn’t want to!

And most people can’t. Maybe the chicken comes with a parsley rub. Or the pizza has olives on it. Even a Big Mac is going to have that lettuce… Etc.

It’s a poorly-kept secret how many people’s clotting times fluctuate on Coumadin.

But, if you start with higher baseline K levels, it smooths over these daily and hourly fluctuations.

Vitamin K levels in the blood are measured in nanograms per milliliter (ng/ml), with a normal adult range for adults of 0.13-1.19. Now let’s say, just for the sake of discussion, a nice side of roasted asparagus will bump your vitamin K levels up by 0.8 ng/ml. If you start with a level of 0.2 ng/ml, that asparagus will bump you up to 1.0 ng/ml. That’s 400% increase. But let’s say you start with a level of 1.0 ng/ml because you take a daily vitamin K supplement. If you add 0.8 ng/ml to that, you only see an 80% increase.

So, taking a regular daily dose of vitamin K can prevent large fluctuations in Warfarin efficacy. This isn’t just theory. There’s good research as well, showing a benefit both for people whose clotting times were irregular and inconsistent on Warfarin [PMID: 17666020, PMID: 17110451] and for people who were already responding well to the drug [PMID: 21193422].

There’s a lot more research out there if you look for it. The doses used tend to range between 100 and 200 mcg a day.

Of course if you up your vitamin K intake, you’ll need to have your clotting time checked, and your dose of Warfarin calibrated appropriately. You don’t do this yourself. You have to work with a physician or a nurse practitioner. Or, depending who’s licensed to do what in your state, a naturopathic doctor of physician’s assistant.

[1] Just to clarify, vitamin K doesn’t make blood clot, it simply helps blood clot.  In other words, you need enough vitamin K so your blood will clot appropriately, but piling on more and more vitamin K in an otherwise healthy person should not make you clot more than is healthy.  In one toxicology study in Japan, people were given 90 mg of vitamin K a day, just to see if anything bad would happen.  That’s 112,500 percent of the United States daily value.  No clotting abnormalities were found.