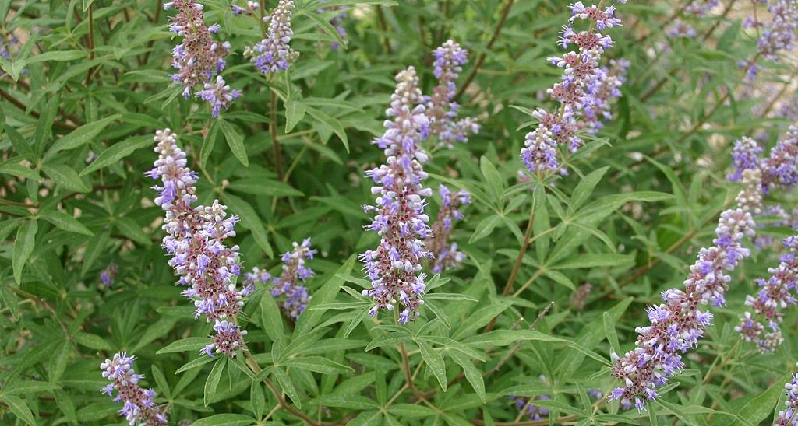 Chaste Tree (Vitex plant) isn’t a tree at all. And it has very little to do with chastity, despite the name.  The berries are a powerful herbal ally for hormone balancing.  Photo courtesy Sten Porse via Wikimedia.

If you have PMS or menstrual symptoms, you’re not alone. More than half of all women experience mood swings, anxiety, bloating, headache, acne, cramps, etc. Luckily, we can do something about it.

Your first line of defense is EXERCISE. Study after study shows that women who exercise regularly do better with every single symptom of PMS. Any exercise is good, but here getting your heart rate up is more important than weight training; frequency of exercise, more important than intensity.

Secondly, CLEAN UP YOUR DIET. Seek out fresh, organic plant foods rich in fiber. Make your grains whole grains. Try to eat legumes at least once a day. Throw nuts and seeds into the mix, as well as fermented foods (“Ahem – note the black garlic in the recipe above, and have you tried our new fermented olives sold near our refrigerated krauts and kimchis?” asks Debra).

Limit processed and refined foods, meat and dairy. No single meal is going to make or break your PMS. But over time, daily foundational changes can tip the scales towards hormones in balance, and a more comfortable period.

Before we get into supplements, let’s talk for a moment about what causes PMS. Lots of things do, of course. But I want to talk here about estrogen dominance.

Simply put, there is a shifting balance over a woman’s cycle, and a woman’s life, between estrogens on the one hand, and the hormone progesterone on the other. They play off each other, complement each other, and oppose each other in various ways.

In particular, the week or so before a woman bleeds, the body expects a sharp drop in circulating estrogen, and sharp spike in progesterone. Without this, we get symptoms of PMS[1].

Often, we can trace estrogen dominance to bad fats, which hamper communication within the endocrine system; to an influx of xenoestrogens from poorly raised meats and dairy, pesticides and plastics; or deficiencies in the nutrients we need to excrete them down. [Debra says the deodorant we choose can also shift that influx of xenoestrogens.]

A lot of supplements work by addressing estrogen dominance. Let’s get to them now.

LIVER SUPPORT: It’s the liver that processes excess estrogens. So a sluggish liver can amplify hormone imbalances. Herbal support may include plants like milk thistle seed, burdock, dandelion root, and bupleurum. Look for a formula that contains these and/or other cooling liver herbs, especially if you have oily skin, or a hard time digesting fats, or are putting undue strain on your liver. Liver support will do you good – and for more than just your PMS.

XIAO YAO (“easy wanderer” in English) is a classic Chinese formula. In traditional Chinese terms, Xiao Yao “clears stagnant heat from the liver.” In Western terms, that (sort of) translates as “releases pent-up emotions and frustration.” However it works, it does work.

I reach for Easy Wanderer, for the woman with one primary PMS symptom – the stereotype! – the tendency to go from zero to sixty emotionally in a split second. (Not to be sexist here: Xiao Yao is also useful for men and children who exhibit the same behavior).

It will probably take one or two full cycles before Easy Wanderer kicks in. I like the Pine Mountain brand because it’s inexpensive, it works, and the company is a non-profit. I’m going to suggest eight pills a day – four in the morning, and four in the evening. You can ease back the dose eventually.

FISH OIL and KRILL OIL are both sources of healthy omega-3 fats, which can elevate mood, and tamp down impulsivity.  Where Easy Wanderer is more about extremes of mood – sudden swings – fish and krill oil are more about the depressive blahs and blues.

With fish oil, I shoot for 2,000 mg a day of a specific constituent called EPA. With krill oil, I recommend 2,000 mg a day of whole krill oil. Krill will cost more, but get you there with smaller pills. And some evidence indicates it may work better.

VITAMIN B6 facilitates close to 100 chemical reactions in the body, including the formation of mood-regulating chemicals like serotonin, dopamine, and norephinephrine. The brain also needs B6 to process fats and oils.

B6 has been well studied in PMS, with good results, especially for mood symptoms and water retention. 50-100 mg, twice a day is a good start, to be taken throughout your cycle.

Many people, myself included, enjoy the side effect of more vivid dreams when we take B6. In fact, lack of dream recall is a major indication of less-than-optimal B6 status.

MAGNESIUM: Low magnesium is common in women with PMS. Meanwhile, magnesium tends to be helpful, especially around anxiety and cramping. Consider this mineral especially if your diet is low in magnesium, or your muscles feel tight. Folklore suggests chocolate cravings are a symptom of magnesium deficiency, but I don’t know… After all, chocolate is delicious independent of nutritional status. Shoot for 400-600 mg of magnesium a day as magnesium glycinate.

ZINC: One study out of Iran examined 142 women with PMS. Women were given 50 mg of zinc every day for the second half of their cycles. While mild PMS didn’t change much, the incidence of moderate to severe PMS decreased slowly, finally reaching a 70% reduction after 3 months. Zinc may be especially helpful with acne that gets worse around your period.

CHASTE TREE (Vitex agnus-castus) is a traditional herb for hormone imbalances – and a well-researched one. It increases the release of luteinizing hormone (LH) from the pituitary, which in turn stimulates the release of progesterone. It may also help pituitary function in general.

A 2017 metaanalysis examined 14 published trials. Some trials showed large, impressive benefits. In others, the benefits were more minor. One way or the other, though, Vitex was helpful in 13 out of the 14 studies, with a variety of PMS symptoms.

You usually take vitex throughout your entire cycle. A standard dose is 1,000 mg a day.

STINGING NETTLE (Urtica dioica) leaf is a diuretic, specific for water retention. You take this one as needed (you don’t need to “build up.”) Among the dozens of herbal diuretics, I like this one because it makes a nice tea, hot or iced. And in the words of the herbalist Michael Moore, “it works well for major premenstrual water retention particularly since it also has astringent effects that keep it from over-stimulating the uterine lining. Some diuretics… stimulate the uterus and create the potential for disorganized menses. Others… can be so astringent as to impede flow.”

For MENSTRUAL CRAMPS, most of the suggestions above will take the edge off. But for serious cramps, you’re going to want something extra. Enter the herb CRAMP BARK (yes, that is its actual name). I like liquid extracts here because they work faster.

It’s going to take a while to find your optimal dose. Start with 30 drops on an empty stomach. Wait 20 minutes. Then take another 30 drops.  Repeat as needed until it works. Once you find your dose, you won’t have to go through the whole ramping-up process next time. Some women find WILD YAM extracts work as well or better than cramp bark.

And then there’s CBD, an exciting, new-to-the-market, legal cannabis derivative that can help with pain, spasm, and agitation. Some women have found near-immediate relief from menstrual cramps with CBD BALM applied topically to the lower abdomen. So far, we’ve had the most feedback with the “Gold Balm” from CV Sciences, which supplies 75 mg pure CBD per ounce.  Try rubbing a thin layer over an area roughly the size and shape of a nerf football or a coffee can. You may find you want to re-apply a few more times throughout the day, as needed.

For CYCLIC BREAST PAIN or TENDERNESS (including Fibrocystic Breast Disease), most of the recommendations above will help. But what really seems to shine are FLAX LIGNANS – compounds from flax seeds which help reduce levels of the more aggressive, problematic estrogens in the body. Try using 3 Tbsp daily of powdered flax seed. Or 1 250-mg capsule of flax lignans. The capsule is probably easier, but you’ll miss out on some of flax’s other benefits, including healthy fiber and fats. Interestingly enough, it’s not the flax lignans which do the trick, but compounds called enterolignans – metabolites produced from lignans by healthy gut bacteria.

GINKGO BILOBA: In a placebo-controlled study with 165 women, ginkgo extract was shown effective for water retention and breast tenderness. The dose was 80 mg of a standardized extract twice a day, from roughly two weeks before their period until their period ended. Another study found a 26% reduction in overall PMS symptom scores when taken daily.

PROGESTERONE CREAM is just what it sounds like: bio-identical progesterone that absorbs through the skin. Since progesterone cream doesn’t just “support,” but actually overrides the body’s own estrogen/progesterone balance, it’s important to coordinate its use with your body’s cycle. Here’s Tori Hudson, from her Women’s Encyclopedia of Natural Medicine:

“I largely use transdermal creams that contain more than 400 mg progesterone per ounce. For severe symptoms that have not responded to nutritional, botanical, and lifestyle changes… I recommend ¼ tsp progesterone cream twice daily starting at mid-cycle and stopping the day before menses is due. For women whose symptoms begin at ovulation, I recommend ¼ tsp per day from day 8 to day 14 (do not use during days 1-7 while bleeding), and then ¼ tsp twice daily until menses begin, as described above. The best sites for rubbing in the cream include the palms, inner forearms, chest, and inner thighs. Also, it is best utilized when rotating sites of application.”

FINALLY, if your PMS is bad enough, it might be worth looking deeper. A 1985 study found that 75% of women seeking medical help for PMS had something else going on which made things worse. Mostly depression or other mood disorders, although substance abuse problems, eating disorders, and oral contraceptives were also issues.

[1] The other place we see a lot of estrogen dominance is menopause.  Often, progesterone drops precipitously right when menopause begins, while estrogen declines more gradually.  So for the first year or two, while progesterone is low, and estrogen isn’t, menopause can feel a lot like PMS – and can be treated many of the same ways.