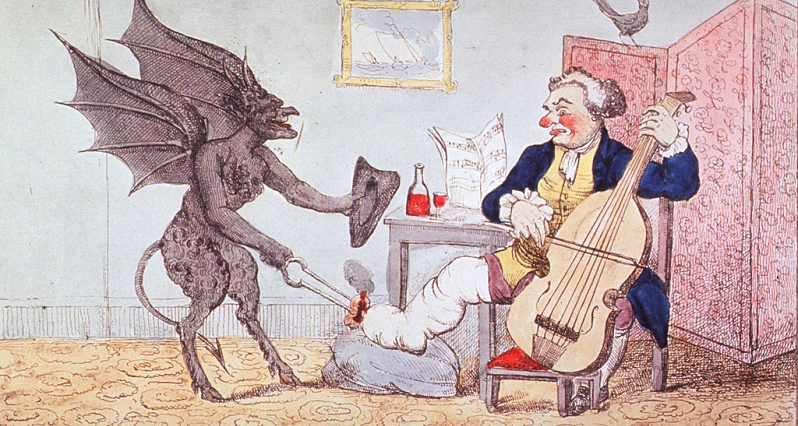 Origin of the Gout, illustrated by Henry William Bunbury 1750-1811. Courtesy the National Library of Medicine.

A slight reworking of an article from 2014

Gout: the erstwhile “Disease of Kings,” once limited to the kingly (i.e. wealthy) classes.  But no more.  No longer do just the wealthy have consistent access to rich, fatty foods and copious alcohol.  Today, Taco Bell and Budweiser put all that within reach of the rest of us.  And now, even among those who choose to eat healthy, gout is on the rise.

Milk, on the other hand, is almost entirely purine-free, because it doesn’t do anything in the animal.

Research aside, here’s what I know: dark cherries work better than Rainier cherries, and tart (Montmorency) cherries work the best.  A cup of juice a day is a good daily practice to prevent attacks.  At the very least, the black cherry juice sure beats O.J. on taste.  (There’s also been research where daily cherry intake reduces soreness after working out.)  During an acute attack, you might want to down a quart or more of cherry juice a day.  Or you can get cherry juice concentrate and add it to sparkling mineral water to make a therapeutic, refined sugar-free “soda.”  I like Gerolsteiner mineral water for flavor, and I like the fact that it also kicks in some natural calcium.

Duke likes to talk about how he took allopurinal daily for nearly two decades to control his gout; how he switched to celery seed some years ago, and hasn’t had an attack since.  How he danced barefoot and drank Peruvian rum and still didn’t get gout.  James Duke is always a storyteller.