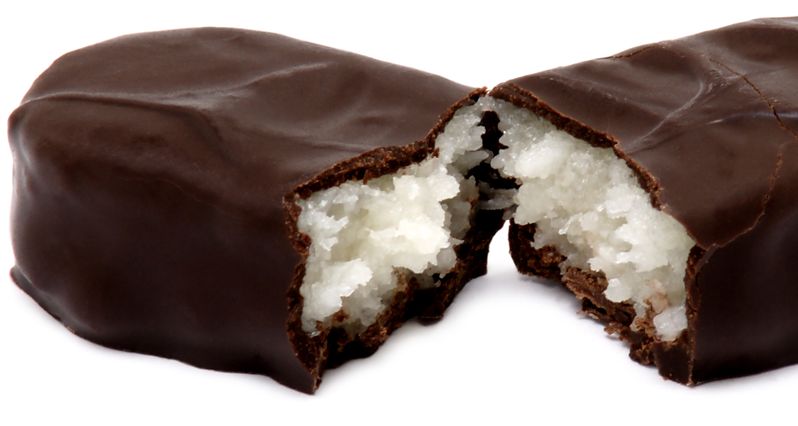 What are the five foods? Hint: this represents two of them!

You’ve probably have heard the snippets on the nightly news: “Chocolate may reduce the risk of heart disease.”  “Chocolate protects against cancer.”  “Chocolate reduces the appearance of wrinkles.”  Which would seemingly be our cue to start eating some.  But there’s always something in the news anchor’s tone of voice (a tone usually reserved for human interest stories like somebody’s pet cat that can play Mozart on the trombone), which implies that, as interesting as the story may be, we shouldn’t take it too seriously.

Because everyone knows that chocolate isn’t – couldn’t possibly be – healthy.  Right?

Folks, chocolate is healthy.  It reduces our risk of heart disease and cancer.  It lowers blood pressure, and helps control blood sugar.  It contains some of the same antioxidants as green tea.  In one study, the equivalent of a bar of dark chocolate every day for 6 weeks reduced wrinkles in healthy women.  Male Harvard graduates who consume chocolate live a year longer than those who don’t.

Just bear in mind before you sit down to that towering slice of quadruple-layer chocolate cake smothered in frosting, you’re sitting down to a lot more than just chocolate.  You’re also sitting down to white sugar and white flour and enough trans-fat to send a small elephant into cardiac arrest.  Ideally, you’d look instead for something with a high content of cocoa solids and very little “filler.”  In other words, dark chocolate – the darker the better.  Many of our premium brands now list a percent rating for cocoa solids so you know exactly how much you’re getting.

Better than even dark chocolate is the pure, raw cacao bean itself.  (The percent rating here is 100).  To be honest, I didn’t like my first taste of raw cacao.  It’s not sweetened; I thought it was bitter.  That, however, has changed.  What once tasted bitter to me now tastes like the pure, distilled essence of chocolate, full-bodied, complex, something to savor.  The aftertaste lingers, delightfully.

But isn’t coconut full of saturated fats?  Why yes, it is.  And aren’t saturated fats bad for us?  Well, yes and no.  It gets complicated.  But even in a worst-case scenario, where saturated fats really are as bad as they’re made out to be, bear in mind that none – I repeat NONE – of the research implicating saturated fats in heart disease, etc., has looked specifically at coconuts.

Perhaps the biggest difference is in how the body burns MCTs.  The body burns MCTs very efficiently compared to other fats.  This efficiency means two things for us: energy, and weight loss.  Most “normal” people won’t feel especially energized after a meal containing coconut oil, but it does make a difference for endurance athletes and others who burn through energy more quickly.  Coconut oil may also give more energy to people with fat malabsorption syndromes (gallbladder and liver problems, pancreatitis, inflammatory bowel disease, etc.)

And yes, coconut oil supports weight loss too.  The key here is the term diet-induced thermogenesis, which means “the burning of calories stimulated by a meal.”  In one study, a meal that got 40% of its calories from MCTs doubled the diet-induced thermogenesis of an identical meal that got 40% of its calories from regular vegetable oils.  In another study, where the “meals” consisted entirely of fats and oils, the MCTs increased diet-induced thermo-genesis three-fold.  And while the vegetable oil raised blood triglycerides by 68%, the MCTs had no effect.  So much for “artery-clogging” saturated fat!

(Of course, coconut oil has calories, and when you sit there eating coconut oil by the spoonful, you’re getting more than you’re burning.  So for weight loss, coconut oil shouldn’t be an addition to the diet as much as a substitution for oils that are already there).

Beyond their effects on metabolism, some coconut MCTs are strongly antiviral and antifungal.  Two in particular, lauric and caprylic acid, are sold in pill form for these specific purposes.  Caprylic acid combats candida and other yeasts.  Lauric acid (or a related compound, monolaurin) fights colds and flus, and other more serious viruses.  The June 2006 Townsend Letter for Doctors and Patients contained two separate papers that made a compelling case for the value of coconut oil.  The theme of that issue was HIV/AIDS.  While there’s no conclusive evidence yet, there’s reason to believe coconut oil may be valuable in viral hepatitis.

And of course there’s coconut meat itself, rich in healthy coconut oils, as well as plenty of fiber. There’s coconut flour for gluten-free baking, and coconut juice (a.k.a. coconut water), which is very different than coconut milk.  Coconut juice is low-cal, loaded with more potassium than any drink I’ve ever seen.  It’s one of my favorite hot-weather beverages, and the potassium replaces a lot of what we lose when we sweat.

BACON: Okay, just kidding.  Bacon isn’t healthy.  But isn’t it nice to dream?  (But while I’m on the subject, I should mention we carry duck bacon.  Duck fat is actually pretty healthy as animal fats go.  And besides, our duck bacon contains half the fat of regular pork bacon).

My grandmother was born in 1917, and lived past the millennium.  She saw food fads come and go.  “And every ten years,” she said, “they change their minds about eggs another time.  First they’re healthy, then they’re not, then they are again.”  So as the food faddists argued back and forth over the decades, my grandmother developed and then implemented her own simple and elegant solution to the Great Egg Controversy: she would keep on eating on eating as many eggs as she damn well pleased.

Then there was the 88-year-old man who ate 25 eggs a day and had normal cholesterol, reported on in the New England Journal of Medicine.  He made some headlines!  Then there was the study published a few years back in the Journal of the American Medical Association that found that one egg or more a day did not raise one’s risk of stroke or heart disease versus eating less than one a week.

Eggs contain cholesterol, it’s true.  But they’re also our richest source of lecithin, a phospholipid emulsifier that keeps cholesterol from sticking to blood vessel walls.  Lecithin also helps rid the body of excess fats, and is beneficial to the brain and liver.  Egg yolks are also rich in the yellow pigment lutein, which has recently garnered a lot of attention for eye health.  But it turns out lutein also protects cholesterol from oxidation.  (A recent Tufts University study found that lutein from eggs absorbed twice as well as lutein from spinach, and three times better than lutein from pills).   Eggs are packed with fat-soluble vitamins D, E, and A; b-complex vitamins, and zinc.  And as a protein source, they’re hard to beat.  Truly free-range eggs are also very rich in heart-healthy omega-3 fatty acids, the same good stuff that’s in fish oil.  (Speaking of which, fish eggs are a true superfood as well).

The debate surrounding alcohol these days is whether or not a moderate intake of whiskey drinks and beer will lower our risk of heart disease and various other ailments.  And some evidence definitely points in that direction.  There is no debate, however, about red wine.  Simply put, a glass or two of red wine a day (ideally not at breakfast), lowers our risk of heart disease.  The antioxidants in grapes are nice and protective, and fermenting them only seems to make them better.  Now the only question is, do we need a 1957 Chateau Mouton-Rothschild, or will the stuff that comes in a 5-liter plastic pouch work just as well?

I remember reading an interview with some famous chef in the Boston Globe years ago, where he said that the secret to making a great steak was to sprinkle it with gourmet grey Celtic sea salt.  He said the Celtic salt simply brought out the flavor like nothing else.

White salt is like white flour and white sugar: a highly refined product with almost all of the good stuff removed.  Grey salt, on the other hand, is more than just sodium chloride.  It’s packed with trace elements from the sea.  Not only does this add a roundness of flavor, but a nice bit of nutrition as well.

Now we can choose between Celtic grey salt, Indian black salt, red salt from the beaches of Hawaii, pink salt mined from the mountains of the Himalayas, and many other gourmet options.  Bear in mind, people on a restricted-sodium diet will want to go easy on the gourmet stuff, too.  (While gourmet salts will probably raise blood pressure less than white salt, the claims being made by some manufacturers that they flat-out aren’t a problem are dangerous and irresponsible – and untrue).

So what’s next?  Are we going to discover, for example, that partially hydrogenated soybean oil is heart-healthy?  That yellow dye #5 is a cure for hemorrhoids?  That Cap’n Crunch reduces arthritis pain?

Probably not.  You see, there’s a fundamental difference between coconut oil and partially-hydrogenated soybean oil, between Cap’n Crunch, and a nice egg for breakfast.  Coconut oil, eggs, chocolate, wine, and salt are all traditional foods, treasured by our ancestors for millennia before the food scientists and the agricultural chemists and the media started meddling and making their pronouncements.  Once upon a time, our diets were informed by tradition, culture, and yes, wisdom.  Our ancestors treasured these foods for a reason.

Now you turn on the nightly news, and it seems as though the food scientists and agricultural chemists and media are rediscovering all this.  To which I say, great.  Just let’s not call it a breakthrough.  Or “news.”