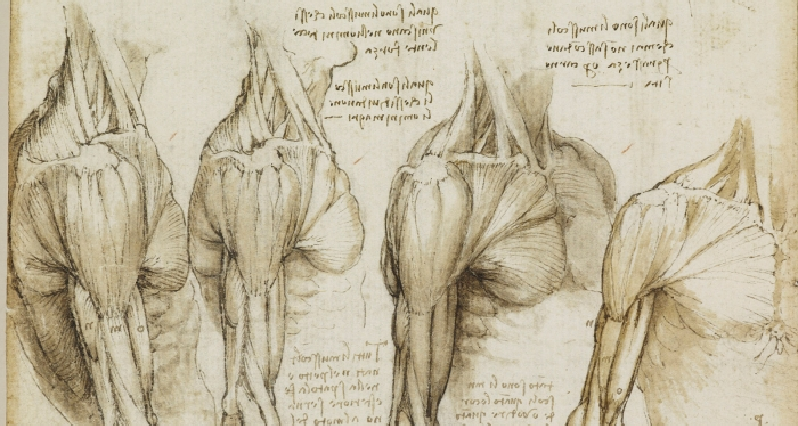 Anatomical studies of the torso by Leonardo da Vinci (ca.1510)

You can catch up on last month here.

The mineral magnesium is the one-size-fits-all solution for fibromyalgia.

At Debra’s, magnesium is our best-selling mineral, outpacing even calcium. People buy it for bone health, heart health, and muscle health1. In particular, magnesium can reduce or even eliminate those annoying, even debilitating, leg cramps so many of us get at night. It can ease those tight knotty muscles across the neck and shoulders. In short, magnesium relaxes tight muscles.

To be clear, magnesium won’t over-relax anything. No matter how much you use, you won’t overshoot the mark and get all jelly limbed. Magnesium is about returning you to a healthy baseline.

As you can imagine, this fits right in with fibromyalgia.

To be clear, magnesium is not a “miracle cure” for fibromyalgia. It usually gets you partway to pain-free, not all the way there. Still, “partway” is plenty, especially for something with so much upside, and almost no downside.

Bear in mind, there are different kinds of magnesium, and they’re not all created equal. Here, we want to look for a well-absorbing form such as magnesium malate or magnesium glycinate. Not only do these absorb better than most, and work better than most, they also are easier on the digestion than most – vs. other forms of magnesium which are more likely to cause loose stools in higher doses. A standard dose is 200-400 mg. A standard regimen is 1-3 doses a day.

“Epsom salts” is another term for magnesium sulfate, a magnesium compound that dissolves, usually in bath water, and absorbs through the skin. It may or may not have some of the systemic heart and bone effects of oral magnesium. But it sure works great on the muscles. A nice, long soak is sometimes the best thing after a long day. After a half-hour, you get out and feel like a new person.

Nobody has proven yet that viruses “cause” fibromyalgia. The evidence isn’t there. However, we do know that a lot of people develop fibromyalgia following a viral infection. We also know that people with Fibro are more likely to carry a high viral load, especially the “slow viruses” like Epstein-Barr and Mono – viruses which are generally associated with fatigue and muscle pain.

So, one approach to fibromyalgia is to load up on herbal antivirals – and see what happens. In fact, if I had fibromyalgia, this is the first thing I’d try. Not because it’s proven effective through scientific research. (It isn’t). Or because it has an especially high success rate in my personal experience. (It doesn’t). Or because, if it does work, you’ll notice results quickly. (You usually won’t). No, I like using antivirals to address fibromyalgia because if they work, they have a legitimate shot at addressing fibromyalgia at the root, and creating long-term, lasting improvements.

My two favorite broad-spectrum antivirals are the herb lomatium, and a formula called Isatis-6 from the 7 Forests company. I’d shoot for about 12 tablets a day of the Isatis-6, and 3 dropperfuls of lomatium tincture, in two or three divided doses. I’d expect to wait 3 or 4 weeks before seeing results, and maybe a few months before I could really solidify those results. For extra oomph, I’d supplement with 3,000 mg a day of the coconut fat derivative monolaurin, and 50,000 iu a day of vitamin A.

If that seems like a lot of supplements to take for something that might not work… I’ll admit that it is.

People with fibromyalgia tend to also suffer from depression. In particular, they tend to show low blood levels of serotonin, the neurotransmitter associated with contentment.

Of course, that begs the question: does Fibro cause depression, or does depression cause Fibro – or is the relationship even more complicated?

Either way, people with Fibromyalgia often benefit from herbs, supplements, and drugs that raise mood. Probably any good antidepressant could make a dent, but the research with the supplements 5-HTP and SAMe shows good results for Fibromyalgia.

5-HTP (5-hydroxytryptophan) is a metabolite of the amino acid tryptophan, and a direct precursor to serotonin. In one study, it was shown to improve mood, sleep, and pain levels in fibromyalgia patients. Standard doses range from 100-200 mg, 2-3 times a day. We should be cautious about using 5-HTP with pharmaceutical antidepressants.

SAMe (s-adenosylmethionine) is another natural antidepressant. SAMe works by facilitating the production of not just serotonin, but also the other major happiness neurotransmitter, dopamine. (Again, serotonin is for stability and contentment. Dopamine is for focus and pleasure). SAMe has been the subject of two small clinical trials in fibromyalgia. In both cases it improved mood (not necessarily sleep, though), and saw a reduction in pain as well. A standard dose is 800 mg a day.

Which one would I choose? 5-HTP puts up better numbers with fibromyalgia pain. But SAMe is more effective at raising mood, especially if there’s a component of lethargy. It’s up to you.

Fibromyalgia is not an inflammatory disease in the sense that arthritis is. But inflammation is nevertheless involved. (And of course, some diagnoses of fibromyalgia are imprecise or sit alongside other, more classically inflammatory conditions). Occasionally, herbal anti-inflammatory formulas will help – especially if there’s other evidence of systemic inflammation. They’re worth a try.

Another, more recent study from 2016 followed 58 patients with chronic widespread muscle pain and low starting vitamin D levels for 3 months. Supplementing with 50,000 iu vitamin D per week led to significant reductions in pain; and improvements in sleep quality, mood, and energy levels. Not everyone in the study met the diagnostic criteria for fibromyalgia, but 30 of them did. At the end of the 3 months, 10 of those original 30 no longer did. (Do we call this a “cure”?)

50,000 iu a week is around 7,000 iu a day, the standard corrective dose for vitamin D in the US. There are few risks in taking this amount of vitamin D. A slightly increased risk of kidney stones is about it.

CoQ10 is a nutrient that naturally occurs in every cell of our bodies, where it has an essential role in generating energy. Energy being the currency of life, it’s certainly not surprising that CoQ10 has been shown to help in literally dozens of health conditions2. CoQ10 is especially concentrated in body tissues that are constantly working – the brain, the heart, and the kidneys. A small study in 2013 tracked 20 fibromyalgia patients who were given either 300 mg CoQ10 or a placebo for 40 days. The CoQ10 group saw a significant reduction in pain, morning tiredness, and number of tender points.

And finally, a word about Central Sensitization and the Venn Diagram of Fibromyalgia Diagnoses

Central sensitization is a condition where the brain amplifies sensory input. Light touch becomes light pain. Light pain becomes severe pain. Sometimes bright lights seem brighter, loud noises harsher, strong smells overpowering. Meanwhile, there’s nothing structurally wrong with your nerves – or your muscles or eyes or nose. It’s all in your head, so to speak, even while it’s very real.

Some will suggest that Central Sensitization is a component of fibromyalgia. Others will argue that it isn’t. I tend to fall in the latter group – most of the time.

Long story short, what I’m trying to say is your diagnosis may be accurate – but it may not be the only thing going on. It’s worth exploring if there is anything else.