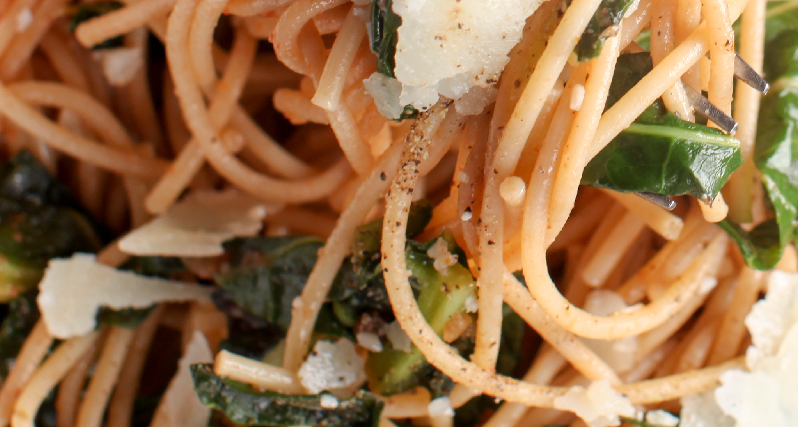 Spring is typically a time we eat more lightly, and that’s certainly a good thing. Eating those spring greens that are poking up everywhere is what we are meant to do when we eat with the seasons, right? But some nights, I just want that bowl of pasta, and do you know what my new favorite pasta is? The Rustichella d’Abruzzo Organic Farro spaghetti from Italy. This pasta leaves me feeling good. My tummy appreciates farro.

What is farro? An ancient grain, and the Italian word “farro” encompasses three varieties of heirloom grains: einkorn, spelt and emmer wheat, all of which are lower in gluten, higher in protein, and also have higher amounts of micronutrients.  It’s the whole grain pasta that I enjoy!

In a large pot of salted boiling water, cook farro spaghetti following the directions on the package (I like mine on the softer side). Meantime, in a large skillet, gently warm EVOO, garlic, herbs, black pepper, shrimp and kale. Stir for two minutes. Drain pasta into a colander. In a large bowl, or back in the spaghetti pot, toss pasta with shrimp mixture and half the Romano. Dish out, top with remaining Romano.

*Not a fan of kale? Try broccoli instead. (I put the broccoli florets into the same pot the pasta is cooking for the last two minutes and then just drain spaghetti and broccoli together in my colander in the sink.)