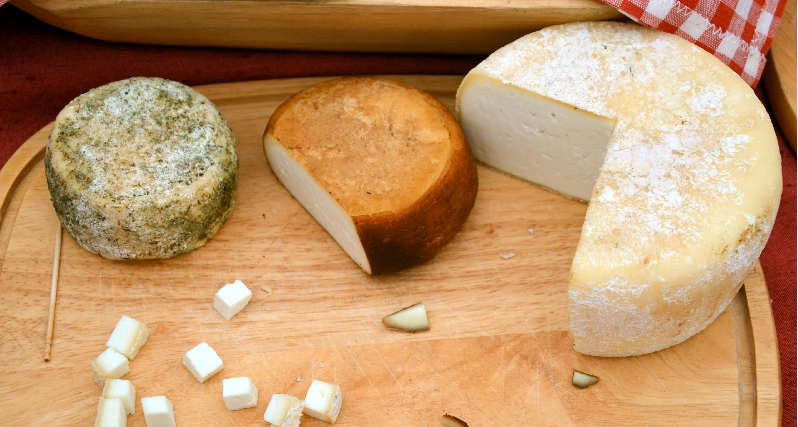 The other day as the store was about to close, I turned to the fridge to make my important decision for the evening: what kind of cheese to buy to melt over my broccoli, black beans, and diced tomatoes for dinner?  It was down to two finalists — Neighborly Farms organic, pasture-fed Green Onion Cheddar; and the 5-Spoke Farms organic, raw, pasture-fed Herbal Jack.  It was a close race although I eventually did give the edge to the Herbal Jack.  But then my practical side kicked in: maybe I should get the Organic Valley product instead.  Not a bad cheese by any measure.  Heck, it even won an award.  But more importantly, Organic Valley is a large operation, with an efficient supply chain and distribution networks, and centralized production facilities — in other words, Organic Valley was going to be cheaper.

Only it wasn’t!  Organic Valley’s price had just gone up.

Lots of prices are going up these days, some of them drastically, due to the rising cost of fossil fuel.  Fuel is needed, not just to transport goods, but to run the machines that make them, package them, and refrigerate them.  Fuel is used as fertilizer.  Fuel is used in irrigation ? it runs the pumps and in marketing.

No wonder things are going up in price.  Every few days, it seems, we receive yet another letter from one of our vendors apologizing.

And it’s the largest producers that are getting hardest hit.  Local, small-batch, handmade products, on the other hand, are mostly doing alright.  That night when I was picking a cheese, the Neighborly actually came out less expensive than Organic Valley, and the 5 Spoke was close.  Why is that?

Like I said, Organic Valley has an efficient supply chain and distribution network.  But what exactly does that mean?  Well, farmers around the country receive shipments of organic fertilizer from around the world, and grow organic feed, and then send shipments of that feed to dairy farmers, who feed it to their cows, and then milk the cows and send the organic milk to Organic Valley in Wisconsin, which then makes organic cheese from it, and then sends it out to a wholesale distributor in Dayville, CT, which refrigerates it until it’s time to ship it out to us.

It all runs like clockwork.  Yet if you were to trace the lines on a map, the country would be marked up like a spiderweb.  (And Organic Valley cheeses are a lot less complicated than, say, a bag of Doritos, or the newest “Extreme!” creation from Taco Bell).

Now compare this to Neighborly or 5 Spoke.  There, the cows eat what’s under their feet.  The cows are milked on the farm; the cheese is made on the farm.  And then it gets shipped to us when we  and the cheese are ready.

Efficient?  Yes, absolutely.  But it’s a different kind of efficiency than Organic Valley’s.

The small farm model of efficiency is very conservative.  It wastes little, and it does not borrow against the future.  Ecologically, it’s like a man who works five years to earn money to buy a house.  The fossil fuel-based model of efficiency, on the other hand, is based on instant gratification, like a man who empties his trust fund to have the house right away.  (Fossil fuels are our ecologic trust fund).

In the beginning, the trust fund baby may seem a lot more efficient to himself, especially.  He has the house, and he hasn’t had to work very hard for it.  The house comes cheaply to him.  He sees the other man laboring away and thinks of all the wasted, unnecessary, inefficient time and (human) energy spent.  Five years in, however, the man who works for his money has his house  and his savings intact.  Meanwhile the trust fund baby is broke.  Unable or unwilling to work, now he begins selling off assets.

Burning through our fuels, or our bank accounts, for immediate gains only works because we’re deferring costs into the future.  We will pay we’ll just pay later.

And we’re burning through it so quickly!  Some estimates have it that for every calorie of cold cereal that ends up on a store’s shelves, ten calories of petroleum are burned making it.  It doesn’t take an economist to understand that borrowing at 1,000% interest is a bad idea.  But that’s exactly what we’re doing.

There’s a reason why, in our store’s expansion and remodeling, Debra felt so strongly about putting our bulk foods right in front when you enter.  Rice may be a lot less pretty-looking than rice pilaf.  Plus we make less money on it.  But environmentally, it’s no contest.

Now don’t get me wrong: I love Organic Valley.  Organic Valley is a cooperative, they donate a hefty chunk of their profits to charity, and they do a lot of work locally.  And unlike other large-scale dairy producers (ahem, Horizon), they work to preserve organic standards instead of gutting them (Horizon) until a citizen’s group forces you to stop via lawsuit (Horizon: a division of Dean Foods).  Organic Valley is one of the few enterprises that have gotten this big, and yet stayed this good.

But the bigger you are, the more distance you have to cover.  Which means you’re depending on cheap fuel to spin the wheels.  Cheap fuel means cheap transport, which makes centralization and industrialization more cash efficient than local, handmade production.  Which ultimately means that when it comes to our food, our clothes, and everything else we buy and sell, we’re dealing with strangers.  Heck, Organic Valley might offer to introduce us to their farmers and no doubt they are all fine people but there are still 1296 of them across the country.  Ron and Linda farm at Neighborly, in Vermont.

Cheap fuel also means cheap labor, as machines amplify human output.  Where once a farmer could till only so many acres, he can now till 10 times, 100 times as many on a given day, and on into the night.  Of course, as Wendell Berry has pointed out so eloquently, you do get what you pay for, and it’s impossible for a farmer to put as much care into 100 acres as he is could have put into ten… and let’s not even get into what happens to the other nine farmers rendered unnecessary by the efficiencies of the fuel-based economy.

Cheap fuel also means cheap labor, because we can outsource work to whomever does it the cheapest, and then have the finished goods shipped back to us.  Upset to see our jobs shipped overseas?  Blame cheap fuel.

The point isn’t to celebrate the rising price of gas.  I‘m sorry to see anything get expensive.  But on some level, it seems right that certain costs are rising.  For so long now, they were artificially, unreasonably cheap.

And the cost has never reflected the fact that the supply we’re dealing with is finite.  We will run out eventually.  And even if solar and hydro power fulfill our wildest dreams and power everything, we still won’t be able to make plastic or fertilizer materials out of them.

For a long time now, people who have done things right have been penalized for it.  You want to buy organic, local, fairly-traded goods that respect the land, the workers, and the animals?  Good for you now fork over the dough.  The benefits of your decision, for the environment, for public health, for community and humanity, are shared by all.   But you alone shoulder the costs.

On the other hand, when someone buys the “wrong” stuff, we’re all subsidizing their decision.

Again, I’m not really happy to see fuel costs rising.  I’m not happy to see any costs rising.  But it’s probably a good thing.  It’s certainly not any form of rampant inflation, but rather, a move towards sanity.  Things that cost more for the planet now cost more to your wallet.  Which is a kind of justice actually.

The best part of it really is that people like me no longer have to hem and haw, weigh our options, and then rationalize our decisions.  When confronted with the myriad options at the cheese fridge, finally, the choice is clear.

And by the way, for an absolutely stunning piece of research and writing on this subject, check out “The Oil We Eat,” by Richard Manning, from the February, 2004 issue of Harper’s.  Online at http://www.harpers.org/archive/2004/02/0079915.  I can not recommend this piece highly enough.