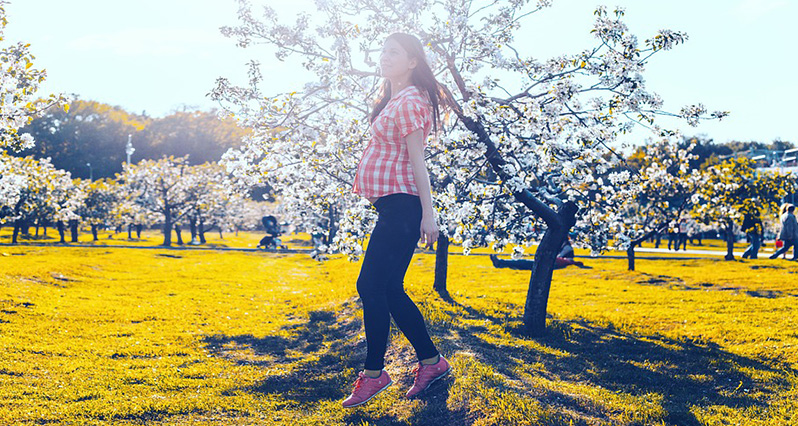 Please note: picture may not reflect the reality of pregnancy

(Part 2 Next Month: Supplements for Pregnancy)

Pregnancy is an important time to eat well.  To break bad habits and reinforce good ones.  Pregnancy is also a time when it’s easy to get carried away by emotion and anxiety.  So, on the one hand, I’m encouraging you to eat as healthy as you can.  And on the other (how do I put this?): please relax.  Even if you eat the occasional non-organic grape (or Dorito™), your kid can still get into Harvard.

Now, let’s break this down into trimesters.

A lot of women walk into their first trimesters as nutritional idealists.  They’re going to eat perfectly.  Caviar and kale.  Avocadoes and walnuts.  Fish oil and grass-fed beef liver.  Three meals a day.

And then – morning sickness.

Sometimes the best diet for the first trimester is whatever you can keep down.  And that’s okay.

After all, in the first month or two, all the growing embryo needs are minor amounts of basic nutrients: vitamins and minerals, proteins and fats.  And if you’ve been banking these leading into conception, you’re already ahead of the game.  So, eat what you can (that doesn’t mean live on cake!) and get ready for the second trimester when you will eat super-healthy.

If starches are all you can keep down, make sure they come from whole grains (vs. white rice and white flour); and from a variety of grains (vs. the same grain, again and again).  Oats one day, buckwheat the next, then corn, quinoa, wild rice, etc.  Each one will fill in the others’ nutritional gaps.

If all you can keep down is bread and butter, look for whole grain bread with plenty of seeds, and dark yellow pastured butter.  If you feel up for it, put a sliced hard-boiled egg on your toast and butter, with a shake of salt.  Try a cup of lentil soup when you’re ready.  Or some chicken soup.  Or split pea.   Throw some vegetables into the soup.  You’re already covering the basics, and you’re doing great.  Eat a tomato.  Eat an apple.

Fermented foods like yogurt and live sauerkraut may be especially valuable.  First, they’re easy to digest, and help you digest other foods.  Second, they’re good sources of vitamins.  And third, they introduce healthy probiotics into the gut, which help develop baby’s immunity and a host of other benefits we’ll talk about next month.

It’s in the second and third trimesters that proactive nutrition becomes more important.

Pasture-Raised Eggs are easily Pregnancy Food #1.  Our richest source of brain-healthy choline (more next month), plus vitamin K2, phospholipids, omega-3 DHA, and cholesterol to develop baby’s organs and immune system.  Whatever notions you had going into pregnancy about “not eating too many eggs,” throw them out – at least for the next nine months.  A day with three eggs is a good day.

Insist on truly pasture-raised eggs, a.k.a. “the expensive ones,” which can be exponentially richer sources of omega-3s and vitamin K.

Palm Fruit Oil: one of our very richest sources of tocotrienols, concentrated members of the vitamin-E family that support healthy cell division.  One study compared rats from mothers that had either been given diets rich in omega-3 DHA, tocotrienols, or a standard control diet.  The tocotrienol babies appeared smarter.  Two or three times a week, use a heaping teaspoon of palm fruit oil to cook with.

Fruits and Vegetables:  It’s traditional in these sorts of articles to call out specific types, like spinach and yams, for some arbitrary reason.  I won’t.  Just eat fruits and vegetables.  Lots of them.  A variety of them.  They contain vitamins and minerals to make everything work right.  They have fiber, to nourish gut and immune health, and keep you regular.  If the vegetables are making you gassy, try different vegetables.  Or simply try steaming, roasting or sauteéing them.

Fermented Foods: Fermented foods aid digestion, so you’re reducing your risk of heartburn and reflux.  They also contain healthy probiotic bacteria, which help keep our immune systems up and running, and help keep us regular.  Probiotics also prime baby’s immune system as he or she heads out into the world.  This means both stronger immunity (fewer infections), and better immunity (less immune dysfunction, such as allergies and asthma).

Nuts and Seeds: On a philosophical (but still very practical?) level, nuts and seeds are the reproductive parts of the plants, so they have a lot of “reproductive nutrition.”  Vitamin E-complex, B-vites, choline, healthy fats, and protein.  They’re also remarkably calorie-dense, for when the fetus is pressing on the

stomach, and you don’t have room for big meals any more.  Have a bag of hemp seeds and some slivered almonds handy.  You can sprinkle them on yogurt, soup, salad, pilafs, etc.  Some flavored roasted pecans make a nice snack.

Legumes (lentils especially, but also beans and peas) are good sources of protein and B-complex vitamins.  Nobody is going to be deficient because they skipped their lentils that day.  But they’re a solid source of so much basic nutrition, that they should be included in your meals.

Meats. I browsed a lot of blogs and top-ten lists before putting together my list.  For some reason, they all seem to say lean meats.  Why lean?  If your meats are from healthy, free-ranging animals with access to diverse, natural, wild foods, the fats are healthy as well.

Meats are a rich source of iron and B-vitamins, cholesterol and yes, healthy fats – if they are raised well.  A good serving of meat once or twice a week is fine.  I’m especially a fan of sardines and anchovies and herring – fish small enough you end up eating some organs whether you realize it or not.

Dairy is a source of calcium, phosphorous, protein, and small amounts of vitamins A and D.  Moderate amounts of dairy, especially fermented dairy like yogurt, can support a healthy pregnancy.  Having said that, noted Herbalist-Midwife-Physician-MPH Aviva Romm suggests we go easy on the dairy during pregnancy.  In her experience, mothers who consume larger amounts of dairy while pregnant are more likely to have high birth weight babies that are harder to deliver vaginally.

Whole Grains: Wheat, oats, rye, barley, buckwheat, or teff: It doesn’t really matter what the whole grains are.  Whole grains – intact with their health bran and germ – support pregnancy in a real and substantial way.  Some grains like barley in particular are rich in prebiotic fibers that feed healthy gut bacteria – which can in turn help baby’s immune system.

Now that we’ve got “healthy” out of the way, let’s talk about foods and ingredients to avoid.

These include artificial colors and flavors, sweeteners and preservatives; fried foods and partially hydrogenated oils; and flavor enhancers like MSG.  Some of these are worse than others.  But even the best of them are potentially harmful.   Interfering with organ and brain development.  Blocking other nutrients from acting.  That kind of thing.  So why take a risk?  And anyways, these ingredients are all reliable markers for foods that are less-than-wholesome in other ways.

You should also avoid foods – even natural foods – that accumulate toxins.  For example, fish that concentrate mercury[1], plus rice (arsenic), chocolate (cadmium and lead), seaweed (heavy metals in general), clams and oysters (toxins in general) and farm-raised shrimp (a veritable stew of toxins)[2].  None of which is to say these foods are strictly off-limits.  But they do add to a cumulative burden, to which your fetus is especially susceptible.

Other foods to avoid include those that may harbor potentially dangerous bacteria.  Meaning, almost anything that hasn’t been boiled or baked or nuked.  Raw milk.  Sushi.  Uncured salami.  Potato salad that’s been uncovered out of the fridge all day in July.  Soft and mold-ripened cheeses.  Normally, I’m pretty lackadaisical about these sorts of things.  But when you’re pregnant, some infections you could otherwise shrug off can actually damage the fetus.[3]

Finally, you sometimes read that culinary herbs might be a problem during pregnancy.  For example, massive doses of lemongrass can cause birth defects.  Gigantic doses of nutmeg can cause miscarriage.  I mention this, not to scare anyone, but to do just the opposite.  Normal culinary herbs – and by “normal,” I mean used normally to flavor dishes, eaten in normal amounts – are not going to be dangerous.

There is evidence that caffeine can increase the risk of miscarriage and birth defects.  Most of that evidence, however, focuses on relatively high doses.  A general consensus is that it’s pretty much safe if you drink a cup or two a day (keep it under 150 mg a day) – unless you’re otherwise high-risk.  (Of course the safest thing is to skip coffee, if you can).

Large amounts of soy can throw off your estrogen levels.  And there’s animal research showing that, again, very, very large amounts can harm the fetus.  Meanwhile, there’s half a world of people who consume sane amounts of soy daily during pregnancy and appear to be just fine.

My advice?  Don’t worry about soy sauce, soy lecithin, or soy oil.  Try to limit soy solids to 3 or fewer meals a week.  If you’re looking for an alternative to soy milk (which is in turn an alternative to cow’s milk), consider hemp milk or coconut milk, both of which contain healthy fats.

Finally, a note about allergies.  Pregnant women are often advised to curtail intake of potentially allergenic foods, such as peanuts, tree nuts, milk, soy, gluten and shellfish, because they may give the baby an allergy.  Nothing could be farther from the truth!  In fact, the research is remarkably clear: occasionally consuming potentially allergenic foods during pregnancy (and while breastfeeding) reduces the risk your baby will develop an allergy to that food.  Although obviously, you shouldn’t eat something you know you’re allergic to.

[1] These are the fish at the top of the food chain – fish that eat fish, that eat other fish.  So shark and swordfish are big no-nos, but we also want to limit tuna and bluefish as well.  Fish oil supplements produced by responsible companies should be fine.  They are distilled and tested before bottling.

[2] Seek out instead rice that is farmed organically, on land that has been organic for a while.

[3] Everyone has to decide where to draw the line.  I will say that, on our end, we weren’t “perfect” about this rule.  We ate plenty of raw berries – blueberries and raspberries and mulberries – when they were in season, which many experts will warn you off of.  There was probably an unpasteurized soft cheese in there somewhere as well…