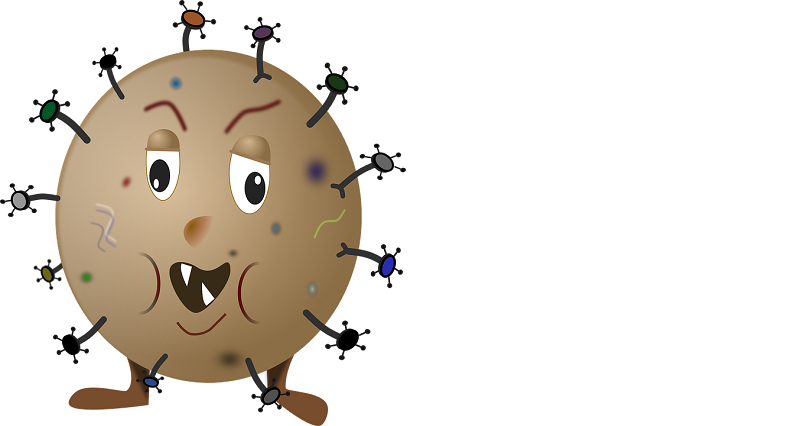 This illustration of a germ (a bacterium) is kind of inaccurate. First, because they don’t have eyes, teeth, a nose, or eyebrows. And secondly, because we’re going to be talking mostly about viruses.

Are you just an “average person” who doesn’t want to get sick? Here are three things you can do every day.

This is not exaggeration. Everything is supported by solid research. I take NAC daily.

NAC has also proven itself as a flu-preventer. In one study out of Italy, elderly men were given 600 mg of NAC twice a day, or placebo, over a winter season. Those who received the NAC were two-thirds less likely to report flu symptoms during the study period, even though blood tests showed they were exposed to the flu virus at the same rate.

NAC is also of value, not just in preventing winter viruses, but also in fighting them off. One study with colds found that NAC cut duration and severity by about half. It’s also a decent decongestant – you don’t make less mucous, but it tends to be thinner and easier for the body to manage.

I’m down with the circumstantial evidence on this one!

When I take vitamin D, not only may I be reducing my risk of a cold – and risk of a fracture – but also seasonal affective disorder (wintertime depression), phantom muscle pains, allergies, autoimmune disease, neurodegenerative disorders, heart disease, and cancer.

Even if it only does a small fraction of what we think, it’s still a bargain at pennies a day.

We make vitamin D when sun hits our skin. Most of us need very little, or any at all, in the summer. In the winter, I suggest between 1,000-5,000 i.u. a day. When we test low in this country, the standard corrective dose is a little over 7,000 a day for six weeks.

In the real world, we’ve seen some great data. One study randomized doctors and nurses in a single hospital to either nasal-irrigate (or not) twice a day, all winter long. It became a daily habit, like brushing their teeth. After three months, the ones who irrigated had half as many sick days as their coworkers.

You can irrigate the traditional way, with a neti pot (sort of like a specialized tea kettle), or a squeeze bottle. You’ll get used to it. Read more at https://debrasnaturalgourmet.com/23/

Are you a stressed and overworked person who gets sick a lot, or a person who takes too long to recover from a viral infection? Here’s one thing you can do.

By “stressed,” I mean overworked, underslept, skipping meals, and burning the candle at both ends. I mean overtraining. I mean spending all day in in the cold. I mean feeling worn down due to an illness, or just Life.

Here, I like herbal formulas that combine two kinds of herbs: those that enhance our immune response to viruses, and those that mitigate our physiologic response to stress.

The immune-enhancing herbs (with names you might know, like Astragalus, Lycium, and Maitake mushroom) upregulate healthy immune responses to viruses no matter what your situation. The stress response herbs (with names like Ginseng, Codonopsis, Schizandra, and Eleuthero) don’t build your immunity, but help preserve it in the face of all that stress.

These formulas are also wonderful in recovering from an immune challenge. Like if you had the flu a week ago, but you’re still lagging, that kind of thing. In particular, I’ve seen people come back from mono in just a few days.

There are a lot of formulas out there. Here, I want to highlight a wonderful formula called Astragalus 10+ from the Seven Forests company. Seven Forests is a division of The Institutes of Traditional Medicine, a non-profit out of Oregon that works to advance understanding and usage of Chinese medicine in the U.S.

You’re going to need to take these formulas for a few days before they kick in.

Are you coming down with something today? Or at high risk – i.e. you still feel fine, but someone just coughed all over you? Here are two things you can do.

There are many, many approaches here, and I’m going to narrow it down to just two. But if you need or want something specialized – you have body aches, you need something that tastes good for a kid, your ears are all plugged up, it needs to be safe for pregnancy, etc. – come on in and ask!

1. Wellness Formula, from Source Naturals. It’s not an elegant formula. It’s pretty much everything they could think of, all jammed in some gigantic pills that you take by the handful. But it works. Especially useful with head colds, and other viral infections from the neck-up.

2. The Immune Dragon Super Brew is a formula I put together some years ago. It combines my favorite anti-virals with a small amounts of other herbs that help modulate a healthy immune response – in a sense keep the immune system from tripping over its own feet as it rushes to respond. Especially valuable around the flu, and other deeper viral infections. May causes a skin rash in as many as 1% of people. Read our handout back in the supplement department on lomatium, its main ingredient. The Immune Dragon Super Brew tastes awful. You’ve been warned.