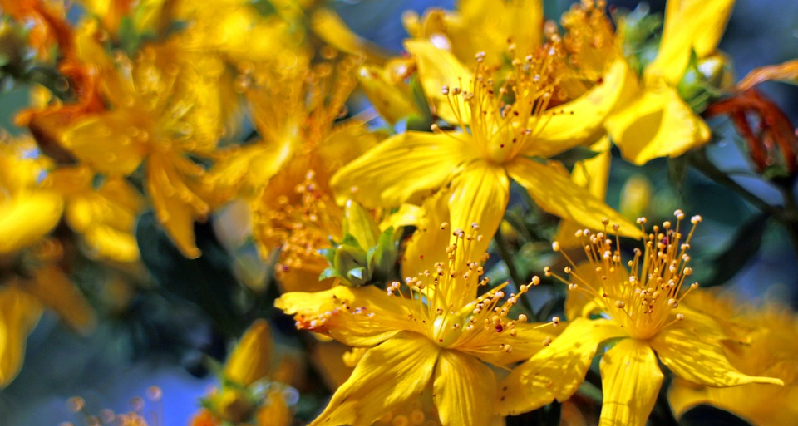 The herb St. John’s Wort is a gentle and reliable herbal aid for raising mood.  Oil extracts can also be used topically to heal wounds, and for nerve pain.

The herb St. John’s Wort (Hypericum Perforatum) is a safe and effective antidepressant with a long tradition of use, backed now by strong research. It has few side effects, if any. But before I get into the research, let me quote my favorite herbalist, Michael Moore, from his Medicinal Plants of the Pacific Northwest: (He does have a tendency to be opinionated…)

Hypericum is one of our best herbal therapies for depression and numbing frustration. It seems to work best for those people, especially men, who find things falling apart but who really have little life experience with failure or loss of confidence. This is all very subjective on my part, but I think of using Hypericum when someone whose circumstances have changed is unable to alter his ways of acting and responding. Such people follow previously reliable responses and strategies, but their life needs new approaches… Hypericum has little or no value in bipolar depression or depressive states with a clear pathology. It is for normal folks whose strategies have failed and who are temporarily adrift. I realize this is an almost impossibly broad description, but you can narrow it down a bit, since there are usually transitory and ill-defined physical symptoms that further define Hypericum as appropriate. Old physical problems or nervous habits may have returned, such as nail biting, breathing problems, sexual dysfunction, constipation, or skin disorders – signs that there are underlying physical frustrations and unresolved nervous agitation as fellow travelers to feeling frustrated… Some will find quick help from the tincture; others will find it takes a week or two to start feeling more focused and alert.”

One thing you’ll notice when you look at the research on St. John’s Wort is that it has almost exclusively focused on people with mild to moderate depression. And until recently, the question still remained: what would St. John’s Wort do for major depression? That question was finally answered just a few months ago with the results of a large trial out of Duke University. And if you were reading the papers or watching the news, you already know what they found: namely, that St. John’s Wort was not effective in this situation. I want to say first of all that this was a good study. I do not believe that it was designed to “make herbal medicine look bad,” like some people allege. Rather, it was designed to test the limits of an herbal medicine, and it did so. I will say, however, that the media coverage of the study was pretty bad. Big banner headlines screaming “Herbal Medicine Found Ineffective.” That kind of thing. To clarify, its ineffectiveness against major depression does nothing to negate its efficacy in cases of mild to moderate depression. And secondly, the study compared St. John’s Wort to Zoloft, the world’s number-one-selling antidepressant, and found that neither of them worked in the situation! But you had to get past the headlines and into the small print to get that aspect of the story…

Although it doesn’t appear to have the side effects of traditional MAO inhibitors, it still would be wise to avoid using it in those situations where MAOI’s are contraindicated. Check with your pharmacist. There are reports that St. John’s Wort may increase sensitivity to sunlight, allowing people to sunburn a lot easier. Long story, but the bottom line is this: if it happens at all, it is quite, quite rare. St. John’s Wort might also interfere with AIDS drugs. And if we’re on the subject of side effects, I should mention the positive ones as well. First of all, it has been clearly documented that St. John’s Wort increases the rate of wound healing in lab rats. There’s also some indication the St. John’s Wort is anti-viral. Traditionally, St. John’s Wort has been used to lessen nerve pain. A St. John’s Wort oil for topical use is quite useful for healing burns and other forms of skin damage.

A word about standardization. Herbs are complex medicines. Each one is composed of hundreds of different naturally-occurring chemicals which exist in varying amounts from plant to plant, batch to batch. While this complexity is part of what makes herbs special, it can be frustrating for researchers, manufacturers, and consumers who want to know exactly what they’re getting. Standardized extracts address this issue by guaranteeing precise levels of specific constituents. But because herbs are so complex, we don’t always know which constituents are the most important. For years, St. John’s Wort products were standardized for a chemical called Hypericin. And these products seemed to work well enough. But in the last few years, people have begun to pay attention to another marker compound called Hyperforin. It appears now that products standardized for Hyperforin work better than those standardized for Hypericin. A number of companies are even making products standardized for both 0.3% Hypericin and 4% Hyperforin. I’d look for one of those. The standard dose is 300 mg, three times a day. Most people notice results in a few weeks.

Beyond St. John’s Wort, there are literally dozens of herbs which can be useful for depression, but the others seem to work indirectly. Some can be calming and some can be energizing. Others help to ease anxiety. Still others work by improving mental function in general, which is often the key with older folks as they start to lose some of their abilities. Some herbs, like the Ginsengs, Ashwaganda, and Reishi Mushroom, help the body adapt to stress in general. I’d pay special attention to Kava for anxiety, and Passionflower to help wind you down if you get wound up. The list could go on and on. It’s pretty arbitrary of me to pick these two. But that’s how much space I have.

Let me lead off with a quote from the great Simon Mills:

Olfaction [the sense of smell] is thus not only the most primitive of all the senses, it has the most direct line to the higher centres; in short, olfaction is the ability of an animal to feel its environment directly. Even in the human, the direct access to our deepest consciousness remains intact, and it is the case that a scent can still move directly, deeply, in a way that owes nothing to rationalization or conceptualization. The most direct of senses is still associated with that part of consciousness that provides the ability to make immediate experience meaningful.

-from Out of the Earth

I am not an expert on aromatherapy, not even close. One thing I do know about aromatherapy, however, is that it is a very personal experience. No matter what experts say, choose an essential oil that resonates with you. That’s why there are open bottles (“testers”) for you to try. Nevertheless, there are some essential oils which are often recommended. Rose, especially for depression accompanied by grief; Lavender: the most universally attractive and soothing of the oils, an all-purpose scent; Neroli, or orange blossom, for it’s ability to soothe while it strengthens; Jasmine, which is uplifting and sometimes even euphoric; the citrus oils, like lemon and grapefruit and orange, for their brightness and clarity. We also have books to help guide you in your explorations. Use the oils in a diffuser, or dilute in an elegant carrier oil like sweet almond or jojoba, and apply to the wrists, temples, etc. Or use for massage. You can even add a few drops to a warm bath.

1. I absolutely love the fact that placebos are so effective! They really are the best medicine! And I think we can learn an important lesson from this. If you go into any medical treatment with a positive attitude – especially when you’re dealing with depression – you’re likely to get better results out of it.