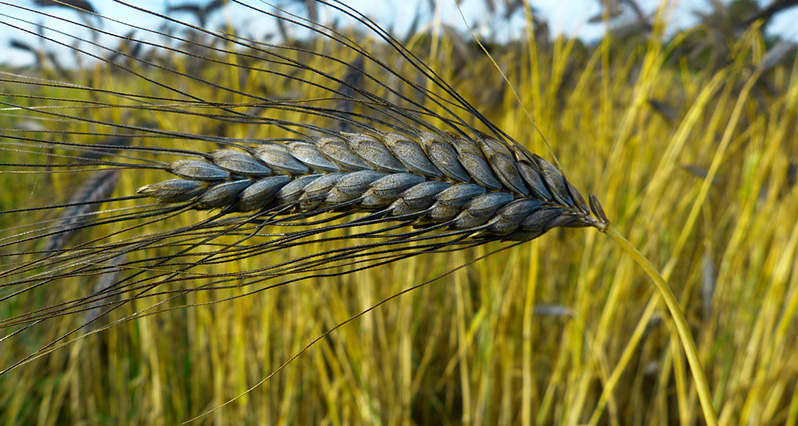 Emmer Farro is said to be the first cultivated grain, farro, a hard wheat from the Fertile Crescent in Western Asia, has 20% more protein than modern wheat and seems to cause fewer allergies too. Its insoluble fiber feeds the friendly bacteria in our gut. If you want to cook farro plain, cook it in lots of water like pasta, drain excess water after 50 minutes. It stays al dente. Use hot or cold; risotto-style; in salads or soups.

And amaranth? Grown by the Aztecs and then virtually eliminated in the Spanish conquest, amaranth is tall and bushy with flowers that contain about 60,000 seeds each! Like its relative quinoa, amaranth is gluten free. Its seeds have, according to the USDA, a third more protein than rice, sorghum and rye.

Serves 8 (use organic ingredients, of course!)

Bring water to a boil. Stir in farro and amaranth. Lower heat, cover pot, and simmer for 50 minutes, or until water is absorbed (look for the air holes – you’ve seen this on our cooking show, Eat Well Be Happy). Let grain rest while you prepare the rest.

In a large skillet, gently warm EVOO. Sauté onions and garlic. Add diced tomatoes (a little juice is fine), olives, cherries and spices. Cover skillet and simmer on low for 5 minutes. Fold in the cooked farro and amaranth (I like to use a rubber spatula or metal spoon). Taste, adjust seasoning and when dish is ready, add parsley.

Did you know Amaranth is 8,000 years old? Montezuma received bushels each year as people paid him homage. Along came Cortez, who burned the fields because amaranth featured so prominently in Aztec culture and religion. One of 20 foods the National Academy of Sciences says should be reintroduced.