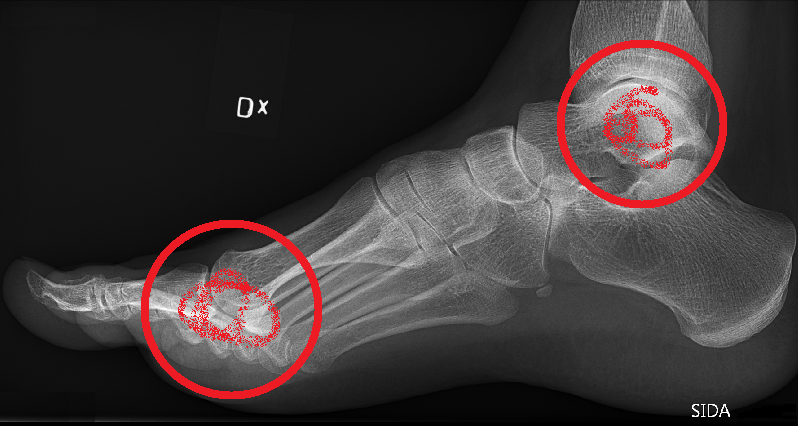 Osteoarthritis (OA) is pretty simple. Basically, there’s wear-and-tear on our joints, which is balanced by certain maintenance processes. As long as maintenance can keep up with the wear-and-tear, we’re fine. But as we get older, maintenance slows down while wear-and-tear doesn’t. So the joint starts to erode. This is when OA starts. Younger people can also get OA if they put an unusual stress on their joints. This is a problem for certain athletes, especially power lifters. (Please note: it isn’t your bones which are eroding in OA, but the cartilage which cushions the ends of the bones. Osteoarthritis needs to be treated differently than osteoporosis!)

NSAIDs (non-steroidal anti-inflammatory drugs), like aspirin, ibuprofen, Vioxx, and Celebrex are the standard “quick fixes” for arthritis. They are obviously quite effective at reducing joint pain. But while they cut back on the pain, they do nothing to stop the continued deterioration of the joint. In fact, some studies have shown that NSAIDs actually speed the rate of joint deterioration! I personally think that NSAIDs do have their role, but that role should be limited to special occasions. Just hiked Mount Monadnock? Take some NSAIDs. But for the day-to-day maintenance of arthritic joints, there are so many better options.

Let me mention first of all that being overweight only makes things worse.

Beyond weight control, the number one natural treatment for osteoarthritis is the supplement glucosamine. I don’t even know where to start on the glucosamine research, there’s so much of it, and so much of it is so good. Glucosamine consistently beats a placebo pill, and holds its own against the NSAIDs, too. For just one example, a review published last March in the British Journal of Community Nursing compared 1.5 g of glucosamine a day to 1.2 g of ibuprofen in 218 people. Their conclusion?

The results of these studies showed glucosamine to be of similar efficacy to ibuprofen. The conclusion is that glucosamine is effective in relieving joint pain associated with osteoarthritis.

In other words, glucosamine can hold its own with some of the best that pharmaceutical medicine has to offer, the big difference being that glucosamine has much fewer side effects. Actually, that’s not the only big difference. The other difference is in how the glucosamine actually works.

It really is beyond a doubt that glucosamine flat-out works for OA, that it decreases pain and stiffness of the joints. But how does it work? Does it just kill pain, like the NSAIDs, or is it actually getting to the root of the problem? Well, in January 2001, the Lancet (Britain’s most prestigious medical journal) published a three year trial where glucosamine didn’t just kill pain, but significantly reduced joint deterioration as measured by X-ray. This study finally proved what the test tube research had hinted at all along: while glucosamine does have some minor anti-inflammatory properties, what in mainly does is help rebuild joint cartilage! That’s why it’ll often take 2-8 weeks to start working – repair takes time after all – but by the same token, most people can skip a day or two without being back in instant pain.

Glucosamine is quite safe, with a few rare exceptions. Since it comes from shellfish shells, you can not take it if you have a shellfish allergy. Also, glucosamine can occasionally cause an upset stomach. Try taking it with food and in divided doses if this is the case. Finally, there is some test tube evidence which hints, just hints, that glucosamine may not be suitable for people who are fighting a major, life-or-death battle with their immune systems. I don’t want to get into it too deeply here. Just bear in mind, this is only test tube evidence; there have been thousands of real, live people in the glucosamine studies, and they haven’t come up with any immune system problems. But these studies didn’t include cancer patients, people with HIV/AIDS, etc. If you are dealing with these, or similar conditions, you’ll want to discuss using glucosamine with your qualified healthcare provider.

Lastly, I should comment on the different types of glucosamine available. Most of the original research was done using glucosamine sulfate. However, another compound, glucosamine HCl, is showing up a lot these days. Trust me: it shouldn’t make any difference which one you choose. A third form, N-acetyl glucosamine, may also be useful, although it is more often touted for repairing connective tissue in the gut wall than the joints.

Chondroitin sulfate is another supplement which can be used for OA, and which is frequently combined with glucosamine. Chondroitin works similarly to glucosamine, except it’s a much bigger molecule, so big in fact that some people have a hard time absorbing it. This doesn’t mean that chondroitin won’t help you, just that it isn’t quite as consistent as the glucosamine. The only chondroitin I’ve ever seen is bovine-derived, which means it comes from cow. Nothing wrong with that from a health perspective, but vegetarians might want to avoid it.

MSM (or methylsulfonylmethane) is a source of the mineral sulfur, a basic building block of connective tissue including joint cartilage. In a sense, sulfur is what holds the glucosamine and chondroitin in place. (Please note: sulfur is not be confused with “sulfa”-class drugs, which many people are allergic to). MSM hasn’t been nearly as well-researched as glucosamine, but the few studies out there indicate it can be helpful. In my experience, glucosamine seems to have the more consistent success rate, whereas MSM is more hit-or-miss. That being said, the people for whom MSM works tend to notice results much more quickly. There’s no standard dose with MSM. I’d aim for somewhere in the 1-5,000 mg range. (And I don’t want to make any promises here, but some people report that it softens the skin and helps with rashes; others that they actually snore less when they take it!)

SAMe (pronounced “sammy”; it stands for s-adenosyl l-methionine) is perhaps the best bet for an osteoarthritis quick fix. In May 2002, The Journal of Family Practice analyzed the data from 11 published trials on SAMe. This is what they had to say: “SAMe appears to be as effective as NSAIDs in reducing pain and improving functional limitation in patients with OA without the adverse effects often associated with NSAID therapies.” SAMe is great! It’s quite good for the liver, and indirectly, for the heart (it lowers homocysteine levels). It may prevent age-related cognitive decline and decrease cancer risk. And it’s also probably the best antidepressant we have. So why aren’t you taking it? Well, the major drawback is cost. Most people with OA will want to take at least 400 mg a day, usually more. And that does get to be pricey…

For all of you who complain you don’t want to swallow so many pills, have no fear, there is a simple, painless, relatively inexpensive alternative. And that alternative is: Leeches! One small study published in Alternative Therapies in Health and Medicine (Sept.-Oct., 2002) showed that four leeches applied around the knee joint can greatly improve pain and stiffness. Not only were the results quick (within 10 days), but they were sustained for four weeks after the leeches were removed! No kidding! (But where do you buy leeches?)

For those of you who complain that you don’t want to swallow so many pills, and you don’t like leeches, there is a wealth of more traditional topical products. Perhaps my favorite is the glucosamine/chondroitin/MSM cream put out by the Nature’s Plus Company. I’m actually a little surprised at how much people seem to like it. And it comes with a money-back guarantee to boot. Arnica, both orally and topically, is another option. Most people think of arnica as something to use after an injury, on bruises and sprains and such. But more and more people seem to be using it for osteoarthritis, mostly with good results. Finally, there are the capsaicin creams. Capsaicin is what makes cayenne peppers “hot,” and applying it topically can deaden the feeling of pain in, and bring added circulation to a troublesome joint.

Regular exercise can be helpful in osteoarthritis. One study, published in The British Medical Journal (October, 2002), followed 786 people with osteoarthritis of the knee, randomized to either perform half-an-hour a day’s worth of exercises to strengthen the muscles around the knee joint, or not. At every step along the way, at 6, 12, 18, and 24 months, the patients doing the exercises consistently reported less knee pain than those who didn’t. The average improvement in knee pain was only about 12%. But, like the glucosamine, exercise should actually prevent joint deterioration, not just kill pain.

Finally, I want to address magnets. There’s a whole lot of hype surrounding magnets, and a disproportionately small amount of research to back that hype up. While there are a few small studies which hint that they might work, I was unable to find any reputable study which showed real strong results. More than that, our experience with magnets here in the store has been less than spectacular. And then, every once in a while, somebody comes in swearing they’re the greatest thing since sliced bread. I don’t know what to tell you. No reason not to try them, I guess, but I’d probably try something else first.