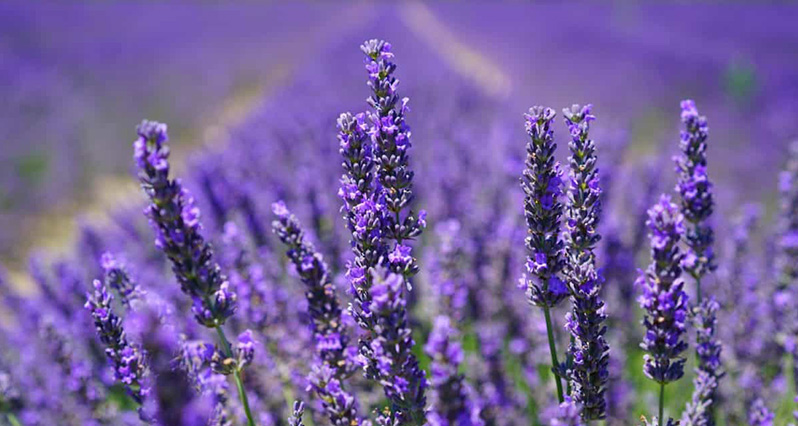 the scent of lavender is one of the most recognizable.

Members of a tribe in New Guinea say good bye by putting a hand in each other’s armpit then rubbing themselves with it, coating themselves with the other’s scent. Similarly, in Elizabethan times a peeled apple was kept in a woman’s armpit until it absorbed her odor, then given to her lover as a “love apple” so he could inhale her fragrance while they were apart. It is reported that Napoleon sent a message to Josephine, “Home in three days, don’t wash.”

Smell is our most primitive sense and directly accesses the hypothalamus, the gland which controls neuro-chemical and hormonal functions of the body. Smell can trigger memories, emotion, creativity, and can help heal. This science of smell and how it affects us is called “aromatherapy” which uses essential oils distilled or extracted from flowers, trees, bushes and herbs.

It was the Egyptians who are generally recognized as the founders of aromatherapy. The Persians and ancient Arabs followed the recommendations of Hippocrates and used aromatic oils to purify the air and protect themselves from disease. In mediaeval Europe, plants like lavender, thyme and chamomile were used in meeting places and churches because when strewn underfoot and stepped on, they gave off scents, which had insecticidal and bactericidal properties, which helped counter the spread of infectious illness. They also deterred lice and fleas.

During the bubonic plague, grave robbers protected themselves by using a potion with garlic, rosemary, camphor, lavender, nutmeg, sage and cinnamon suspended in vinegar. In the 1930’s French chemist, Rene M. Gattefosse, plunged his burned hand into a vat of lavender oil. The healing and calming effect this had gave birth in his studies to modern aromatherapy. Today in Europe, aromatherapy is respected and used with other healing modalities because it helps the body heal itself on an emotional and physical level.   The correct scent has been found to boost immunity, lower blood pressure, stimulate digestion and release endorphins (feel-good chemicals in the brain).

Ancient writings tell us that cinnamon was sprinkled on beds before lovemaking. More recently, cinnamon has been shown to be an aphrodisiac for men. What’s old is new, what’s new is simply discovering the old.

If you want to try aromatherapy, start with oils whose scent you like. Read about that oil and you’ll be surprised to find out that you like what you need. You like what makes you feel good, what helps you achieve a goal or get through the day. For instance, clary sage calms, soothes, reestablishes equilibrium, and may induce a sense of euphoria. It relives mental fatigue and releases muscles. Bergamot is said to uplift and have a stabilizing effect on the emotions. It is said to feel like a ray of sunshine coming into one’s life. Jasmine is a heavenly fragrance said to instill confidence and inspire joy. Traditionally used as an aphrodisiac, jasmine is said to make one feel beautiful from within. This “king” of oils opens the heart and relaxes. Iris dissolves mental or emotional blocks and heals inner hurts while Narcissus which inspires creativity and self-discovery, is used to counter grief, trauma and anger. Some of these oils are more exotic. Everyone knows that Eucalyptus opens the sinuses and is appreciated when everyone is fighting a cold, that Lemon or Orange or Peppermint make you feel more alert, lively and cheery. Lemon is used in some Japanese factories because it reportedly decreases sick days and increases productivity. That