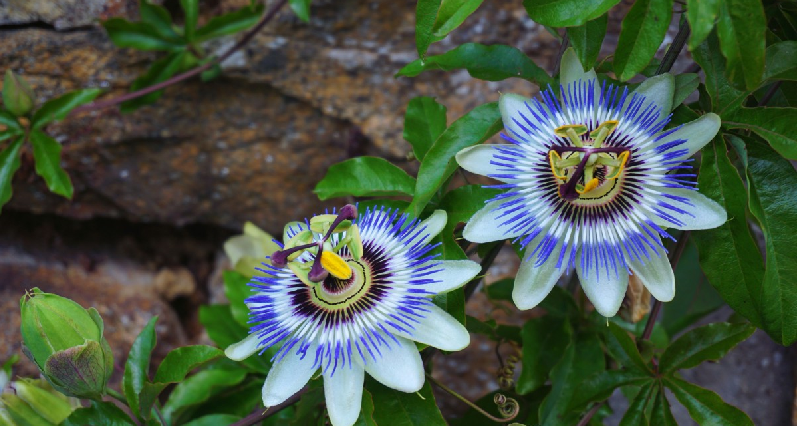 A photograph of passionflower. Don’t let the name fool you. This herb is not for “passion,” but for anxiety, tension, and agitation. The name “passionflower” comes from the conquistadors who saw a lot of symbology in the shape of the flower (crown of thorns, etc.) that reminded them of Jesus.

Last month’s newsletter talked a bit about anxiety and panic, touching briefly on the differences between the two.  It also included a fair amount of talk about “lifestyle” factors – those indirect but very real contributors to anxiety and panic.  Much of the article was drawn from an interview with Janet Beaty, a local naturopathic doctor.

Before I start Part II, I want to correct three errors and/or oversights from last month’s piece.  First, I spelled Dr. Beaty’s name wrong (Sorry, Janet!  And if anyone wants to contact Janet for a professional appointment, her office number is 978-287-5352).  I mistakenly listed a dose of chromium in milligrams (mg), when it should have been in micrograms (mcg).  And I completely forgot to mention hyperthyroid-ism as a potential cause of anxiety and/or panic.  The thyroid gland is the master gland of metabolism, and when it starts working too hard, speeding you up too much, it can create severe anxiety.  In fact, a close friend of mine was once institutionalized for two weeks with crippling panic and delusions before the docs figured out an overactive thyroid was causing it.  With a combination of medication and supplements now, she’s completely fine.  None of the medications and supplements she’s taking deal directly with anxiety.  They deal, rather, with the underlying cause.  But they work.

The larger point is that, if you suffer from serious anxiety or panic, especially if it’s something new in your life, please have yourself checked out by a medical professional who can rule out underlying causes – hyperthyroid or otherwise.  This identifying and treating underlying causes, Dr. Beaty points out, is a real strengths of naturopathic medicine.

That being said, this month’s article will talk about ways to deal directly with anxiety and panic.

One up-and-coming supplement is the amino acid l-theanine, which is found in green tea.  Many people who say coffee gives them the jitters don’t have a problem with green tea, even though it also contains caffeine.  That’s because theanine counteracts the effects of caffeine.  In fact, when rats were given theanine along with caffeine, it completely negated the negative effects of the caffeine!

Theanine can be calming independent of caffeine.  In one study, women aged 18-22, were given 50-200 mg of theanine or a placebo.  Within 30 minutes, a brain scan showed increased alpha waves (associated with an “awake, alert, and relaxed” state of mind).  The women also reported feeling more relaxed.  I think of theanine for people who can’t contain their energy.  My friend, who owns another health food store, and who tends to get a little hyper with the stress of his job, says a combination of 200 mg theanine and 500 mg GABA (see below) works for him.

Anxiety aside, theanine is good for you anyways.  Research shows it protects rats and gerbils from damaging effects of strokes, protects them against liver cancer, and helps fat mice lose weight.

GABA (or gamma-amino butyric acid) is another anti-stress, anti-anxiety amino acid.  GABA is a naturally-occurring neurotransmitter in the brain, where it dampens the excitability of brain cells.  I’ve always considered it as a “quiet-the-mind” supplement, to slow down incessant mental chatter.  In fact, I took this one myself years ago at Grace’s recommendation, when something I couldn’t stop thinking about kept me from sleeping.  It worked great.

Dr. Beaty has a slightly different take on this supplement, which she also recommends in her clinic.  She recommends it for people “with chronic muscle tension… people who are tight.”

The herb lemon balm (Melissa officanalis) is another option.  From what I’d read, I thought of lemon balm more for calming hyperactive kids and as an antiviral in herpes.  Dr. Beaty, however, says she uses lemon balm a lot for simple anxiety, and that she sees it work.  It’s quite safe (except it can make some anxiety drugs stronger and might be a problem in pregnancy).  Lemon balm can be taken in pill form, as a liquid extract, or as a pleasant tea.

A few herbs I don’t have space to cover, but worth looking into on your own are: passionflower (Passiflora incarnata), especially for anxiety related to blood pressure that gets high due to stress, then stays high into the evening.  Motherwort (Leonorus cardiaca), for anxiety associated with increased heart rate.  Holy basil (Ocimium sanctum), new to this country, but people tell us the supplement works and the tea, with its pleasant, green flavor, is calming.  Three or four cups of the tea a day, hot or iced, may be enjoyed.  True brahmi (Bacopa monnieri) is a personal favorite.  Long used in India as a calmative, most of the modern research has focused rather on ‘attention’, where it seems to help after taking a month or so.  I think of Bacopa, where one is constantly distracted by anxiety, or for anxiety that roils through the digestive system, leaving your gut crampy or spastic (think IBS).

Crossing the fine line from anxiety into panic, the nutrient inositol can be amazing.  It is absolutely safe, relatively inexpensive and tastes like sugar.  It’s found in every cell of our bodies.  But what does it do?  How does it work?

Inositol is part of a number of second messenger systems.  Let me explain.  Neurotransmitters are chemicals that regulate mood, and affect the behavior of the brain.  They do this by sending messages to brain cells.  However, they only deliver their messages to the outsides of cells; a “second messenger” is needed to carry that message inside.  Inositol is a crucial part of second-messenger systems for practically every neurotransmitter known.  In a sense, we can say that inositol helps the brain manage itself better.

Well, that’s fine for theory – but does it actually work?  In one study, people with panic attacks received either 12 grams of inositol a day or a placebo.  At the start of the study, everyone averaged 10 panic attacks per week.  Four weeks later, those taking inositol went down to about 3 attacks per week.  (The placebo group went down to 6).  In another trial, inositol was compared to fluvoxamine (an antidepressant drug used to treat panic disorders).  Here, inositol was found to be more effective than fluvoxamine in reducing the number of panic attacks.

There’s also good research on obsessive-compulsive disorder, with a significant improvement at 18 grams a day in 6 weeks.  I know two customers who have done quite well on inositol.  Another study found it effective in anxiety-driven bulimia and binge eating.  There’s good research on depression, too.

If you want to try inositol, you’re going to want to buy it in powder form.  While a standard dose is less than 2 tablespoons of this sweet powder, that’s equal to more than 20 pills.  While it’s not unheard of for people to get slightly stomach-achey or gassy while taking it, those appear to be the only side effects.

There’s good ol’ Rescue Remedy, a flower essence blend from the Bach Company.  Flower essences are a form of homeopathy that involves soaking flowers in water for an hour or two.  In the end, what you’re left with is basically… water.  I can’t explain it, but Rescue Remedy just seems to work.  People take it during situations that “freak them out,” and even give it to animals when they’re spooked.  While I tend to have a prejudice against homeopathy – herbs and nutraceuticals are more consistent and easier to understand – this one is worth a try.  If it does work, it works in a minute or so.  Even the quickest herbs may take 5-10 minutes, even longer with food in your stomach.  (Debra, however, was brought up on homeopathy and says when it works, it works, even if hard to understand!)

Finally, it’s worth looking at vitamin B-6.  B-6 is needed to make all our major neurotransmitters.  A less-than-optimal level, then, can interfere with our brain’s ability to regulate.  While there is no research specifically with anxiety, there is with PMS, where it can be quite helpful.  What I suggest to people with any sort of mood disorder is to take B-6 if they don’t remember their dreams (this can often indicate low B-6 levels).  See if it makes a difference.

[Note from 2018: the following paragraph is embarrassing, and should probably be removed.  But I’m leaving it in for posterity’s sake].

And while I would love to write about B-vites Niacin and Niacinamide, I can’t.  The paper I wanted to quote from was in the recent issue of The Townsend Letter for Doctors and Patients.  But somebody took my copy!  I’ll make sure to get a replacement before this newsletter comes out, if you want to come in and read it.  In the article, the president of the Canadian College of Naturopathic Medicine discussed how he used these in his clinic.  He said that they were the single most effective approach he used.  And he gave instruction on how to use them.