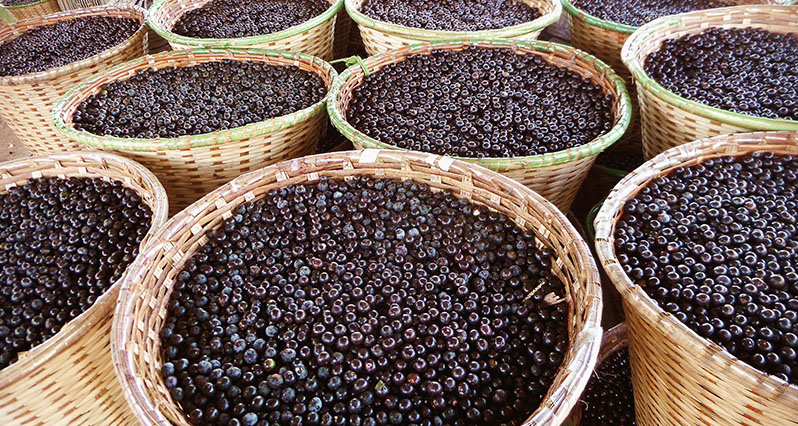 Okay, so here’s the deal: there’s this berry called the açaí berry, it grows on palm trees in the Amazon basin, and if somebody hasn’t already tried to convince you that it’ll help you melt away the pounds, cleanse your colon, energize you, and/or supercharge your sex life, you probably haven’t turned on your television, opened your e-mail, or even glanced at a newspaper in the last six months.

So does it actually do all that?  Uh… no.

But isn’t it some sort of a super-duper antioxidant?  Practically everyone hyping açaí cites the same alleged “research” where açaí outscores every other fruit tested on the ORAC scale, a common measure of a food’s antioxidant capabilities.  But I don’t trust it.  First of all, I’ve never seen this research published in a legitimate scientific journal.  Secondly, it compares freeze-dried açaí (concentrated) to fresh fruits (mostly water weight).  And finally, the other fruits listed for comparison score suspiciously low, much lower than they do when the data come from reputable labs, like the ones run by the USDA.

And the thing is, there actually is credible published ORAC data on açaí!  You just don’t hear about it from the people who’re trying to sell you the stuff.  In the study I saw, various juices were ranked according to their ORAC values.  The researchers tested three brands of each type of juice, and then averaged the values.  The rankings (from lowest to highest) went: apple, orange, cranberry, açaí, black cherry, blueberry, Concord grape, red wine, and pomegranate.  Beating cranberry ain’t bad, but it doesn’t make you a “superfruit.”

But why do people say it will help me detoxify and lose weight?  Because people will say anything, in order to sell you stuff.  (Although to be fair, some of them might even believe what they’re saying).

But don’t antioxidants help me lose weight?  No, they do not.

The theory that antioxidants will help you lose weight was popularized by a dermatologist named Nicholas Perricone.  Perricone points out that weight gain is linked to inflammation, and inflammation is linked to oxidation.  So he put two and two together and got twenty-two.  He wrote a whole book about how antioxidants, and an anti-inflammatory diet, will help you lose weight.  It’s a fun theory.  But there’s no evidence to support it.  And when you think of all the long-term trials with antioxidants, for heart disease, cancer, Alzheimer’s, etc., you’d think that weight loss would’ve shown up as a side effect somewhere if it were legit.

But what about all those açaí products that claim they’ll detoxify me and cleanse my colon?  All the ones that I’ve seen contain more than just açaí, including a good solid dose of laxative herbs.  While a short course of laxatives can be useful as part of a cleansing or detoxification protocol, using them to lose weight is basically an eating disorder, like Bulimia.

But doesn’t açaí have the healthy fats that are in fish oil?  No, it does not.  Although it does have other kinds of healthy fats.  That being said, you’re not getting them in the juice, capsules, or powder.  Look at the label there are zero grams fat.

But doesn’t açaí have essential amino acids?  Look at the label.  See how many grams of protein are in there?  That’s how much amino acids you’re getting.  Now compare it to cup of yogurt, say, or an egg.  It’s a lot less, isn’t it?

But wasn’t açaí on Fox News, CBS, and NBC?  Yes, it was.  Then again, so was Rush Limbaugh.

But isn’t there all sorts of research?  As of June 13, there were 55 papers on PubMed that dealt with “acai.”  About 20 of them related to the American College of Allergy and Immunology.  The rest weren’t very impressive.  To give you an idea, let’s take a look at the five papers published on açaí in 2009.  We have:

Going through all 55 papers, I couldn’t find a single one that was in any way a compelling endorsement of açaí for any health condition.  Just a bunch that say açaí is a decent antioxidant, and that it has healthy polyphenols.  Well, you know what?  So does chocolate.  In fact the only study that even hints that açaí does anything special found that it dilated abdominal blood vessels in vivisected rats, a result of questionable relevance to human health and nutrition.  Or, really, the health and nutrition of anything.  Besides, that study used the seed of the açaí, not the fruit.

But I don’t care about science it’s all sponsored by the fascist military-industrial-pharmaceutical complex, anyways!  What matters to me is the shamanic healing wisdom of the indigenous peoples of the Amazon basin.  Don’t they use açaí for, like, everything down there?  Actually, they mostly use it for breakfast.  Sort of like we use grapefruit.

Do we sell it? Sure we sell it.  We were selling açaí for years before it was ‘discovered,’ and we’re not going to stop selling it now because people have started making all sorts of outlandish claims.  Our companies practice ethical marketing, which means that none of them are claiming anything for their açaí other than what’s true.  It is a good antioxidant.  It has been important to the indigenous peoples of the Amazon basin.  And it will do you some good.   I’ve even taken it myself, when somebody’s given me a free sample.  And who knows?  Maybe my colon got cleaner, and I didn’t even notice.