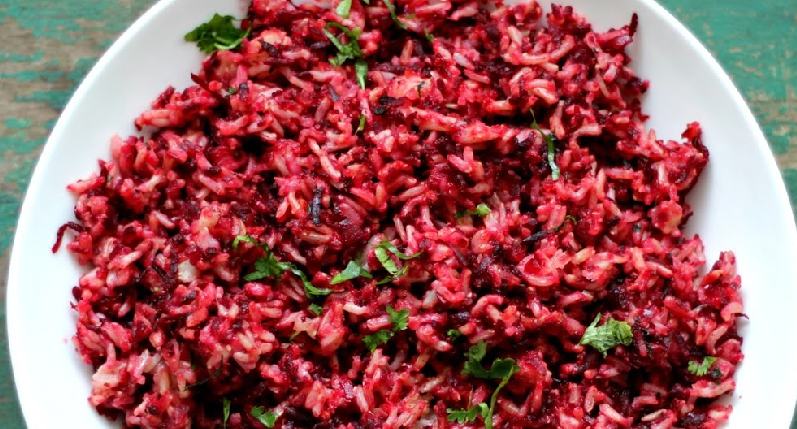 I’ve always loved the cookbook, Please to the Table, by Anya von Bremzen and John Welchman, and this recipe is my adaptation of Anya’s favorite pilaf. Among my own touches, I’ve added my mother’s addition to all her rice dishes, Fearn soy granules. Mom always stirred in a few spoonfuls of Fearn soy granules to her pot of rice during the last 5 minutes of cooking. The soy granules absorbed remaining moisture so the rice was dry, the grains separate. One-quarter cup Fearn soy granules added 22 grams of protein, a good thing, and made the rice look and taste very gourmet, or so friends and family always said!

Fearn soya granules are named after Charles E. Fearn, a British physician in the English Royal Army Medical Corps, who was summoned by President Wilson to the US in 1917 to develop a soybean industry here as part of our war effort. Dr. Fearn was granted US citizenship by Act of Congress, and after the war turned his attention to promoting the soybean. The Fearn Company was founded here in the US in the 1930’s. Today, they confirm that their soy granules are non-gmo.

Today, I’ve used “Organic Volcano Rice” from our bulk bins brought to us by Lotus Foods. From West Java, this rice is a prized blend of ancient brown and red rices. It’s grown with a system that uses less water than normally is used, and less land (you’ll love the flavor!) The orange zest adds something special.

Gently warm butter, ghee or extra virgin olive oil in a heavy 2-quart saucepan with a tight-fitting lid. Add carrots or beets (beets, if you choose them, will make your rice psychedelic pink!) and stir over medium heat a couple of minutes. Using a microplane, zest the orange into the pot, then add the sunflower seeds and golden raisins (yes, you can replace these with regular raisins or chopped dried apricots). Using the same microplane, grate in unpeeled turmeric and ginger. Add rice, give a good stir, and then slowly pour in the boiling water. Add salt. Bring pilaf to a boil, turn down heat to lowest. Cover pot and simmer 40 minutes. Gently stir in soy granules, cover pot and simmer the last 5 minutes.