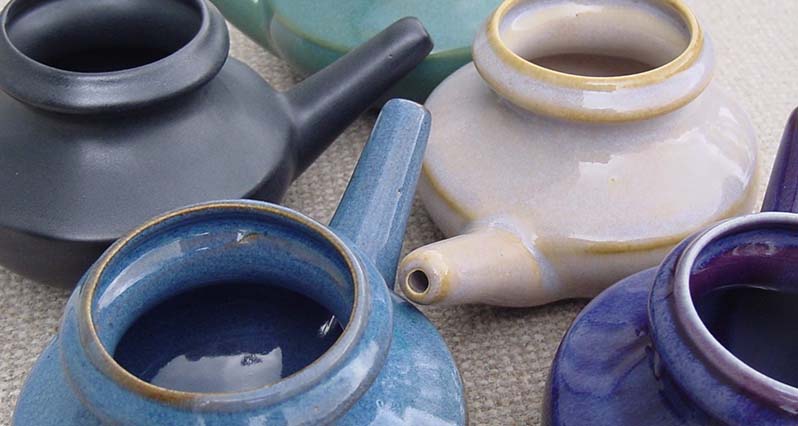 A neti pot is like a teakettle you fill with salt water, and then stick the spout up your nose. And when I say that, people think I’m joking. Seriously: salt water goes in one nostril, and comes out the other.

Ideally, one does not do this at the dinner table.

Using a neti pot may seem like a fad, but it’s certainly not a newfangled one. The practice of jala neti (literally “cleansing water”) has been around in India for thousands of years. Even in this country, in just a decade, it’s gone from an almost unheard-of, cultic practice; to an underground phenomenon; to a mainstream public health measure, the subject of numerous clinical trials. Neti pots have gained so much traction in popular culture that the New York Times referenced them in its “New Slang Terms of 2007” review. (The term, incidentally, was “nose bidet.”)

Well, popularity can be fleeting, and research can be fickle, and what’s touted today can be forgotten, debunked, or disavowed tomorrow. The neti pot, however, looks like it’s here to stay. Unlike other “newest” things hyped by pyramid marketing, spam e-mails, and the discerning medical minds on the Oprah show, neti pots have stood the test of time – and the test of research (more about that in a bit).

So what will a neti pot do for you? Well, used as needed, jala neti helps with sinus problems, mostly the congestion that can accompany seasonal allergies and infections.  It reduces reduce secondary symptoms of sinus problems – sore throats, snoring, post-nasal drip, sinus headaches, etc. Used over time, as a daily hygiene practice (like brushing your teeth), it also reduces the risk of catching a cold.

The standard filling for a neti pot is simple: plain salt and cool water. That being said, getting the proportions of salt to water right is very important.

The starting point for most people is called “physiologic saline,” water with the same salt concentration as human blood. You can buy bottled physiological saline, or you can make it yourself by adding a teaspoon of fine salt to three cups water. You might not get the exact, precise salt concentration (0.91% w/v) needed for an IV. But it’ll be close enough for sticking up your nose.

Why is salt concentration so important? Because salt is drawn to water, and water is drawn to salt. As any cook knows, if you put salt on something moist – say, a piece of vegetable or meat – the salt pulls the moisture out, drying and eventually shriveling it up.  On the other hand, if you put heavily salted food in contact with water, the water will be drawn into the food (towards the salt), plumping and swelling it .

Now, as I said, your blood and tissues are a little salty. If you were to put pure water (without salt) up your nose, the water would be drawn towards the salt inside your tissues, and your membranes would get waterlogged and swollen.  On the other hand, if the water were too salty, moisture would be pulled out of your tissues towards the salt in the neti wash, dehydrating your membranes.  Physiologic saline, on the other hand, is “just right” – it shouldn’t effect your tissues one way or the other..

A neti pot, used correctly, has the potential to reduce all sinus and nasal symptoms of cold, flu, and allergy. You can use it as often as you’d like – during really, really bad times, you might use it as often as every hour – but even using it once a day will accomplish plenty. This is especially true for allergies, where you’re washing away the allergens that get stuck in our nasal mucous, triggering the allergic response.

There are over two-dozen good human clinical trials here[1], in a variety of settings, looking at “normal” people with and without diagnosed conditions, on medication or not, people after sinus surgery, and even young children. In almost all of them, jala neti flat-out works. Some of the studies measure efficacy by counting how many times people choose to use standard medication for their sinus problems (they use less when they neti) (yes, “neti” is now a verb).   Others rely on questionnaires where patients fill out how they feel (they feel much better with a neti pot). Still others rely on statistically quantified measures like the Sino-Nasal Outcome Test[2].

Just like some people soak their feet in salt water to reduce swelling at the end of a long day, hypertonic saline will reduce swelling in the nasal and sinus passages. This is not a daily hygiene practice, but rather something you do when you’re feeling stuffy and congested.

You want to keep the salt concentration to double – no more than triple – physiologic saline, as higher concentrations can temporarily stun the cilia (the microscopic “arms” that keep mucous flowing in the right direction) along the airways. You’re also going to want to add ¼-½ teaspoon baking soda for each cup of neti water, which should offset the tendency of higher salt concentrations to sting. (Let me say that again: baking soda, not baking powder).

In a perfect world, you’d use pure distilled water. In the real world, tap water is fine, unless it’s very heavily chlorinated. Get it to room temperature, or even better, body temperature. Cold water won’t kill you, but it will shock you. Hot water… do I really need to point out that boiling water up your nose is a bad idea?

Your choice of salt does matter. First, look for salt that that doesn’t contain any anti-caking additives like silica. Second, try to get salt that doesn’t contain any added iodine. There’s talk that iodine might impair the action of our cilia[3]. I don’t know if it’s true, but why chance it?  (The small amount of naturally-occurring iodine in sea salt appears to be fine). And it appears to be better to use the grey, unrefined “gourmet” salts for their more diverse mineral content.

But don’t stress too much about using special salts. And despite the best efforts of the neti companies to convince me otherwise, I’m still going to tell you that their “Neti salts,” retailing at upwards of $10 a pound, are a ridiculous waste of your money (although for those who want it, we have it). (There are some essential oil-infused salts out there that are worth it).

You can also add a variety of antimicrobial, immune facilitating, and anti-inflammatory herbs to the pot; plus minerals like zinc or silver; or the sugar alcohol or xylitol. Buying a pre-made product can simplify things. We sell a lot of one called “Neti Wash Plus.”  That being said, a half-dozen drops of herbal tincture added to a few cups of neti water is usually safe, as long as you have reasonable understanding of what the herb does. Or put it this way: pretty much anything that’s in a nasal spray can go in a neti pot. (Anyone have any experience using something unusual in your neti pot? Let me know:

And of course, there’s your choice of neti pot to begin with.  A lot of companies are making them right now, and it really just boils down to personal choice, whatever feels best in your hand (sort of like picking a toothbrush).  We have hand-cast ceramic pots from Red Hot Ceramics in California, and Coryell Clayworks in Maine.  We have “eco-plastic” pots from Himalayan Institute, made in China, but by a U.S. based company operating as a non-profit.  Whatever you try, bear in mind: once it goes up your nose, we can’t take it as a return.   Thanks for understanding, and happy neti-ing!

[1] To people who insist on placebo-controlled research, all I can say is: sorry. There’s no feasible placebo – no way to give half the people something that they only think they’re sticking up their noses. Jala neti is forever destined to remain an “unproven” treatment like diet, exercise, weight control and stress reduction.

[3] So here’s a piece of trivia for you. Ever wonder why your nose runs like a faucet for a minute or two after coming in from the freezing cold? It’s your cilia. They freeze up and stop working when they’re very cold. When you’re actually in the cold, it’s not a problem, since your mucous freezes as well. When you come in, however, your mucous unfreezes before your cilia do. Drip, drip.