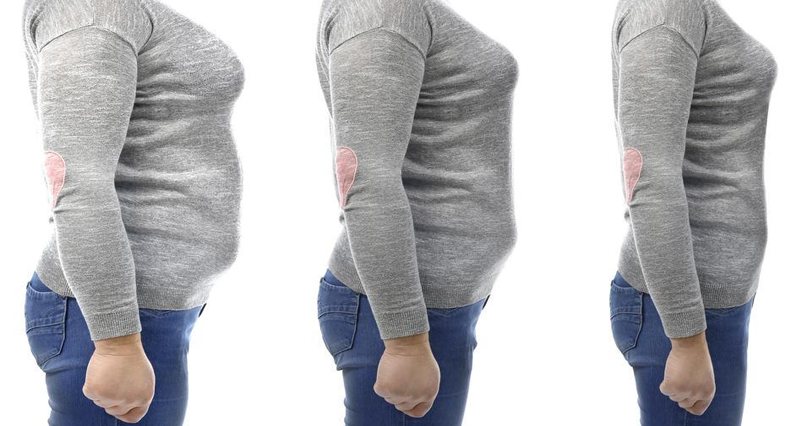 This is an article on weight loss.  I last covered the topic for the May, 2001 newsletter.  Yet just recently, it has recently been called to my attention that the first article did not entirely solve the problem… That first one was called “It’s May Already, and I’m Still Too Fat For My Bathing Suit!”  I’m going to call this one:

So I was leafing through my old copy of Nutritional Biochemistry, hoping to glean some pearls of wisdom about the subject.  Instead, I came across one of the most medically pompous statements I’ve ever seen.  And I hope it amuses you as much as it amused me: “It is customary for people to self-diagnose obesity, i.e., whether one is underweight or overweight.  A self-diagnosis might be expected to be inaccurate because the measurement of body fat requires special tools.”

Would one of those tools be a scale?  A tape measure?  A mirror, perhaps?

But it got me to thinking, have we really gotten to the point that we need medical experts to tell us if we’re overweight?  Are we so cowed by credentialed expertise now, that we’re afraid to make even “no-brainer” decisions concerning our own health?

Everything I read is always trying to get me excited about the next big thing.  For a while it was Hoodia extract (Oprah likes it!), then it was something called Banaba leaf (no, I’m not spelling “banana” wrong), now it’s something called Cha de Bugre (and how do you pronounce that last word, anyways?), and pretty soon it’s going to be something else, from some other distant swamp or desert.

But let’s put aside the hype for a moment.  Let’s look at what is proven to work.

Fiber works.  And fiber is good for you.  It reduces the risk of heart disease, cancer, type II diabetes, and lots more as well.

In terms of weight management, fiber fills you up, so you eat less.  Fiber also slows the rate at which food leaves the stomach, so it doesn’t spike your blood sugar as much.

But more than just theory, it’s the results that make fiber look so very, very impressive.  In particular, it’s the research with a kind of fiber called glucomannan, or “Konjac fiber,” that has impressed me.  In one study, for example, overweight women were divided into two groups.  One got a gram of glucomannan to take before each meal.  The other got a placebo.  At the end of two months, the glucomannan group had lost 5.5 pounds, and the placebo group had gained 1.5.  In another two-month study at the same doses, the placebo group lost just under half-a-pound, while the glucomannan group lost more than 8!  And what makes all this so very, very impressive to me is that in neither of these studies were the subjects instructed to diet.

And in other research, glucomannan has been show to help people stick to their diets when they’re trying to.

Any fiber will work here, but what makes glucomannan special is that it will work in low doses, meaning you don’t have to unload 10 or 20 pills at the restaurant.   Two capsules before each meal is all it takes.

And of course this is a no-brainer, but I’m going to say it anyways.  Foods that are high in fiber, not just pills, are also valuable.  Check out the new “Gnu Foods” bars we’re stocking.

2) A Protein Shake For Breakfast.

Perhaps the single most important factor predicting whether someone will keep weight off once they lose it is whether or not they eat breakfast.  Sure, breakfast has calories (and aren’t calories the bad guys here?).  But think of it this way: a small investment in calories for breakfast will keep the body from seeking out and storing a whole lot more calories later in the day.  And I can think of no breakfast better at cutting cravings than a protein shake.

Of course I can’t cite any research proving that my particular recipe for a protein shake is the end-all, be-all of diet breakfasts.  But I swear to you, it does work.

Put it in the blender and blend.

The whole thing clocks in at well under 500 calories less than a cup of granola, without milk  and will stick to your ribs through lunchtime.  The protein supplies a consistent source of energy, and the raw materials to maintain lean body mass (because you don’t want to lose muscle).  And if you get an unhydrolyzed whey (which is the cheaper stuff anyways), you can add immune-stimulating and liver-supporting benefits to the tally.  The fish oil supplies the million-and-one benefits of fish oil (including reduced inflammation and elevated mood), ten pills’ worth in a single tablespoon and if anything, it makes the shake tastier, like the difference between low fat ice cream, and the creamy, full-calorie Real Thing.  The lecithin makes the shake creamier, too, helps the absorption of the fish oil, and may increase the excretion of excess fats and cholesterol through the liver.  The berries supply a massive influx of antioxidants, and a bit of fiber.  And flavor.  I like low-sugar, deeply-colored berries like blueberries or currants.

Of course you can add a bunch more stuff, too, if you want.  I’m a big fan of green powders, basically super-concentrated “salad in a bottle”-type supplements.  They turn my drink brown (because red+blue+green=brown), but they won’t mess with the taste.

Setting aside the nutritional/scientific rationale for a shake, let me tell you a story.  A while back, I was dating a woman with a cookie problem.  There were free cookies at the break room of her office.  This was one of the perks of employment, along with health and dental insurance, and, eventually, non-insulin-dependent diabetes.  Well, we both started doing protein shakes in the morning, not to lose weight, just because it’s a quick and simple and healthy breakfast.  After a week, she turned to me and said “You know, I just realized, I haven’t had a single cookie all week  and I wasn’t even trying not to!”

is a brand name for something the chemists like to call “3-acetyl-7-oxo-dehydroepiandrosterone.”  It’s a hormone originating in the adrenal glands and skin, but primarily works via liver and thyroid.  7-keto DHEA increases the rate at which we burn fats, especially in the

liver (where, not surprisingly, it can also help reduce fatty liver).  Simply put, it raises metabolism without being a stimulant.

Like so much else, it seems, levels of 7-keto DHEA decline with age.  A sixty-year-old will on average have only a quarter the 7-keto DHEA of a 25-year-old.  It’s for this reason that I especially like 7-keto-DHEA for folks who are at least edging into middle age.  In my experience, the people who benefit the most from 7-keto DHEA are those who are moving into middle age, are doing most everything right, and are still having a hard time with the last dozen or so pounds.  Perimenopausal women, especially.

In one study, 30 overweight adults were given either 100 mg of 7-keto DHEA or a placebo twice daily, and followed for eight weeks.  They were also instructed to exercise three times a week, and were put on an 1,800 calorie-a-day diet.  At the end of eight weeks, the placebo group had lost an average of 2.1 pounds versus 6.3 pounds on the 7-keto DHEA.  Thos on 7-keto DHEA also reported more energy.

How does 7-keto DHEA differ from plain old DHEA?  Simply, DHEA is what’s called a prohormone ? something the body makes other hormones from.  Those hormones include estrogens and testosterone.  7-keto DHEA has already been committed to a pathway that does not lead to estrogen or testosterone, alleviating concerns about spiking these sex hormones.

But that doesn’t mean it’s without additional health benefits.  In a number of small studies, 7-keto DHEA appeared to help the immune system stay up and running when confronted with old age and/or stress.  There are indications it might reduce cholesterol.  I, personally, am looking forward to seeing what other anti-aging properties this stuff will have to offer.

Pine nut oil, simply put, suppresses appetite.  In one study, for example, overweight women were given either 3 grams of pine nut oil or an olive oil placebo.  A mere half-hour later, the women who had been given the pine oil reported less hunger.  They reported that they planned to eat about a third less than the women who had gotten the olive oil.  It turns out, pine nut oil promotes the production of a hormone called cholecystokinin (CCK), which goes from our gut to our brain where it makes us feel FULL.  CCK also slows the rate at which food is emptied from our stomach, so we feel physically fuller as well.  So next time you make a salad, or a dip, or an appetizer ? something you eat at the start of a meal ? throw a little pine nut oil in.   A half-hour later, when you’re contemplating seconds, or dessert, it should start to kick in,.  By the way, the company we get our pine nut oil from has a website with some pretty good recipes: www.SiberianTigerNaturals.com.  (They even claim it can treat ulcers.  I have no experience using it that way, so if anyone tries it, please let me know!)

Coconut oil, on the other hand, will not suppress appetite.  But its calories burn a lot faster than those from other oils.  Don’t get me wrong: they’re still calories, and if you eat enough of them, you will gain weight.  The trick here, then, isn’t to add coconut oil to the diet ? it’s to replace other oils with it.

Like I said, the fats in coconut oil burn a lot more efficiently.  The anatomy, physiology, and chemistry of it all gets pretty complex (I’m happy to try and explain if anyone is really interested).  But here’s what happens in the real world: in one study people were given a meal containing 45 g of fats from either corn or coconut oil.  Six hours later, only 4% of the corn oil had been burned, whereas 13% of the coconut oil had been.