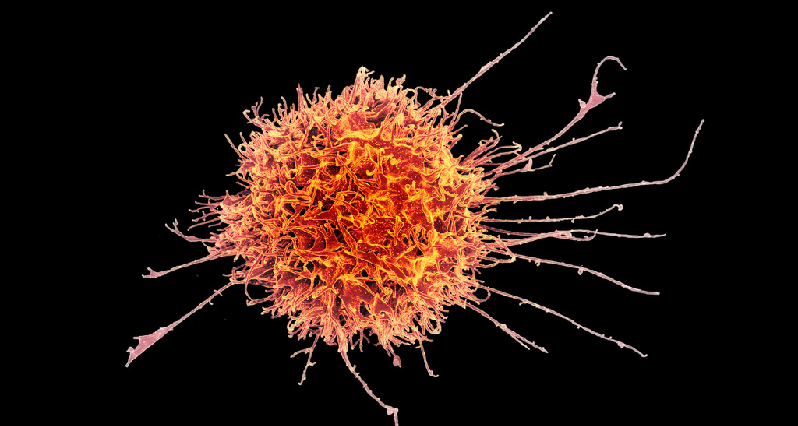 A human Natural Killer cell under an electron microscope (colorized image). NK cells are central to our immune defenses in general, and in particular against cancer.  Micrographic image published by NIAID (the National Institute of Allergy and Infectious Diseases) via Creative Commons license.

Cancer is the taboo topic in health food stores. Sure, we’re always eager to talk about prevention, but when it comes to treatment, we shy away from concrete statements. We do this because, while many of us have considerable knowledge about the herbs and vitamins in question, we rarely have an in-depth understanding of the 101 different kinds of cancer, or the finer points of chemotherapy drugs. We’re reluctant to share what we know because we are all too aware of the limitations of that knowledge, and of what is ultimately at stake.

Our silence can be frustrating, however, when it consigns a patient to the hands of medical professionals who are not necessarily informed about less conventional treatment options: people who respond to natural medicine at best with a noncommittal shrug of their shoulders, or, at worst, with a dismissive wave of their hands.

Hopefully, this article can at least partially resolve this predicament. It is not intended as a do-it-yourself guide: you should be working with healthcare professionals who can comment on these suggestions, modify them, and incorporate them into a larger treatment strategy. But by the same token, if the people you’re working with are unwilling to even consider these suggestions; if they reject them, not for any particular reason, but simply because they are unfamiliar; or with vague and unsubstantiated allusions to them being “dangerous,” you are strongly advised to consider working with someone else.

This article discusses 10 targets for treatment. Please don’t just pick one or two! They all complement each other. Together, they can have profound results.

Cancer starts with one cell after its DNA is altered by free radicals, toxic exposure, ultraviolet radiation, or a random error in cell division. 99.9999…% of the time, this change in the DNA isn’t a big deal: either the change is harmless, or it is so damaging as to be fatal to the cell. But every once in a blue moon, the changed DNA gives the cell new abilities while at the same time disconnecting it from the community of the body. If this renegade “altered self” cell manages to evade the immune system and multiply, it can lead to cancer.

Altered self cells resemble our normal cells enough so that the immune system can have a hard time recognizing them. Luckily, our immune systems include elite commando troops called Natural Killer (NK) cells, which specialize in seek-and-destroy missions against altered self cells.

A lot of supplements can increase the activity of NK cells, as well as other important components of our immune defenses. Most go by acronyms like IP6 + Inositol, Maitake D-Fraction, PSK (Krestin), AHCC, and MGN-3. Most are highly purified derivatives of medicinal mushrooms. Unfortunately, it is impossible to settle the which-product-is-better arguments. For example, PSK (derived from the Turkey Tail mushroom, Coriolus versicolor) is backed by nearly 400 studies, including over 50 human clinical trials. It’s been around for 20 years and is approved as a cancer drug by the Japanese government. D-Fraction (from the Maitake mushroom, Grifola frondosa) has maybe a tenth of PSK’s research behind it… but the results are more impressive. So which is better? Bottom line: right now, we just don’t know. So pick one, any one (personally, I like D-Fraction), and then back it up with an unrefined, broad-spectrum mushroom combination containing at least 3-4 major species. Immune support is equally important in remission: it’s one of the best ways to stay in remission.

Blood-borne cancer cells can be intercepted by an aggressive and alert immune system, so immune support is crucial here. Beyond that, there are two major approaches to this problem.

Cancer cells express adhesive molecules on their surfaces that help them stick to blood vessel walls and climb out into the surrounding tissues. Modified Citrus Pectin (MCP) can bind to these receptors, blocking them. There’s been a fair amount of research on MCP, mostly in animals, but also human trials with prostate cancer. So far, the results appear quite positive. MCP shouldn’t be confused with normal, “unmodified” citrus pectin.

The other approach is to support the integrity of collagen, which makes up the blood vessel walls. This should help prevent blood-borne cancer cells from breaking out and into the tissues. Based on the research of two-time Nobel Prize-winning chemist Linus Pauling, this approach is just now starting to be researched in test tubes, with what appears to be promising results. The formula uses the amino acids Lysine and Proline, the primary components of collagen; and vitamin C, which helps synthesize collagen. The usual dose in therapy is 6 g of vitamin C and Lysine, and 3 g of Proline a day in divided doses. Green tea is often added.

Every cell of your body needs to be within millimeters of a blood vessel or it will starve. Cancer cells are no exception. Tumors can’t grow beyond a certain size without enough new blood vessels to feed them. This process of growing new blood vessels is called angiogenesis. Substances that inhibit this process are labeled anti-angiogenic.

Green tea is the most well-known and best-researched anti-angiogenic medicine. Once again, there isn’t space to go into all the research here, but it’s solid. Shark cartilage is another popular option, although the research here is conflicting. Finally, there’s a brand-name extract of bindweed (Convolvulus arvensis) named Vascustatin, which in some very early research looks like it might be amazing…

Every cell of the body can create inflammation under certain circumstances – infection, injury, heat shock, etc. – using enzymes like lipoxygenase (LOX) and cyclooxygenase (COX) which turn certain, otherwise harmless, fats into pro-inflammatory compounds. Cancer cells almost always express much higher levels of LOX and/or COX than normal cells. You give them those fats and they will make inflammation.

Study after study shows that the more inflammation a cancer can create, the more aggressive it is, the faster it grows, the worse the prognosis. And it appears that suppressing this inflammation does help. There’s a lot of test tube research here, and animal studies dealing with over a dozen different kinds of cancer. And then there’s one human clinical trial: 341 women with invasive breast carcinoma were given standard treatment, plus either an anti-inflammatory NSAID drug or placebo. The women who got the NSAID did a lot better.

Most anti-inflammatories work by inhibiting COX, LOX, and other enzymes which catalyze the inflammatory cascade. Aspirin is of course the classic COX inhibitor. Among herbals, turmeric, ginger, bromelain, and boswellia are some of the better options. Ginger is nice because it doubles as an anti-nausea agent; turmeric, because it strongly supports the antioxidant status of the liver. Combinations are highly recommended, as they are more likely to target multiple enzymes in the cascade. One combo in particular is Wobenzyme from Mucos Pharma in Germany, where it is a popular adjunct treatment for cancer. Researchers theorize that Wobenzyme not only reduces inflammation but also helps strip away the cancer cells’ protective fibrin coating, laying them bare to attack from the immune system.

Even more important than anti-inflammatories, I believe, is to starve a cancer of the raw materials it feeds off of – those special fats, called omega-6 fats. Simply put, you should ruthlessly cut all omega-6s out of your diet. Meat, cheese, poultry? Forget it. Standard vegetable oils? No way. Supplemental oils such as Evening Primrose, Borage, and Black Currant? Not now. Don’t give the cancer a single drop. I can not stress enough the importance of this! (Although please note, I do not mean to imply that these supplemental oils increase the risk of cancer).

At the same time, up your intake of another family of fats called omega-3s, the healthy fats found in flax, hemp, free range eggs, and wild, cold water fish. (Farm-raised fish and eggs are not okay!) Beyond food, add fish oil supplements as well. Aim for at least a 1:1 ratio of omega-3s:omega-6s, and at least 3 grams a day total of omega-3s (or 15 grams if it’s from a vegetarian source like flax). Omega-3s compete with Omega-6s for access to COX and LOX. They’re also anti-inflammatory in their own right. Plus they help maintain immune function. Plus they help prevent cachexia – the severe wasting syndrome in cancer. For more information, see “Modu-lation of the Inflammatory Cascade: An Essential Target in Cancer Therapy,” in the October/ November, 2002 issue of The International Journal of Integrative Therapeutics. Come on in and we can give you a chart showing the omega-3 and -6 content of most oils.