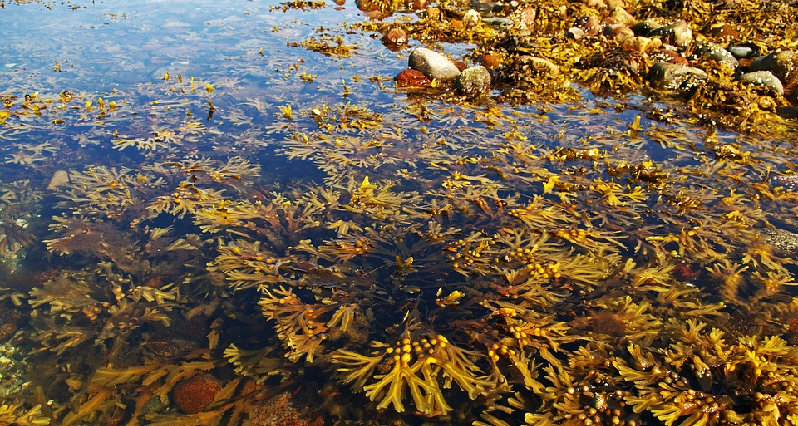 Bladderwrack seaweed is a good source of iodine, and compounds that may support the thyroid.

Ever since we hosted Mary Bove’s talk about the thyroid in January, people have been coming in saying how sorry they were to have missed it — and do we have something like lecture notes from the talk?  Unfortunately, we don’t.

Although I can’t cram into two pages what Mary Bove covered in an hour-and-a-half, this should be a start. If you want to learn more, check out the chapter on “Hypothyroidism” in The Encyclopedia of Natural Medicine, by Murray and Pizzorno; and Ryan Drum’s extraordinary article on the internet at http://www.partnereartheducationcenter.com/thyroid1.html. We’ll have a couple of paper copies of this at the store as well.

The thyroid gland regulates the body’s metabolism — how fast the cells of the body “do stuff.” As you can imagine, a dysfunctional thyroid could affect just about everything in the body.

There are two broad classes of thyroid dysfunction: hypothyroidism (too little thyroid activity) and hyperthyroidisim (too much activity). Notice I said low “activity,” not low “hormone.” It is possible to have plenty of the hormone and still have low thyroid activity… more about that later!

Symptoms of hypothyroidism include fatigue, weakness, weight gain, intolerance to cold, constipation, loss of libido, dry skin and brittle hair, irritability, and depression. Symptoms of hyperthyroidism include heart palpitations, restlessness and insomnia, weight loss, decreased menstrual periods, bulging eyes and trembling hands. (And bear in mind when you’re trying to diagnose yourself that none of these symptoms are exclusive to thyroid disorder!)

When the brain senses that thyroid activity is low, it sends a message to the pituitary gland, which releases something called Thyroid Stimulating Hormone (TSH). TSH then goes to the thyroid and tells it to make more thyroid hormone. But it’s not as simple as that: the thyroid produces two hormones: T4 (thyroxine) and T3 (triiodothyronine). Normally, it’s about 80% T4 and only 20% T3. But T3 is the active form of the hormone. So then you have to rely on other organs in the body, mainly the liver, to convert the excess T4 to T3 ? which they may or may not do efficiently.

With such a complex chain of events, you can surely imagine there are a lot of ways things can go wrong. And of course there are lots of lab tests to check every link in the chain.

However, the most accurate measure of thyroid activity is still decidedly low-tech. Since the thyroid controls metabolism, people with low thyroid have colder body temperatures than the rest of us. Testing for basal body temperatures actually works so well because it doesn’t just test a specific hormone ? it will detect thyroid dysfunction no matter what’s wrong: it measures the health of the entire system, not just a specific piece of it. You can always use the blood tests later to pinpoint the specific problem.

Here’s how you take your basal body temperature.

First thing in the morning, place a thermometer in your armpit and leave it there ten min-utes. Don’t do anything to raise your temperature; don’t even move. Now record your temperature. Do this at least seven days. Menstruating women experience body temperature fluctuations during their cycles; they should take their temperature on the 2nd, 3rd, and 4th days of their periods.

A normal temperature is between 97.6 to 98.2 degrees Fahrenheit. Anything lower than that strongly indicates hypothyroidism; anything higher is less conclusive, but suggests hyperthyroidism.

Unless you’re borderline, you should try to treat it only with the help of a licensed healthcare practitioner — one who knows about natural treatments. This is especially true if you are hyperthyroid.

That being said, there are at least three herbs useful in hyperthyroid states.

Bugleweed (Lycopus) is probably the strongest of the bunch. It blocks TSH activity at the thyroid. Lemon Balm (Melissa officinalis) does the same thing, only is weaker. And finally Motherwort (Leonorus Cardiaca) is can help with the tension, insomnia, and rapid heart beat that may arise from hyperthyroidism.

Hypothyroidism, or low thyroid, is much more common than the hyper state.  Here are some herbs you can use:

The conventional approach to hypothyroidism is to prescribe T4. This isn’t so bad, really, but involves a serious commitment: once you go on prescription T4, your body starts to depend on it, and it’s pretty hard to get off. If you do choose to go the prescription route, you might want to look at a T4/T3 combination. Many doctors still stick to the straight T4, arguing that it can be converted to T3 in the rest of the body. Others, however, will now prescribe the combo in the belief that it just makes sense to replace what your body would make normally. I’ve talked to a few people with hypothyroidism who said they really benefited when they switched to the combos. Since these are prescriptions, you would need to discuss this with your doctor.

A lot of natural approaches to thyroid dysfunction actually focus on helping convert T4 to T3. In this context, it’s worth looking at the herb, Guggul (Commiphora mukul). Although people will often say that Guggul increases T4 output, that appears not to be true (either that, or I just couldn’t find the research…) What is true is that Guggul can increase the conversion of T4 to T3 in the peripheral tissues. Guggul is also one of the best ways of addressing high cholesterol and triglycerides. In most people, it actually lowers the bad cholesterol while raising the good cholesterol. (This might just be an indirect result of better thyroid activity).

Just so you know, the following are things which will impair T4 to T3 conversion: stress, corticosteroids like prednisone, extremely low-carbohydrate diets, and selenium deficiency.

One concept Mary Bove really stressed during her talk was using adaptogenic herbs to increase thyroid activity. Adaptogenic herbs help the body react more gracefully to stress ? they lessen the effects of stressors, both emotional and physical, on the body. To be honest, I couldn’t find much research specifically relating to the thyroid here, but her recommendation makes sense, especially bearing in mind the role of stress in impaired T4 to T3 conversion. Adaptogenic herbs include Ashwaganda (Withania Somnifera), Eleuthero Root, the Ginsengs, and Rhodiola. The AOR company makes a wonderful all-around combination called Orth-Adapt.

Seaweeds for the Thyroid

One of the most time-honored approaches to low thyroid is to take kelp and dulse (seaweed) supplements, or to add these to the diet. I won’t even touch this topic other than to say you really, really ought to read the Ryan Drum article. He covers seaweeds in way more depth than I ever could, and provides what I think is a very logical practical guide. READ IT!

There are a whole bunch of nutrients necessary for proper thyroid function, both directly and indirectly. These include selenium, copper, zinc, magnesium, vitamin A and vitamin C. And then there is iodine and the amino acid L-Tyrosine, which thyroid hormones are actually made of. You should certainly make sure you’re getting enough of all of these. But, unlike many other disorders that can be treated with natural medicine, you don’t necessarily help things here by taking more than enough. Excessive doses of iodine should actually be avoided.

The most common form of hypothyroidism is autoimmune hypothyroidism (or “Hashimoto’s Thyroiditis.”) Hyperthyroidism can also be autoimmune. An autoimmune disease is a disease where the body’s own immune system gets confused and starts attacking it. In this case, the attack centers on the thyroid, where it interferes with production of thyroid hormone. Ideally, in these cases, you’d address the underlying autoimmunity rather than just nourish the thyroid.

I’m usually a bit sheepish recommending Noni juice, ever since it was on the Oprah show a few years ago and people started calling it the Greatest Thing Since Sliced Bread, the Elixir of Life, and the Fountain of Youth ? all this for an herb that isn’t backed by a single decent clinical trial. Well, Noni might not do everything people say it does, but it can be surprisingly effective for most autoimmune disorders. I’ve talked to three autoimmune thyroid patients (two hyper, one hypo) who have great results with it. Follow the directions on the bottle ? especially about what foods you can and can’t take it with ? and give it at least a month. Good luck.