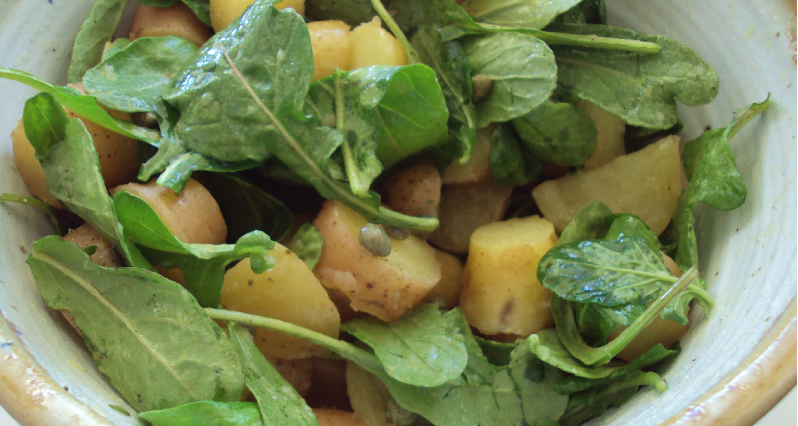 I love this recipe by Amanda!  The website, “WhatsCookingAmerica.net” has wonderful information about potatoes such as archaeologists working in Peru and Chile found potato remains dating back to 500 B.C.E.  The Incas of Peru not only grew and ate potatoes, but buried them with their dead, so revered were they.  Potatoes were also dried and carried on journeys to eat on the way or make into stew.  Each year, I look forward to the new crop of yellow potatoes and love the purple ones too!

Why cilantro?  Because it tastes great.  But did you know that cilantro, used as medicine and food by the Romans, is said to help detox the liver?  It’s also a good blood cleanser, and I like that cilantro is said to stabilize blood sugar since potatoes have a high glycemic index.  This doesn’t mean a diabetic is okay eating five pounds of potatoes, even with cilantro and with the addition of a good fat like olive oil to help “smooth” things out.  So exercise good judgment if you have blood sugar problems!

Makes enough to feed about 8 people

Cover potatoes in water, turn on flame and bring water to a boil, and cook potatoes until soft, about 25 minutes.  Drain and place hot potatoes in bowl. Sprinkle with apple cider vinegar, salt and pepper. Toss.

In a measuring cup, squeeze a little lemon over the minced garlic to mellow it out. Whisk in olive oil.

Pour over the warm potatoes and toss to distribute. Stir in the spinach, which will wilt a little bit and cook from the heat. Sprinkle cilantro and give it another good stir. Add salt and pepper to taste and serve!