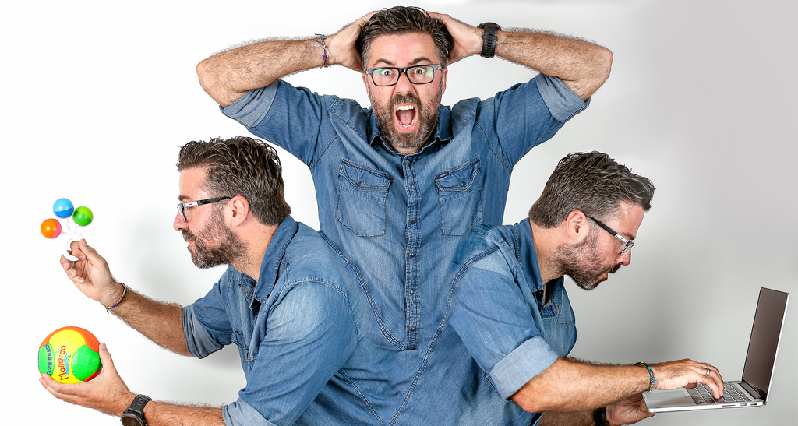 The holistic approach to dealing with intense stress isn’t to survive it but to remove yourself from it whenever possible. But sometimes, no matter how calm and in-touch-with-nature you are, two or three weeks just come out of nowhere and hit you like a ton of bricks – you’re dealing with sleep deprivation, overwork, physical and emotional exhaustion. You can’t concentrate, you can’t get to sleep, your blood pressure shoots through the roof, and it seems like every time somebody sneezes you catch their cold.

This is an article about surviving those times.  Hold on to it.  You never know when it might come in handy.

Before writing this, I sat down with Sean Casey LeClaire, hoping to glean some words of wisdom. LeClaire is a life coach in Concord who, among many other things, helps high-powered professional types learn how to relax. (As a former ad executive who used to work 100-hour weeks, he has plenty of practice). LeClaire advocates taking what he calls “body-centered breaks” – “any movement, physically, that brings you in contact with your breath and body.” So you stop working and you get up from your desk, and maybe you stretch for a moment, or you breathe deeply and notice a little piece of nature. “Take two minutes every hour – just two minutes!” he says. “You don’t go to the gym; you don’t go to the yoga studio – it happens wherever you are”

Huh? Okay, let me explain. Exposure to cold is stress, as are physical overtraining, low blood sugar and sleep deprivation. The body responds to all of them the same way, and they all add up. So maybe you can’t control the current crisis. But you can make sure to eat breakfast (or at least grab a protein bar). Getting a good night’s sleep is absolutely crucial. Our February, 2005 newsletter on insomnia would be a good start.

2. Herbal adaptogens can be invaluable in dealing with all kinds of stress.

Simply put, adaptogens are substances that increase the body’s nonspecific adaptation to stress, and the key word here is nonspecific. Think of it this way: a sweater will increase your resistance to cold, and a cup of coffee can fend off sleep deprivation – they’re both specific to certain stressors. Adaptogens, on the other hand, increase your resistance to all types of stress. That doesn’t necessarily mean you’ll feel warmer or more wakeful, just that the consequences of cold and sleep deprivation (and any other kind of stress) are minimized: you experience less fatigue, your immune system won’t be hit as hard, blood pressure doesn’t go through the roof, etc.

This all sounds great, but what does it mean in real-world terms? Well, take for example the adaptogenic herb, Rhodiola rosea. In one study, Rhodiola or placebo was given to 60 Indian medical students in a Russian medical school during their final exam period. (Students from India were chosen because they had to deal with the stress of a foreign language in addition to the typical final exam brain overload and sleep deprivation). After three weeks, the students receiving the Rhodiola did better than the placebo group on tests of physical fitness and mental fatigue. They also reported better general well-being. And they got better grades on their exams, too!

In another trial 120 people were given either a single dose of Rhodiola or a placebo before a series of proofreading tests over 24 hours. Well, the folks who took the Rhodiola didn’t proofread any faster than the ones on the placebo; they did, however, make 88% fewer mistakes and the difference grew more pronounced as the day wore on and fatigue had a chance to build up.

Then there’s the classic swim-to-exhaustion test (which isn’t “nice” as animal research goes, but is an effective way to measure fatigue). Mice are put in a tub of water and watched to see how long it takes before they’re too exhausted to keep swimming. Rhodiola improved swimming times significantly, as did practically every adapt-ogen: ginseng (Panax ginseng), ashwaganda (Withania somnifera), Siberian ginseng (Eleutherococcus senticosus), etc.

I focused on Rhodiola for two reasons. First, there’s a lot of human research with it, so it’s easier to write about. And secondly, Rhodiola can work quickly: in the proofreading test it worked within an hour or two.

That being said, here’s the super-quick and abbreviated guide to choosing an adaptogen:

3. Adaptogens mediate the response to stress.  Other herbs are more directly calming.

A lot of this was covered in the March and April newsletters, so I won’t get into it again, other than to highlight Passionflower (Passiflora incarnata) for stress that’s skyrocketing your blood pressure – and then it stays elevated even when your trying to relax; holy basil (Ocimium sanctum) and the amino acid glycine (try 3000 mg or so) to calm rather than sedate; and a formula from Avena Botanicals called “Into The Flow.” It’s actually intended for PMS, but the more I look at it, the more it looks like a great nerve tonic for anyone, male or female, who is feeling stressed and irritable.

The #1-selling herbal product on the planet is an extract of Caffea arabica (a.k.a. “brewed coffee”), and that’s because it works. A better choice is the Argentinian drink called Maté, which contains mateine instead of caffeine. Mateine is longer-acting, and when it finally does wear off, it doesn’t wear off as abruptly as caffeine. Or look for a formula called “Catuama” which combines research-proven Guarana with other rainforest herbs. It’s new in this country, but it’s clinically proven for reducing fatigue and the best-selling herbal product in Brazil.

… I have personally found two supplements to be remarkably effective in surviving sleep deprivation: the mushroom Cordyceps sinensis, and the trace mineral, Germanium[1]. Cordyceps increases oxygen uptake from the lungs, while germanium increases the oxygen-carrying capacity of the blood.

I know, I know… “oxygenation” is the new buzzword these days, used mostly to sell overpriced tap water; Cordyceps and germanium, however, are the real deal. Back when I was working full-time days, going to school full-time nights (plus Saturdays), and commuting two hours a day, this combination was a life-saver three or four times a month. I found that two droppers-full of Cordyceps extract, plus 100 mg of germanium taken before bed allowed me to wake up three hours later like I had a full night’s sleep. Or if I was going to be up till 2:00 or 3:00, I’d take the same amount around 9:00. You’ll have to figure out the dosage and timing that works for you.

More than any natural antidepressant it tends to work quickly, in a matter of a day or two. Researched doses are 800-1600 mg a day in divided doses.

7. And if “the next two weeks” turns into two months, and then two years…?

Should we all follow Sean LeClaire’s example, quit our high-powered job, travel the world, then settle down as a poet and life coach, working 3 weeks a month? Well, if your job is giving you ulcers, and is on its way to giving you a heart attack, maybe you should.

[1] A few notes on germanium. First, although there have been reports of germanium toxicity, this is only a problem with inorganic germanium salts, never with organic germanium compounds. Secondly, if you are a competitive athlete, make sure it isn’t banned by your sport’s governing body as a performance-enhancing substance. (And no, it’s not a steroid). Finally, since it increases oxygen in the blood, the body eventually responds by making less oxygen-carrying red blood cells. Since the average red blood cell lives four months, you don’t have to worry about using it for a few days.