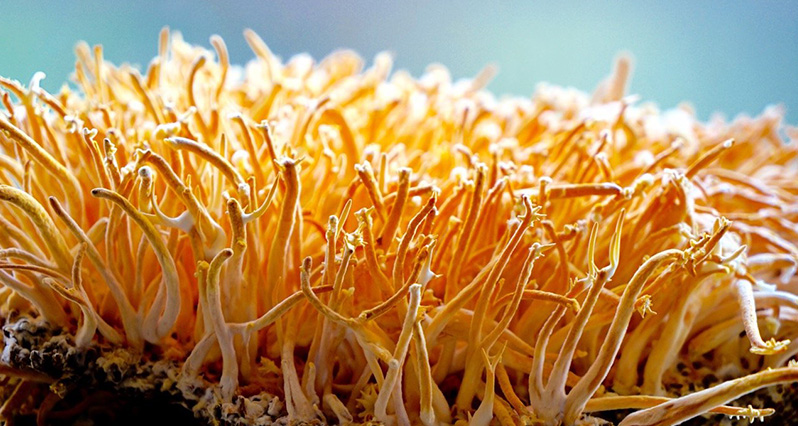 About a year ago, I went hiking with my friend, Paul Gorman. Normally when I go hiking, I’m the one who has to slow down so that people can keep up with me. But Paul is such an incredibly strong hiker, I quickly found myself struggling to keep up with him. I was out of breath, tired, and sore. That’s when Paul offered me the cordyceps.

I’d heard about cordyceps, but I didn’t know very much about it. Just that it was a mushroom, a highly revered tonic in China, extremely rare and valuable.  And I remembered that it grew in some sort of a peculiar fashion. But I’d never actually taken it. Now here was Paul, a pretty decent herbalist, telling me that this supplement was “amazing… you’ve got to try it!” He gave me a dropperful, and then a couple of minutes later, he gave me another. I didn’t notice anything at first, certainly nothing like the jolt of frenetic energy you get from caffeine. In fact, I really didn’t feel much of anything until about an hour later when Paul asked me, “So, how do you like the cordyceps?” It was only when I stopped to think about it that I realized I wasn’t tired, I wasn’t out of breath, and I wasn’t even sore. In fact, I felt great!

Cordyceps doesn’t grow on wood or in dirt like most mushrooms. Instead, cordyceps spores infect caterpillars, and then the fruiting body (the “above-ground part”) sprouts out the caterpillar’s head. Makes you wonder how the first person ever thought to eat one… In China, cordyceps is called “caterpillar fungus” and “summer plant, winter worm.” As you can imagine, cordyceps is quite rare in the wild, and for centuries it was intended only for the Emperor’s palace. Up until recently, it was still extremely expensive. But in the last few years, people have learned how to grow cordyceps on brown rice. A number of studies have been done comparing the wild cordyceps to the cultured, with the cultured usually holding its own or even surpassing its wild counterpart. Plus it’s a lot cheaper. And it smells better, too.

Like most medicinal mushrooms, cordyceps can benefit the deeper levels of immunity and liver function, and work as a general tonic. But what really distinguishes cordyceps from these other mushrooms is the incredible effect it can have on energy levels. Cordyceps dilates (opens) the microscopic airways in the lungs. This oxygenates the blood, which in turn delivers oxygen to every cell of the body. And oxygen is key to unlocking the energy in food.

There’s some pretty complicated chemistry going on here, but the bottom line is this: when oxygen is present, you get 16-18 times more energy per calorie than when it isn’t. But that’s not all. With oxygen, food “burns cleaner” – there are no major waste products that the body can’t deal with. Without oxygen, however, you produce a waste product called lactic acid which makes your muscles feel tired, heavy, and sore. (Lactic acid eventually seeps out of the muscles into the bloodstream, where it travels to the liver to be recycled. But this whole process takes hours).

What all this means is that cordyceps really does give you more energy, and can leave you feeling less sore to boot. Kurt, who works at the store and also cycles competitively, experimented with cordyceps for his last big race, a 144-mile National Calendar event. He took one dropperful before breakfast, one at the beginning of the race, and a third in his water during the race. He said, “Taking the cordyceps kept me feeling fresh over several hours. When you’re going really hard, it’s like you have an appetite for oxygen, and the cordyceps made me feel like my lungs were huge. In a really big race, you suffer big-time. The cordyceps took the edge off the suffering when the pace was really high.” I’ve also heard that the entire Los Angeles Lakers basketball team has been taking cordyceps for three years – although I heard it from a salesman who works for the company that sells it, so who knows…? (I know one thing, though, and that’s that the Celtics sure haven’t been taking any cordyceps the last three years)

Of course our muscles aren’t the only part of us that can benefit from more oxygen. Our internal organs, our immune cells, and especially our brains, all use oxygen, too.

When I’m in school, I take cordyceps once or twice a week to stay awake for a late-night class. I usually do about a dropperful-and-a-half, about a half-hour before class starts. I like the alert and wakeful way it makes me feel, and I especially like the fact that it won’t keep me awake afterwards. I also appreciate the fact it doesn’t make me jittery like caffeine. Grace also uses cordyceps the same way. “Sometimes I wake up and I know it’s going to be one of those days, like if I don’t do something I might fall right asleep when people are talking to me. But that would be rude, so that’s when I take the cordyceps.”

So what else does cordyceps do other than increase energy and general well-being?

Cordyceps is useful in asthma, and in inflammatory conditions of the lungs. Cordyceps has also been beneficial in cases of kidney failure and liver disease. And it can be help altitude sickness

A number of studies in animals show that cordyceps will restore immune function and red blood cell counts after they have been depressed by chemotherapy. There have also been animal studies done on cordyceps and cancer. The results here have been promising, but not conclusive.

In 155 cases of various sexual problems, 64 percent showed some improvement with 330 mg of cordyceps, three times a day.

A double-blind, placebo-controlled study followed 273 patients with hyperlipidemia (high triglycerides, or lots of fat in the blood: a risk factor for heart disease) for two months. Total cholesterol went down 17.5% in the treatment group, and triglycerides went down 9.9%. Another study examined what cordyceps would do for people with cardiac arrhythmias. A 75% improvement was noted after three weeks, taking 250 mg three times a day.

Finally, one study followed 23 tinnitus sufferers who were given cordyceps. Eight were “cured” and nine were “significantly improved.” Cordyceps was effective where tinnitus was caused by fluid in the middle ear, but not when there was a long-standing disorder of the auditory nerve.

Numerous studies, in animals and in humans, show cordyceps to be extremely safe. Because cordyceps opens up the lungs, you probably don’t want to use it around heavy smog. (On the other hand, I love taking cordyceps in the woods. I can feel that rich, verdant air filling my lungs and nourishing me. It’s almost a spiritual experience!)

The doses of cordyceps I was taught to use, and the ones I mention in this article, are a lot higher than the ones recommended on the bottle. Most of the studies have also been done using regular, smaller doses, instead of occasional, large doses. I’ve never had a problem with the large doses, and neither have Paul, Kurt, Grace, or anyone else I’ve spoken to. Use common sense: don’t take a huge dose your first time (like I did), and if you feel funny, stop taking it.

One last thing to remember. The body compensates for having lots of oxygen by producing less red blood cells (which carry oxygen), so this could theoretically happen if you took high doses of cordyceps day-in, day-out. I’m just guessing here. On the other hand, cordyceps is considered a blood builder in Chinese medicine, and it can restore red blood cell counts that have been depressed by chemotherapy. Either way, the average red blood cell lives six months, so nothing dramatic is going to happen overnight.

(Much of the information for this article was taken from the book, Medicinal Mushrooms, by Christopher Hobbs).