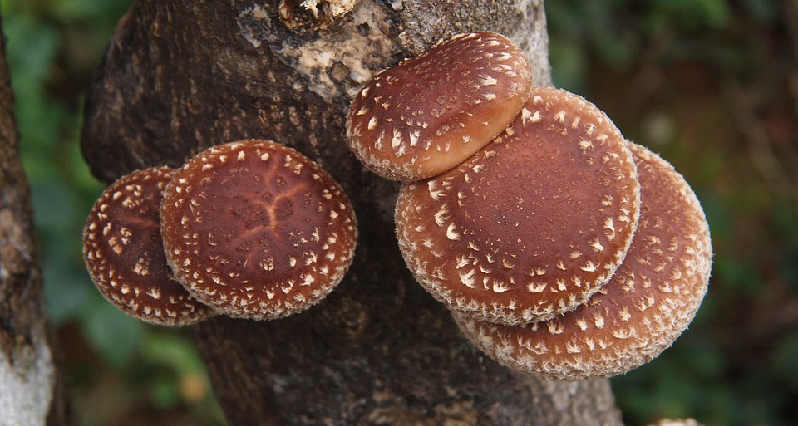 Shiitakes are, among other things, one of the most commonly misspelled items in the produce department. (Hint: you really want to use both I’s).

What are mushrooms anyway?  They’re not vegetables, they’re not fruits.  They don’t grow leaves, roots, flowers or make seeds.  They don’t require sunlight to grow, or produce chlorophyll.  They live off decomposing plant matter.

Well, mushrooms are in fact fungi whose only happiness lies in releasing spores into the air so they can procreate.  And they’ve been doing that forever – we’ve discovered traces in Stone Age relics.  The ancient Egyptians wrote that mushrooms represented immortality.  The Greeks attributed to them magical powers, and Romans referred to mushrooms as “the food of the gods.”

Of the more than 10,000 species of mushrooms, we know only about 100.  The first cultivated mushrooms were most likely the shiitake (shee-TAH-kee) mushrooms, which have been grown in Japan for more than 2,000 years.

Today shiitakes have achieved star-celebrity status in the culinary world where you might find them called “Chinese black mushrooms” or “golden oat mushrooms.”  They’re chewy, meaty and have an earthy, smoky flavor.

Nutritionally, shiitakes are a superior source of the B vitamins (nerve and stress vitamins) and contain protein, enzymes and complex carbohydrates.  Even though they’re 90% water, shiitakes possess a higher nutritional classification than do carrots, corn, potatoes, tomatoes and turnips in terms of quality and quantity of protein content.  They also appear to have significant anti-fungal, anti-tumor and anti-viral properties.

For the past thirty years, scientists, mainly in Japan, have been amassing evidence that shiitakes can help the body fight heart disease, cancer, and viral infections.  Studies report that shiitake extracts can be used successfully in the treatment of diabetes, high blood pressure, allergies and autoimmune disorders, not to mention ongoing trials in the treatment of stomach ulcers, cirrhosis, hepatitis and rheumatism.

In a 1974 study, researchers concluded that shiitake had “completely nullified” the effect of consuming 60 grams of butter daily on the cholesterol level of the participants.   Another study reported that women who consumed 1/3 ounce of dried shiitake or 3 ounces fresh every day for seven days had their total cholesterol levels drop between 7-12%.

Kenneth Jones, in his book, Shiitake: The Healing Mushroom, related that shiitakes have been used in folk treatments of colds, measles in children, bronchial inflammation, stomach ache, headache, faintness, smallpox and mushroom poisoning.

As far back as the 14th century, the Chinese described shiitakes as food that activates “Qi,” or life force, which protects the immune system.  The ancient Chinese used shiitakes to nourish the blood circulatory system and treat colds.

In 1969, researchers at Tokyo’s National Cancer Center Research Institute isolated a compound from shiitake they named “lentinan.”  Researchers have since demonstrated that lentinan works by stimulating immune cells to rid the body of tumor cells.  In Japan, lentinan, or its extract called LEM, is approved for use as a drug to prolong the lives of patients undergoing chemotherapy for stomach cancer. It’s been found to be more lethal to HIV-infected cells than AZT in test tubes, and to block HIV cells from reproducing and damaging helpful T cells.

For those of us who suffer no serious illness and who don’t need to work with our doctor, a traditional preventative dose is 1-2 fresh shiitakes daily or about 1/3 an ounce of dried shiitake.  Commercial preparations in capsule form are also available.  Fresh shiitakes are easy to use.  Just slice, and throw them in with whatever else you’re sauteeing.

Can you use dried shiitakes in lieu of the fresh mushrooms?  Yes.  To reconstitute, simply soak dried shiitakes in hot water for 20 minutes or up to 2 hours.  Remove mushrooms from liquid and squeeze.   Save and use liquid in place of liquid called for in recipe or drink as mushroom tea.  Shiitake broth used in a recipe will impart depth and flavor to your dish.  Mushrooms can be used whole or chopped in recipes.

Want a simple gourmet way to make your shiitakes?  Using fresh or reconstituted dry shiitakes, toss with your favorite pesto (there’s no hard and fast rule here – use as much or as little pesto as you like, and whatever kind you like – you need enough pesto so your mushrooms are lightly coated) and bake in 350-degree oven for about 20 minutes.  Serve as appetizer or accompaniment to dinner.  To vary the flavor, toss mushrooms with some toasted sesame oil, sesame seeds and some tamari.  Or make them spicy by adding cayenne pepper.  Or use a curry sauce.  You get the idea!

I find that slicing and adding shiitakes to any soup, casserole or stew lends a complex flavor, a chewiness, and provides some old-fashioned health care in the cold wintry months.

Did you know that, in addition to fresh shiitakes, we carry bags of frozen, sliced shiitakes to use, no muss, no fuss?

Finally, our store manager, Jim Leahy, said, “I think the most interesting thing about mushrooms is that their function ecologically is to break down matter and return it to the earth.”