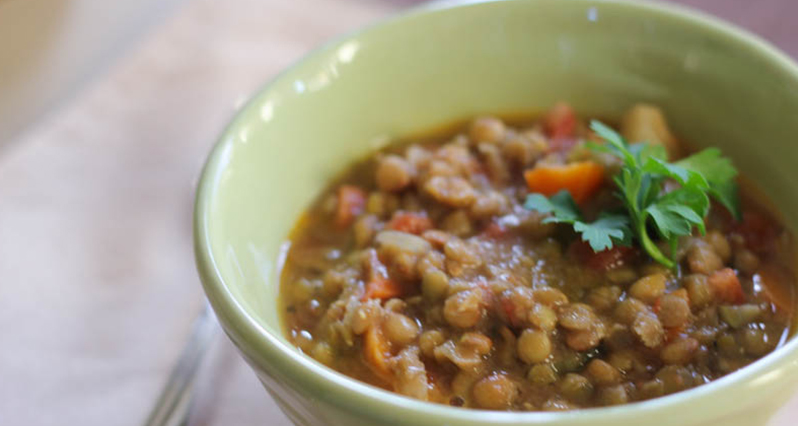 It’s January. The days are dark but starting to lengthen. Still. If you’ve splurged at the holidays and need help paying bills, try soothing soul and pocketbook with good food like soup. I always say that one can feed an army on a handful of lentils… This pot of soup will feed your army, or you, with leftovers in containers to pop in the freezer for next week and the week after. How much does this soup cost to make using ALL organic ingredients? About $10 for the whole pot, or $1.25-$1.50 per person. Cost fluctuates with the price of veggies.

Did you know that lentils are composed of 26% protein, one of the highest level of protein from any plant-based food after soybeans and hemp? Lentils are eaten in many countries daily, sometimes spooned over rice.

This recipe follows my characteristically simple formula for soup: throw everything in a pot, bring to a boil, lower heat to lowest, cover pot and simmer. In this case, simmer the soup for about two hours. Perfect to make on a Sunday morning when you’re reading the newspaper. Fold in chopped greens the last 5-10 minutes of cooking. Give a good stir and serve that later that day or the next.

*Depending upon your pot, you may need to add more water. I cooked mine in a pot whose lid didn’t fit tightly, and the water steamed out, so I had to add two more cups of water as the soup simmered. I’ll use a different pot next time, but in case your pot is like mine…Feel free to make this soup non-veggie by simmering with a ham bone, but I like it just as it is!