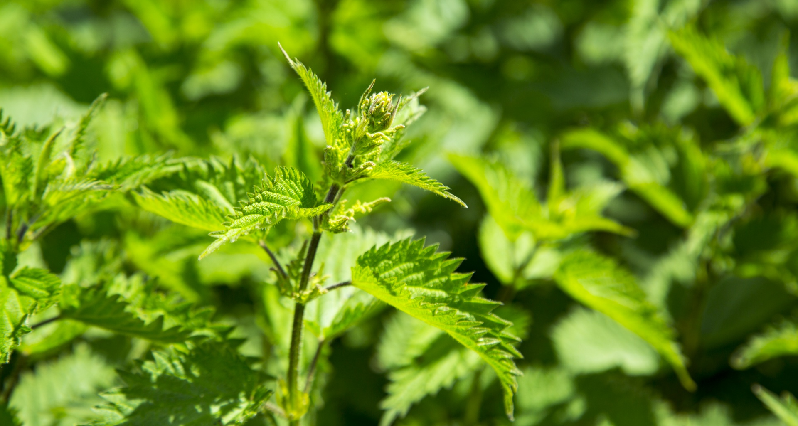 Stinging nettles are a useful remedy for premenstrual water retention. Plus, the tea is quite pleasant testing, hot or iced.

Many women experience what they call a Premenstrual Syndrome, or PMS. For a few days before their period, they may become angry, moody, irritable, tired, and/or depressed. Some women report water retention and bloating, breast pain or tenderness, headache, digestive problems, and/or food cravings. These symptoms last a few days to a week before their periods, and go away within a day or two of their period starting. While certain medical problems, such as asthma, migraines, and epilepsy may also get worse around the time of a woman’s period, these don’t officially qualify as PMS. Menstrual cramps and fibrocystic breast disease also are not considered PMS, because they don’t occur before (pre) menstruation. These two will be covered next month.

If you have really, really bad PMS, the kind that interferes with your life, it might be worth looking deeper. A 1985 study found that a full 75% of women who sought medical help for PMS had something else going on which made the symptoms worse. Most of these had depression or other mood disorders, although substance abuse problems, eating disorders, and oral contraceptives (“the pill”) were also issues.

What to do? The first line of defense for PMS is …EXERCISE! Study after study shows that women who exercise regularly do better on every single symptom of PMS. Any exercise is good, but in this context, getting your heart rate up appears to be more important than weight training; frequency of exercise, more important than intensity. This can really work, and it works a lot better if you do it all month, not just during symptoms. Barbara in our store mentioned to me that certain breathing exercises also make a difference.

Many traditional herbalists and naturopathic doctors recommend supporting the liver to deal with PMS. This makes a certain amount of sense. After all, it’s the liver that processes and gets rid of excess estrogens. So a sluggish liver may contribute to hormonal imbalances. Milk Thistle, Dandelion Root, Burdock, and Oregon Grape Root are just a few of the herbs useful here. Just as important as supporting the liver directly is the “get out – and stay out” principle of detoxification. In other words, much of what’s slated for elimination and subsequently dumped into the gut will be reabsorbed from there right back into the body. Fiber is actually quite useful in terms of preventing this, as are probiotic bacteria. While results with this approach are mixed, it’s still worth looking at. After all, it might work. And besides, you’ll be lowering your cancer risk, improving some troublesome skin conditions, dropping your cholesterol, etc.

B6 is a versatile nutrient that facilitates close to a hundred chemical reactions in your body, including the formation of all the major mood-regulating chemicals like Serotonin, Dopamine, and Norephinephrine. (These are the same chemicals that popular antidepressants like Prozac, Zoloft, St. John’s Wort, and SAMe work on.) B6 is also necessary for the brain to process fats and oils, an important part of brain health which will be covered in Part II. Note that B6 doesn’t force unnatural levels of these substances on the brain; it simply supplies the tool so that manufacturing can keep up with demand. It doesn’t elevate mood so much as it stabilizes it.

B6 has been studied a fair amount in PMS, usually with good results, especially for the mood symptoms. Nevertheless, a number of review articles recommend not using it, citing two factors: it hasn’t worked in all the studies, and it could potentially by toxic.

It does work, but it works best in higher doses. B6 “toxicity” is overblown for a number of reasons. First, problems are extremely rare. Secondly, these problems are not serious: you get something called “peripheral neuropathy,” a tingling pain in the nerves, usually in the hands and feet. So then you stop taking B6, and it goes away, simple as that! Besides you can sidestep potential problems by taking B6 in its active form, called Pyridoxal-5-phosphate, or P-5-P. You see, B6 is only toxic when the body can’t keep up the pace of activating it…and the P-5-P is already active. I usually recommend the P-5-P for this reason, and also because it works better. 50 mg, twice a day is a good starting dose, to be taken throughout your cycle.

You might also want to look at the “Maxine” multivitamin for women, from the Country Life Company. It’s a complete multi, with extra herbs for PMS, and 200 mg of B6.

Many people, me included, have the enjoyable side effect of more vivid dreams when they take B6. Some alternative doctors feel that lack of dream recall is a sign of B6 deficiency.

Very good research here. In one study, 497 women received either 1200 mg of calcium (as calcium carbonate) or a placebo for three cycles. At the end of the trial, the women on the calcium had a 48% improvement in symptoms, vs. 30% for the placebo group. Presumably, a superior form of calcium to carbonate would work even better, at a lower dose.  Meanwhile low magnesium levels have been found in women with PMS, and in some studies, magnesium has been helpful.  Consider magnesium especially if your muscles feel tense, and if you cramp up.  An Epsom salts bath is a wonderful way to get a lot of magnesium, fast.

Once again, I’m trying to fit this into two pages, so this discussion has to be limited to two or three good herbs out of more than a dozen.

Chaste Tree Berry (Vitex Agnus-Castus): Chaste Tree Berry, or “Vitex,” increases the release of lutenizing hormone (LH) from the pituitary gland in the brain. And LH is what stimulates the release of natural progesterone in the body. Vitex has been the subject of a number of studies with PMS, the biggest of which was published in the British Medical Journal in 2001. In it, 170 women with PMS got either Vitex or a placebo. Women were considered to respond to treatment, if they had a fifty percent or better reduction in symptoms. 24% responded to the placebo, while 52% responded to the Vitex. In another study, 40 women with PMDD took either Vitex or Prozac. While Prozac was slightly more effective for the mood symptoms, Vitex was more effective for the physical symptoms. And although Vitex will eventually stop working if your stop taking it, some researchers have found residual effects as much as three cycles after discontinuation.

Ginkgo Biloba: In a placebo-controlled study with 165 women, this herb was shown effective for water retention and breast tenderness. The dose was 80 mg of a standardized extract twice a day, from roughly two weeks before their period until their period ended.

Stinging Nettle (Urtica Dioica) Leaf: This is a diuretic, useful specifically for water retention. It’s true there are literally dozens of effective diuretics in the herbal kingdom, but I’m singling out this one because it’s recommended by my favorite herbalist, Michael Moore: “it works well for major premenstrual water retention, particularly since it also has astringent effects that keep it from over-stimulating the uterine lining. Some volume diuretics such as Juniper, Parsley, and Celery can stimulate the uterus and create the potential for disorganized menses. Others, such as Uva Ursi or Manzanita, can be so astringent as to impede flow.” (From Medicinal Plants of the Pacific West.) Try a couple cups of the tea. It’s pleasant enough tasting.

Often combination formulas work better than single herbs. While there are lots of good ones out there, two that women have spoken especially highly of are put out by Pioneer, and Gaia Herbs. Pioneer’s formula provides four of the most basic herbs, plus decent levels of magnesium and vitamin B6. Gaia’s formula doesn’t have the magnesium or B6, but the herbs are put together in a more complex, well-rounded, holistic way. It even comes in two parts, a Days 1-14, and a Days 15-28. The feedback we’ve had so far on this one has been very positive.