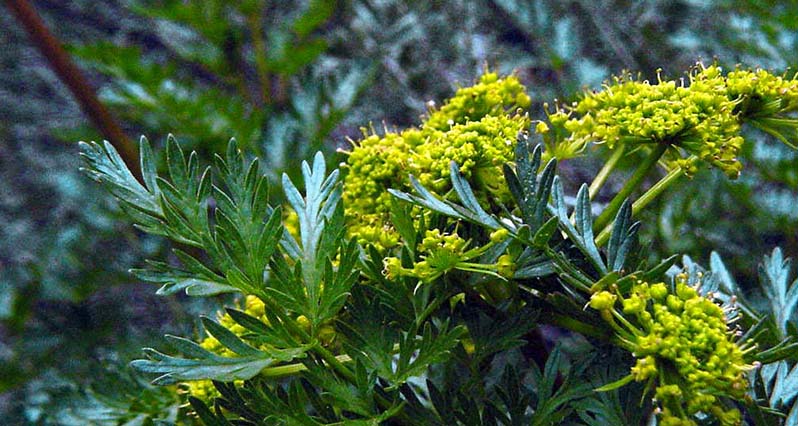 Lomatium may very well be the best antiviral we have. It’s certainly the best and strongest I’ve ever used both topically and internally, and especially for the lungs. So why haven’t you heard of it?

Lomatium was highly regarded by the Native American peoples of the high plateaus of the Pacific Northwest, who used it as a primary herb for all sorts of infections and lung ailments. Unfortunately, by the time that white settlers were making inroads in the region, medical science had already “advanced” past the stage where they believed there was anything left to learn from native peoples about native plants. Sure, frontier medicine might do in a pinch. But modern, official, civilized medicine (i.e. purgative, cathartics, and electroshock) was to be preferred.

We’re still feeling the repercussions of this bias. Look at the shelves of your local natural product store: almost every major American drug plant in commerce is either an East Coast native (Goldenseal, Cranberry, Willow, Slippery Elm), developed by European scientists (Echinacea, Black Cohosh, Saw Palmetto), or recreational (Coffee, Tobacco, Marijuana). Only now are we really beginning to look at our vast Western pharmacopeia.

In retrospect, we could have looked a lot sooner. And it’s not like we didn’t have clues. Back in 1920, a young physician named Ernst Krebs published an account of his experience with Lomatium in the Bulletin of the Nevada State Board of Health. Krebs had been assigned by the Indian Bureau to the Washoe reservation, and he was there when the Spanish flu hit. (The so-called Spanish flu was an avian strain that killed more than 500,000 Americans, and between 20 and 100 million worldwide):

“…Whether a coincidence or not, there was not a single death in the Washoe tribe from influenza or its complications, although Indians living in other parts of the State where the root did not grow died in numbers. It was such a remarkable coincidence that a practicing physician who saw apparently hopeless cases recover without any other medication or care of any kind investigated the root. A preparation was prepared and employed in a great many cases among the whites, from the mildest to the most virulent types of influenza, and it proved, among other things, that it is the nearest approach we have today to a specific in epidemic influenza and the accompanying pneumonia… Other physicians were induced to give it a trial, with the same results. It is beyond the experimental stage, as its therapeutic action in this direction is established and beyond any doubt. The cases in which it has been used run into the hundreds. There is probably no therapeutic agent so valuable in the treatment of influenzal pneumonia.”

Too good to be true? Well, we have no reason to doubt him. (Contrary to popular belief, this is not the Ernst T. Krebs Jr. who would later get all quack-y claiming he could cure cancer with “vitamin B17.”) But his account was published, and then, seemingly, ignored.

The next we hear of Lomatium is from a researcher named Percy Train who was sent to Nevada by the U.S. government to screen local plants for potential drug development. He spent six years there, starting in the mid 1930s, and found nothing that even touched Lomatium for sheer germ-killing firepower. In the words of the late, great herbalist Michael Moore, “It killed just about every microbe his research group tested it against, and you could douse rats in it without hurting them.”

Train published his book in 1941. Once again, published, then ignored.

Fast forward to today. Lomatium is still virtually unknown, and there still isn’t a shred of formal research on it.  There isn’t a marketing push.  Nobody has ever gotten on the Oprah Show to tout it.

But the plant has had two strong advocates: the great naturopathic doctor, John Bastyr; and the great herbalist, Michael Moore.  It’s because of these two men, I believe, that the knowledge of Lomatium is still alive today.  Most everyone who uses Lomatium now can trace their knowledge back to either Moore or Bastyr, either directly, or indirectly, through one of their thousands of students.

And now, finally, the word is just beginning to get out, as fears about modern-day H1N1 have begun prompting people to look for solutions.

Bird flu, swine flu, three-toed sloth flu I don’t care. Lomatium shines in viral infections, period. I’ve been using it for over a decade, and I’ve never met a viral infection where it hasn’t at least made a dent. Even in infections where I didn’t expect it to work for example a friend with Hep C, who took Lomatium on the advice of a naturopathic doctor, and saw her viral load plummet it’s worked.  In Chronic Fatigue with a (presumed) viral component, it’s worked.  In shingles, it’s worked.  Michael Moore suggests using it for what he calls the “slow viruses”: HPV, Mono, Hep C, CMV, and (he suggests tentatively) HIV.

But Lomatium seems to specialize in viruses of the respiratory tract. Many of the plant’s antiviral compounds are excreted out through the mucosa of the lungs. So on their way out the body, they end up exactly where they’re needed. First, they thin congested, boggy mucous and work as a mild expectorant.  But again, we come back to where Lomatium shines: as a stone cold germ-killer. For deep lung infections, I have found nothing that can match our modest little Biscuitroot. And if you’re one of those people whose every little sniffle or sneeze ends up sinking its claws into your chest, Lomatium is invaluable at the first sign. It can still be effective after an infection has already established itself.

Lomatium is also useful topically. For example, if you’re dealing with a wart, try soaking the pad of a band-aid in the standard tincture of Lomatium, and apply it over the area before going to bed. You ought to see shrinkage in 4-5 days.

Suppositories made with Lomatium, Western Red Cedar, and vitamin A are a standard naturopathic protocol in viral infections of the cervix, although I have no direct experience here.

SAFETY: Lomatium may cause a skin rash in as many as 1% of the people who take it.  I’ve given Lomatium or Lomatium-containing products to close to 1,000 people, and I’ve heard of the rash four times. One was a woman who got it on her arms after taking Lomatium for a few days. She stopped taking the herb, and the rash went away a few days later. Another woman got a very mild rash on her neck, and continued taking the Lomatium because it was working so well. She just wore a turtleneck. The third woman got a head-to-toe rash and checked into the ER for some strong suppressive anti-inflammatories.  Finally, I just heard this week of someone who took my Lomatium-containing cold’n’flu formula who saw a mild rash develop a few days in.  The rash went away in a few days by itself.

There’s some debate in the medical herbalism community as to what causes the rash, and how to avoid it. Some say it depends on how the medicine is prepared. Lomatium is very rich in resins, they say, and there’s foam that should be skimmed from the top when you’re preparing it. Others cite Michael Moore’s take on the subject, which is that it’s not the herb itself, but a detox reaction to metabolic products of viral or bacterial die-off.  He says that in 30 years, he’s never seen the rash in people who take Lomatium along with herbs that support detox.  I’m not sure who I agree with. But, die-off or not, coincidence or not, I’ll say that I’ve only once seen the rash in people taking a good, Lomatium-based formula, with good supportive herbs.