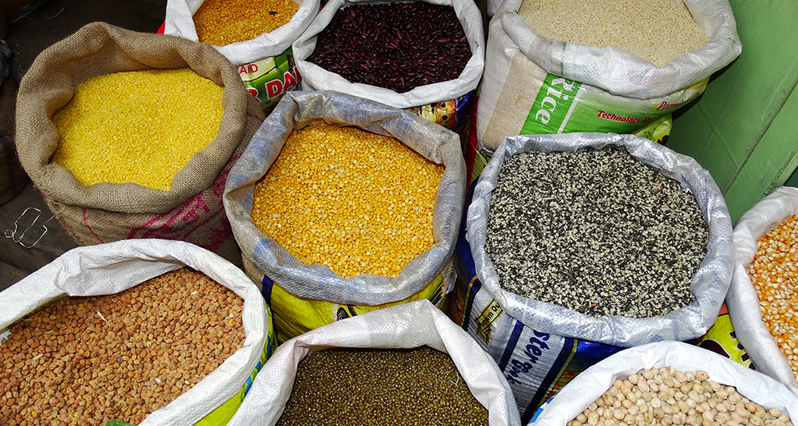 Pulses, or legumes, are the family of foods that include beans, peas and lentils.  Image of Pulses for Sale courtesy of Adam Jones via Flickr.

Martha Rose Shulman, food writer for The New York Times, says that if you have lentils, you have dinner.  She’s right, and lentils have been around forever.  In the Old Testament, Esau traded his inheritance to Jacob for a bowl of lentil soup.  Believed to have originated in central Asia, lentil seeds have been found around the world, some in Middle Eastern agricultural villages that date back to 6,000 BCE, and in Egyptian tombs to 2,400 BCE.  Did you know that in those days, lentils were not only eaten, but used as packing material?  It seems 2.8 million pounds of red lentils cushioned an obelisk that traveled from Egypt to the Vatican City where it still resides in front of St. Peter’s Basilica!

Today we’ve gone on to other packing materials, and lentils are often considered to be “the poor man’s meat.” In Catholic countries, for instance, those who can’t afford fish eat lentils during Lent instead.

Lentils have always been one of my favorite foods, theoretically, that is.  I know how healthy (there’s that word…) they are, I know that I enjoy them when I eat them, but I don’t eat lentils often enough.  I opt instead for more “glamorous” foods.  So I made a simple resolution – eat lentils – green, brown, yellow, red, black – at least twice per week.

Why?  There are many reasons.  A cup of cooked lentils contains 18 grams of protein (protein keeps our skin, hair, teeth and nails strong and healthy), only 230 calories and virtually no fat.  Compare that cup of lentils to a quarter pounder hamburger with 24 grams of protein, but which weighs in at roughly 450 calories and about 19 grams of fat (7 grams of that saturated).   Winner in round one?  Lentils versus the Big Mac?  Lentils!

In addition, lentils contain folate, magnesium, manganese, fiber, and thiamin and lots of fiber.  Fiber in the burger?  Zippo. That fiber in lentils balances blood sugar levels and helps control cholesterol.  Lentils have soluble and insoluble fiber, but it’s the soluble fiber that helps prevent constipation.  (Hard to be happy when you’re constipated, isn’t it?)  As a complex carbohydrate, lentils provide long-lasting energy too.

The Nurses’ Health Study II, conducted in 1991 and 1995, found that the 90,630 women who participated had a significantly (24%) reduced frequency of breast cancer if they ate lentils (or other beans) two or more times a week.  The study found that other good foods such as onions, apples, broccoli, blueberries and string beans did not produce the same protective effect.

Because lentils are inexpensive, nutrient dense, easy to grow (during World War II, Americans were encouraged to eat lentils to help the wartime economy) and versatile, the rest of the world eats them almost daily.  They’re a staple dish in many countries, often combined with rice, and lend themselves to dishes with infinite variations. Think of lentils in Mexican chili, lentils in French salads with goat cheese, lentils in curries in India, and in hearty Russian mushroom soups.

In Egypt, a national dish is kushari, which is rice, brown lentils, chickpeas, pasta, garlic, salsa, and vinegar.  India grows more than 50 varieties of lentils, and Indians eat more lentils than any other country. Dal, a type of Indian lentil stew is spiced with cumin, cayenne, garlic and garam masala.

The medicine of India says that lentils are beneficial to the heart and circulation, that they stimulate the adrenals and increase vitality of the kidneys.

Nestor Lejun, on his website “The Legume Chef” said that lentils were avoided in the Middle Ages because doctors “believed that lentils caused epilepsy and madness, a belief that has endured almost to our own day.”

The National Lentil Festival started in 1989 in Washington state says, tongue in cheek, that lentils may act as an aphrodisiac, or at least they were believed to be an aphrodisiac in ancient Egypt.  The festival organizers also write that Egyptians believed lentils “enlightened the minds of children, making them more cheerful and studious.”  Today lentils are recommended for nursing moms because they’re so nutritious and rich in calcium.

I always say that one can feed an army with a handful of lentils, and without breaking the bank too.   And unlike most other beans, lentils don’t need to be soaked before cooking.

How to cook lentils?  In a saucepan, add 2-3 cups of water for each cup of dried lentils.  Bring water to a boil, add lentils, reduce heat to a low simmer and cover pot.  Brown lentils take about 25-35 minutes to cook, green ones about 30 minutes, red lentils about 10-15 minutes, yellow lentils about 45-60 minutes.  If you’re cooking lentils for a salad, remove them from the heat about 10 minutes earlier.  For softer lentils to be used in a dish like Dal, simmer another 10-15 minutes.

We eat way too much pasta in this country.  Next time you make pasta for family or friends, try “cutting it” by adding some cooked lentils.  Try tossing less pasta with the lentils, steamed broccoli florets and lots of pressed garlic, extra virgin olive oil, pecorino Romano, and plenty of pepper.   Try tossing your potato salad with some black lentils.  Whatever soup you’re making, throw in a handful of lentils.  Remember that the Greek playwright Aristophanes called lentil soup the “sweetest of delicacies.”

There are thousands of recipes with lentils.  There are stews, casseroles, stuffed peppers, and lentils with meats or seafood. There are lentil vegetable curries.

It’s typically hot in the summer, so I cook my pot of lentils in the cool or the morning and divvy them up into glass jars.  One or two jars get put in the frig, and the rest into the freezer so they’re there when I want them.  So what am I having for dinner tonight?  Cut up cukes, lots of diced heirloom tomatoes, some mint, some basil, some crumbled feta, lentils, and a good dousing of extra virgin olive oil with black pepper.  Yum.

Tomorrow night I might combine my cooked lentils with steamed broccoli and diced Yukon gold potatoes.  Again with a hearty pour of olive oil, lots of chopped red onion and some oregano.

The important message is, “Eat lentils!”  What if each of us replaced a burger with a cup of lentil soup, and in so doing take responsibility in a delicious way for our own health and well-being?  Could we use lentils to lower our cholesterol levels, for instance?  Could we use them to help balance our blood sugar?  And, I wonder, could we even grow our own lentils here in New England?  To lentils, and here’s looking at you, babe! (A slightly different version ran in the Beacon papers in January.)