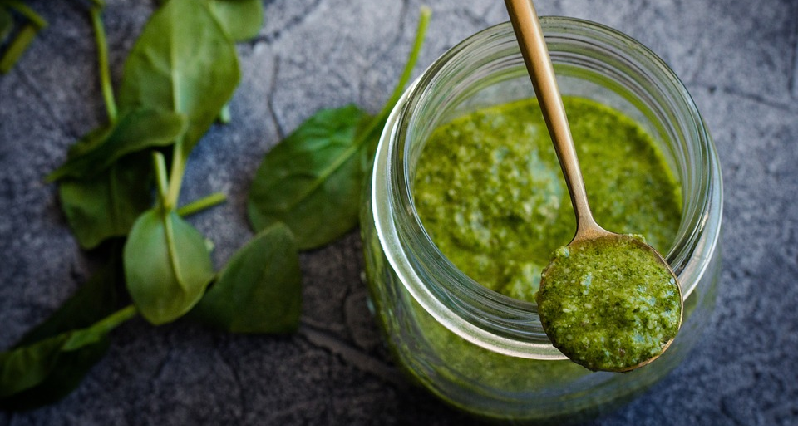 I fell in love with Kurt’s recipe back in the summer of 2002. Kurt is baking bread at the Orchard Hill Breadworks in VT.  He swings by from time to time bearing the gift of whole grain loaves baked the old-fashioned way.

Kurt writes, “One time Adam asked the Gaia Herb rep what the best herb for general health was.  The rep said basil and explained to us that it was the best overall tonic for the body.  Pecans in this recipe add healthy fatty acids to the mix, and of course there are all those benefits that come from fresh garlic.  If raw olive oil (like Bariani olive oil, which we carry) is used, this pesto can be a 100% raw recipe.  Could this be the healthiest recipe ever at Debra’s Natural Gourmet?

Use a food processor or blender to mix the ingredients.  Start with the pecans and garlic.  Once that is chopped fine, add the basil.  Then the oil and then other stuff.  Different oils can be used too.  Try a bit of Austrian pumpkinseed oil in there for a unique taste.  And Celtic or Himalayan sea salt really is the way to go.

Pesto can be used as topping or a dip for all kinds of stuff.  The possibilities are endless:  pasta, crackers/bread, appetizers, tomatoes, celery and other veggies, sandwiches, eggs, fish…..and even bacon.  It can be made in big batches and frozen for later use.  Giant quantities can be made in a 5 gallon pail with a (clean) weed-wacker.  Be sure to divide into small portions before freezing.”  So said Kurt in 2002.

Kurt’s pesto works with any kind of nut or seed.  It’s the only pesto I’ve liked without Pecorino Romano.